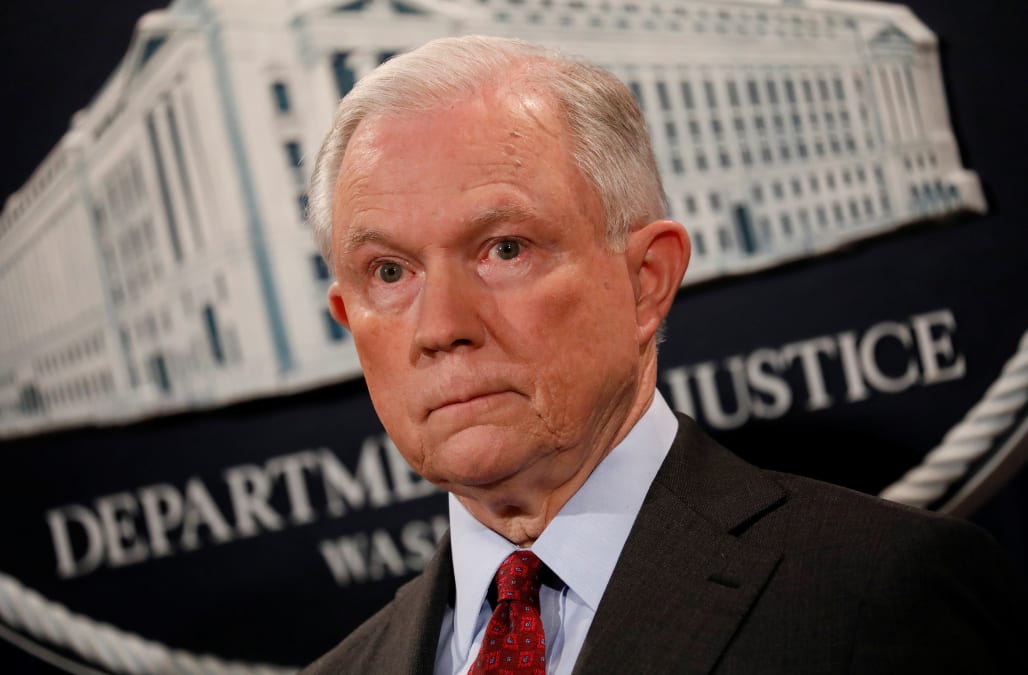 The White House's tumultuous relationship with the Justice Department has deteriorated further in recent days, with the president publicly attacking his attorney general in interviews and on Twitter and his new communications director suggesting he asked the FBI to investigate his West Wing rivals.

Some former officials have construed the episodes as attempts by President Donald Trump and the White House communications director, Anthony Scaramucci, to project a degree of control over the DOJ. That perception intensified on Thursday when a top Justice Department official delivered an unannounced briefing at the White House on anti-gang efforts.

The official, Rob Hur, the principal associate deputy attorney general, was joined by the acting director of Immigration and Customs Enforcement. But the briefing, combined with Trump's characterization of Attorney General Jeff Sessions as "beleaguered" and Scaramucci's suggestion that the FBI gave him "digital fingerprints" of alleged White House leakers, has stoked fears of an increasingly politicized — and potentially delegitimized — Department of Justice.

"All of the episodes are disconcerting," said William Yeomans, a former deputy assistant attorney general who spent 26 years at the Justice Department.

Trump's attacks on Sessions, stemming from his anger about Sessions' recusing himself from the Russia investigation, "demonstrate again that Trump has no sense of the rule of law, or of the fact that the attorney general is beholden to the law and is not Trump's personal lawyer," Yeomans said.

The White House and DOJ did not respond to requests for comment.

Sessions has said the attacks were "kind of hurtful" but given no indication that he plans to resign. And he has reportedly been working on getting back in Trump's good graces by pursuing leakers more aggressively, something that Trump indicated in a press conference Wednesday was another point of friction between them.

Thursday's briefing was another unforced error.

"The DOJ has a perfectly good press room for significant announcements," Yeomans said. "Moving them to the White House dissolves the necessary separation between the White House and law enforcement when it comes to criminal investigations and prosecutions."

"Forget Russia recusal," he tweeted. "Sessions is still breaking the WH/DOJ wall in a million ways."

He continued: "All these little things — inappropriate contacts & press release language, DOJ staff at the WH — add up to one big thing: politicization of DOJ."

'I will be contacting' the FBI and DOJ

Perhaps the most striking episode, however, was Scaramucci's expletive-laden interview with The New Yorker on Wednesday night in which he threatened to sic the FBI on people he believed to be White House leakers.

"I've got digital fingerprints on everything they've done through the FBI and the f------ Department of Justice," Scaramucci said.

"The greatest threat in our democracy to the rule of law is using our criminal justice system to go after people for political reasons," Yeomans said. "Asking the FBI to investigate infighting in the White House is a stunning misuse of the FBI's power and would drag the bureau into the middle of the political thicket."

The bureau would most likely decline, since it is traditionally averse to — and wary of — politicization. Former FBI Director James Comey has said this is why he went to such great lengths last year to avoid the perception that his investigation of Hillary Clinton's use of a private email server had been tainted by Attorney General Loretta Lynch's tarmac meeting with former President Bill Clinton.

"The FBI is full of highly trained and experienced law-enforcement officers and intelligence professionals who know that a person using this type of loud, threatening, bullying behavior usually has nothing to back it up," said Scott Olson, a recently retired FBI agent who spent more than two decades at the bureau.

"I can't imagine anyone at the FBI is particularly impressed with Scaramucci," he said.

'There is something more insidious happening'

As Carrie Cordero, a former DOJ counsel, wrote recently, Trump's feud with the Justice Department long predated Scaramucci's appointment and the events of the past week.

Cordero noted that Trump fired acting Attorney General Sally Yates in January when she refused to defend his executive order on immigration and that he dismissed Comey after he refused to state publicly that Trump was not personally under FBI investigation.

In an op-ed on Friday, Yates warned against the White House encroaching on the DOJ.

"The spectacle of President Trump's now daily efforts to humiliate the attorney general into resigning has transfixed the country," Yates wrote. "But while we are busy staring at the wreckage of Attorney General Jeff Sessions' relationship with the man he supported for the presidency, there is something more insidious happening."

"President Trump's actions appear aimed at destroying the fundamental independence of the Justice Department," Yates said. "All the while, he's ripping the blindfold off Lady Justice and attempting to turn the department into a sword to seek vengeance against his perceived enemies and a shield to protect himself and his allies."

Cordero recommended the country "take note of who he is firing or pressuring to resign in his first six months in office."

"These are the senior government officials responsible for the equitable enforcement of our laws," she wrote.

Dan Goldberg, a former chief of the DOJ's Office of Legislative Affairs, argued that Trump's distaste for the department's independence went back to his presidential campaign, when he disparaged US District Judge Gonzalo Curiel based on his Mexican heritage.

"It's been very clear from the get-go that this president does not respect the rule of law," said Goldberg, now the legal director of the progressive judicial-advocacy group Alliance For Justice. "And it's remarkable."

Goldberg pointed to a memo written in 2009 by Eric Holder, then the attorney general, that set out guidelines "to govern all communications" among DOJ representatives, the White House, and Congress.

"The legal judgments of the Department of Justice must be impartial and insulated from political influence," the memo reads. "It is imperative that the department's investigatory and prosecutorial powers be exercised free from partisan consideration."

Goldberg emphasized that while much attention had been paid to these high-profile attacks, "the vast majority of DOJ employees are apolitical, outstanding civil servants who walk into work every day with one goal: to properly enforce the Constitution and the rule of law."

"The politicization at the top of the DOJ is deeply disconcerting," he said. "But I'm confident that most of the department's civil servants are continuing to serve their country admirably."

SEE ALSO: Graham: If Trump goes after Mueller, it 'could be the beginning of the end' of his presidency
NOW WATCH: A Harvard mathematician reveals how algorithms are making police and the courts more biased