‘Get a Roof, Get Some Weed:’ Colorado roofing company offers customers $500 in marijuana 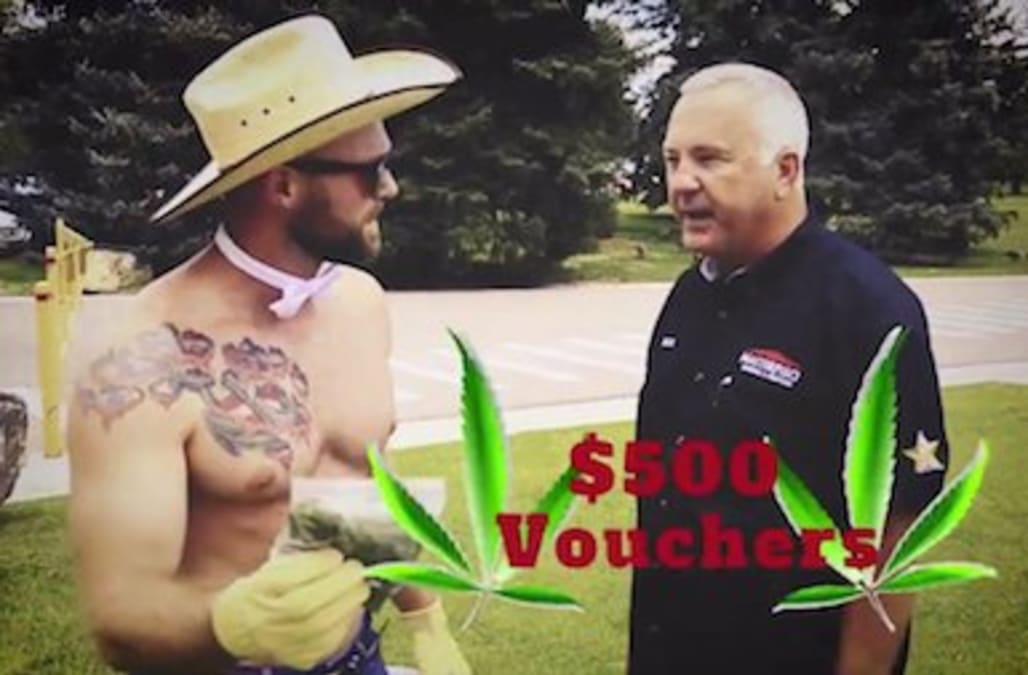 "Denver's #1 roofing company is offering YOU some free 'grass' with every roof that we install. We are taking roofing to the next level, 'higher' if you will," Masterpiece Roofing & Painting stated on Facebook.

In the video posted on Facebook, Zach Blenkensopp, wearing short jean shorts, a bow tie, a cowboy hat and boots, tells Rex "the Roofer" Corley the company is offering customers $500 in "vouchers" for marijuana.

The video posted on Saturday had been viewed nearly 90,000 times in two days.

According to its website, Masterpiece Roofing has an A-plus rating with the Better Business Bureau.

What marijuana really does to your body and brain

Marijuana can make you feel good

One of weed's active ingredients, tetrahydrocannabinol (THC), interacts with our brain's reward system, the part that has been primed to respond to things that make us feel good, like eating and sex.

When overexcited by drugs, the reward system creates feelings of euphoria. This is also why some studies have suggested that excessive use can be a problem in some people: The more often you trigger that euphoria, the less you may feel for other rewarding experiences.

In the short-term, it can also make your heart race

Within a few minutes of inhaling marijuana, your heart rate can increase by 20 to 50 beats a minute. This can last anywhere from 20 minutes to three hours, according to the National Institute on Drug Abuse.

A worker tends to cannabis plants at a plantation near the northern Israeli city of Safed June 11, 2012. It is here, at a medical marijuana plantation atop the hills of the Galilee, where researchers say they have developed marijuana that can be used to ease the symptoms of some ailments without getting patients high. Picture taken June 11, 2012. REUTERS/Baz Ratner (ISRAEL - Tags: HEALTH DRUGS SOCIETY TPX IMAGES OF THE DAY)

One of the ways scientists think it may help with pain is by reducing inflammation, a component of painful illnesses like rheumatoid arthritis.

Other studies testing both other cannabinoid products and inhaled marijuana have shown similar pain relieving effects, according to the report.

... or the pain of inflammatory bowel disease.

Some people with inflammatory bowel diseases like Crohn's and ulcerative colitis could also benefit from marijuana use, studies suggest.

A 2014 paper, for example, describes two studies of chronic Chron's patients in which half were given the drug and half were given a placebo. The first study showed a decrease in symptoms in 10 of 11 subjects on cannabis, compared with just four of 10 on the placebo. But when they did a follow-up study using low-dose cannabidiol they saw no effect in the patients.

Researchers say that for now, we need more research before we'll know whether or not cannabis can help with inflammatory bowel conditions.

Marijuana may also be helpful in controlling epileptic seizures

A drug called Epidiolex, which contains cannabidiol (the marijuana component mentioned above in slide No. 3) may be on its way to becoming the first of its kind to win approval from the Food and Drug Administration for the treatment of rare forms of childhood epilepsy. The company that makes it, GW Pharma, is exploring cannabidiol for its potential use in people with Dravet syndrome and Lennox-Gastaut syndrome, a rare form of childhood-onset epilepsy that is associated with multiple types of seizures.

In March the company came out with phase-three trial data that showed positive results of the drug.

It may throw off your balance, as it influences activity in the cerebellum and basal ganglia, two brain areas that help regulate balance, coordination, reaction time, and posture.

And it can distort your sense of time

Feeling as if time is sped up or slowed down is one of the most commonly reported effects of using marijuana. A 2012 paper sought to draw some more solid conclusions from some of the studies on those anecdotal reports, but it was unable to do so.

In 1998 study focusing on the brains of volunteers using magnetic resonance imaging, the authors noted that many had altered blood flow to the cerebellum, which most likely plays a role in our sense of time.

Limitations on what sort of marijuana research is allowed make it particularly difficult to study this sort of effect.

Since weed makes blood vessels expand, it can give you red eyes.

And you'll probably get the munchies

A case of the munchies is no figment of the imagination — both casual and heavy marijuana users tend to overeat when they smoke.

Marijuana may effectively flip a circuit in the brain that is normally responsible for quelling the appetite, triggering us to eat instead, according to a recent study in mice.

It all comes down to a special group of cells in the brain that are normally activated after we have eaten a big meal to tell us we've had enough. The psychoactive ingredient in weed appears to activate just one component of those appetite-suppressing cells, making us feel hungry rather than satisfied.

Marijuana may also interfere with how you form memories

It can mess with your memory by changing the way your brain processes information, but scientists still aren't sure exactly how this happens. Still, several studies suggest that weed interferes with short-term memory, and researchers tend to see more of these effects in inexperienced or infrequent users than in heavy, frequent users.

Unsurprisingly, these effects are most evident in the acute sense, immediately after use, when people are high.

According to the new NASEM report, limited evidence showed a connection between cannabis use and impaired academic achievement, something that has been shown to be especially true for people who begin smoking regularly during adolescence (which has also been shown to increase the risk for problematic use). Importantly, in most cases, saying cannabis was connected to an increased risk doesn't mean marijuana use caused that risk.

(Photo by Christopher Furlong/Getty Images)
And in some people, weed could increase the risk of depression

Scientists can't say for sure whether marijuana causes depression or whether depressed people are simply more likely to smoke. But one study from the Netherlands suggests that smoking weed seemed to raise the risk of depression for young people who already have a special serotonin gene that could make them more vulnerable to depression. Those findings are bolstered by the NASEM report, which found moderate evidence that cannabis use was linked to a small increased risk for depression.

The NASEM report also found substantial evidence for an increased risk of developing schizophrenia among frequent marijuana users, something that studies have shown is a particular concern for people at risk for schizophrenia in the first place.

Researchers think it's possible that CBD might be a useful treatment for anxiety disorders in general, and that's something that several institutions are currently trying to study.

And in general, the recent report thought the evidence that marijuana increased risk most anxiety disorders was limited.

Most importantly, regular weed use is linked with some specific brain changes — but scientists can't say for sure whether one causes the other

In a recent study, scientists used a combination of MRI-based brain scans to get a better picture of the brains of adults who have smoked weed at least four times a week for years.

Compared with people who rarely or never used, the long-term users tended to have a smaller orbitofrontal cortex, a brain region critical for processing emotions and making decisions. But they also had stronger cross-brain connections, which scientists think smokers may develop to compensate.

Still, the study doesn't show that pot smoking caused certain regions of the brain to shrink; other studies suggest that having a smaller orbitofrontal cortex in the first place could make someone more likely to start smoking.

Most researchers agree that the people most susceptible to brain changes are those that begin using marijuana regularly during adolescence.

Yet perhaps surprisingly, the report's authors found moderate evidence that cannabis was not connected to any increased risk of the lung cancers or head and neck cancers associated with smoking.

Certain athletes, especially in endurance and certain adventure sports, say that marijuana use can boost their athletic performance. This may be due to anti-inflammatory or pain-relieving effects that make it easier to push through a long workout or recover from one.

At the same time, there are ways that marijuana could impair athletic performance by affecting coordination and motivation or by dulling the body's natural recovery process.

Without more research, it's hard to know how marijuana affects athletic performance for sure.

According to the new NASEM report, there's substantial evidence showing a link between prenatal cannabis exposure (when a pregnant woman uses marijuana) and lower birth weight and there was limited evidence suggesting that this use could increase pregnancy complications and increase the risk that a baby would have to spend time in the neonatal intensive care unit.

There are still so many questions about how marijuana affects the body and brain that scientists say far more research is needed.

Based on the report and conversations with researchers, there are good reasons to think marijuana has potentially valuable medical uses. At the same time, we know that — like with any substance – not all use is risk free.

In order to figure out how to best treat the conditions that cannabis can help with and to minimize any risks associated with medical or recreational use, more study is needed.

That research is essential so that we know "how best we can use it, what are the safest ways, and what are the real risks," Staci Gruber, an associate professor of psychiatry at Harvard Medical School and director of the Marijuana Investigations for Neuroscientific Discovery program at McLean Hospital, told Business Insider.


COLOMBIA-CANNABIS/MEDICAL REUTERS/John Vizcaino
Up Next