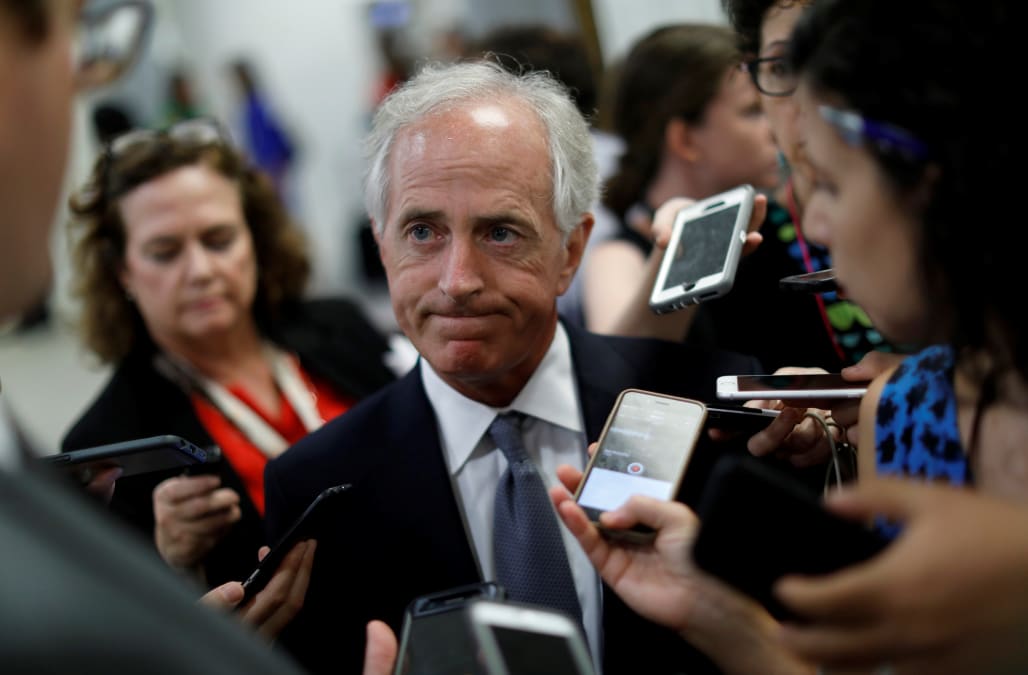 WASHINGTON, July 25 (Reuters) - The U.S. House of Representatives is expected to vote overwhelmingly on Tuesday for a bill that would slap new sanctions on Russia, Iran and North Korea, potentially complicating President Donald Trump's hopes of pursuing improved relations with Moscow.

The bipartisan measure aims to punish Russia for its 2014 annexation of Crimea from Ukraine and for alleged interference in the 2016 U.S. presidential election. The measure's fate in the Senate is uncertain after a key senator said the deal announced over the weekend may not be final.

"We're about there, there's still some procedural issues we're discussing but, you know, I think it worked out very, very well. We've still got a couple of things to talk about on North Korea," Corker said.

If the Republican-led Senate passes the measure, Trump will need to decide whether to sign the bill or veto it. Rejecting it would carry a risk that his veto could be overridden by lawmakers.

The Trump administration has objected to a provision in the sanctions bill that the president obtain congressional approval before easing any sanctions on Moscow.

"He's going to study that legislation and see what the final product looks like," White House spokeswoman Sarah Sanders told reporters on Monday, when asked whether Trump would support it.

An earlier version of the bill, including sanctions on Russia and Iran, passed the Senate by 98-2 on June 15. A North Korea sanctions bill passed the House by 419-1 in May and House lawmakers were becoming increasingly impatient with the Senate's failure to take up that legislation.

House members saw the Iran and Russia sanctions bill as a chance to finally get the North Korea measure through the Senate.

Trump's relationship with Russia has been an issue during the first six months of his presidency as investigations continue into whether his associates colluded with Russian hackers to influence the election on his behalf.

Russia denies interfering in the U.S. election. Trump has denied his campaign colluded with Moscow, calling the probes politically motivated and repeatedly criticizing them.

In a series of tweets early on Tuesday, Trump lashed out at both U.S. Attorney General Jeff Sessions and Andrew McCabe, acting director of the Federal Bureau of Investigation. Without offering evidence, Trump cited "Ukrainian efforts to sabotage" his presidential campaign in order to aid his former Democratic rival, Hillary Clinton.

Jared Kushner, Trump's son-in-law and senior White House adviser, will visit Capitol Hill for a second straight day to be interviewed about his contacts with Russian officials during the 2016 campaign and the presidential transition.

Trump on Tuesday praised Kushner, saying he had done "very well yesterday in proving he did not collude with the Russians." (Additional reporting by Steve Holland and Susan Heavey; Editing by Peter Cooney and Jeffrey Benkoe)

More from AOL.com:
Trump open to signing Russia sanctions legislation
'This is going to be a long ride': Jeb Bush blasts Trump and Republicans over their handling of the Russia investigation
New poll suggests Trump's standing with base voters slightly improved