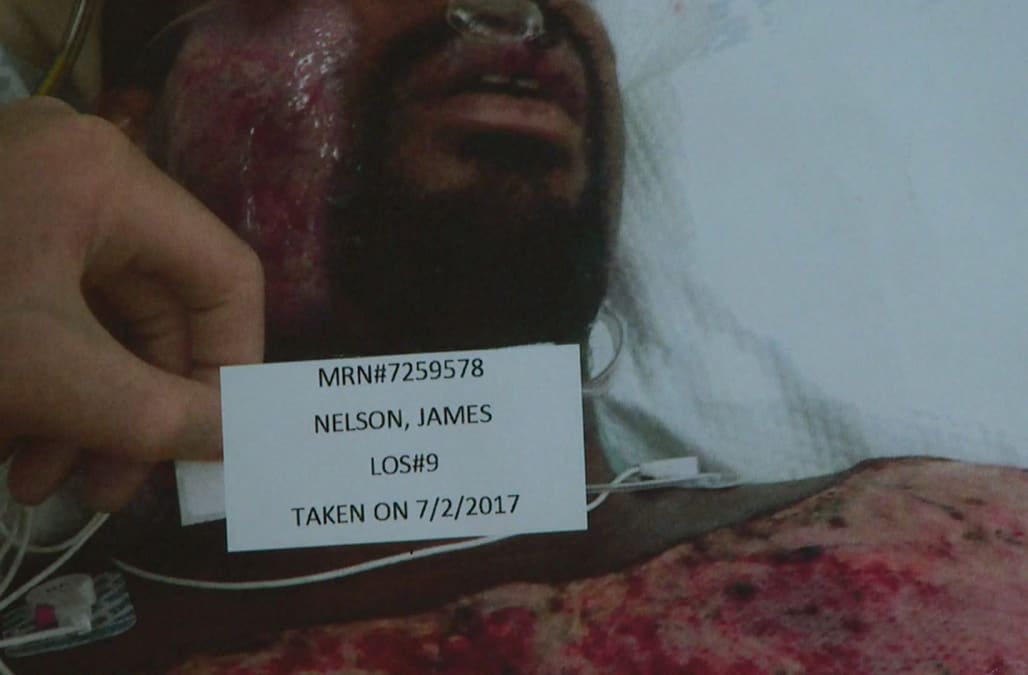 A California family is demanding answers after a man sustained life-threatening injuries after being pinned to the ground by police during his arrest on a 101-degree summer day.

KTXL reports that James Nelson, 28, has been in a hospital burn unit for 29 days with second and third degree burns covering 45 percent of his body following his June arrest at a KFC restaurant in Citrus Heights, California.

Relatives of Nelson allege that methods used by police to control him during his arrest were cruel and unnecessary.

"His whole abdomen, all the way up to his neck, his neck, the whole right side of his face is burned, and then they took skin off his quads, so his quads is all ripped up," Nelson's mother, Tarsha Ross, told the outlet. "So he's just a bloody mess."

Ross claims that her son was having a schizophrenic episode and that responding officers "tortured" him and exaggerated his behavior to justify their response.

"To serve to help and protect! Not to cause harm!" Ross said. "And they harmed my son and they left him for dead. That's how I feel! And now they won't give me no answers."

But despite Ross' claims, Lieutenant David Gutierrez of the Citrus Heights Police Department maintains that officers responding to the scene followed protocol and took necessary action to keep bystanders safe.

"Protocol is to take control of the scene and safely detain individuals," Gutierrez told KTXL. "They also have to protect themselves and protect the community. Mr. Nelson was only on the ground long enough to safely control him."

Gutierrez claims that Nelson was acting erratically, threatening customers and employees, and that he appeared to be on drugs.

Surveillance video released from inside the KFC at the time of Nelson's arrest seems to corroborate the police department's story.