By Emily Flitter and Valerie Volcovici 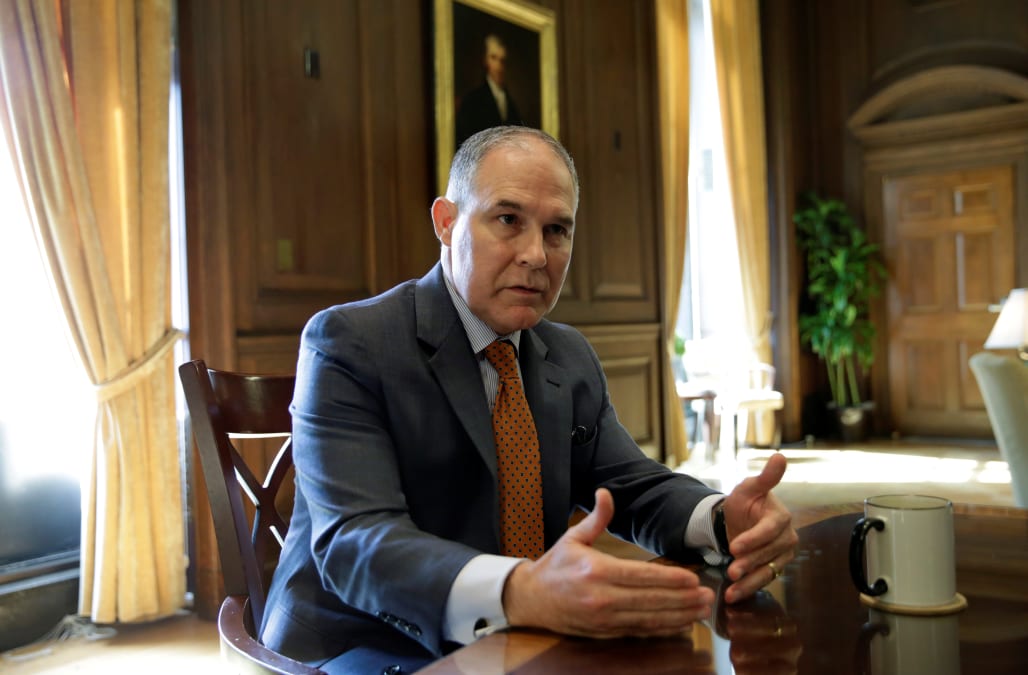 July 24 (Reuters) - The head of the U.S. Environmental Protection Agency, Scott Pruitt, was in his home state of Oklahoma on at least 43 of the 92 days of March, April and May, according to copies of his travel records obtained by the Environmental Integrity Project watchdog group and reviewed by Reuters.

Pruitt's frequent visits to Oklahoma have raised concerns among critics that he is cultivating political relationships in the state at taxpayer expense, instead of focusing on his job as head of the environmental regulator. EPA officials contend that Pruitt works hard and pays for his trips home to Tulsa to see his wife and children.

"Administrator Pruitt works long hours and is available around the clock," said EPA spokeswoman Liz Bowman. "He is extremely focused and disciplined, which is evident by the fact that he spearheaded over two dozen significant regulatory actions since being sworn in."

Scott Pruitt, administrator of the Environmental Protection Agency (EPA), speaks to employees of the Agency in Washington, U.S., February 21, 2017.

Director of Environmental Protection Agency Scott Pruitt is sworn in by Justice Samuel Alito as his wife Marilyn holds a bible during ceremony at the Executive Office in Washington, U.S., February 17, 2017.

Oklahoma Attorney General Scott Pruitt testifies before a Senate Environment and Public Works Committee confirmation hearing on his nomination to be administrator of the Environmental Protection Agency in Washington, U.S., January 18, 2017.

Oklahoma Attorney General Scott Pruitt in a meeting at his office in Oklahoma City, July 29, 2014.

Pruitt has riled environmentalists by routinely raising doubts about the realities of climate change and by vowing to sweep away scores of Obama-era regulations rules to help business. Before becoming head of the EPA under Republican President Donald Trump, he was Oklahoma's attorney general and repeatedly sued the agency he now runs to block federal environmental rules.

The travel records show Pruitt's schedule this spring often took him to cities in the U.S. heartland where he held meetings – often with oil and gas industry representatives - made speeches and attended events, before flying to Tulsa for extended weekends.

The records showed Pruitt paid for some legs of the trips directly related to his visits home, although it was not clear he paid for all such legs. (Click here for images of Pruitt's travel schedule and travel vouchers: http://live.reuters.com/Event/Live_US_Politics/1028796938 and http://live.reuters.com/Event/Live_US_Politics/1028776777 )

The airfare for Pruitt's travel to and from Oklahoma totaled more than $12,000, the Environmental Integrity Project said. That did not include travel and lodging expenses for his staff or his security detail, the records for which were not immediately available.

The practice of spending long weekends away from Washington was seen as unusual by former officials.

McCarthy's family lived in Boston while she was head of the EPA, and she "fit travel home into her personal time," Purchia Gannon said.

A source who worked for former EPA Administrator Lisa Jackson, McCarthy's predecessor, said Jackson's family moved to Washington during her tenure, so she did not have to travel to see them. Jackson was not available for comment.