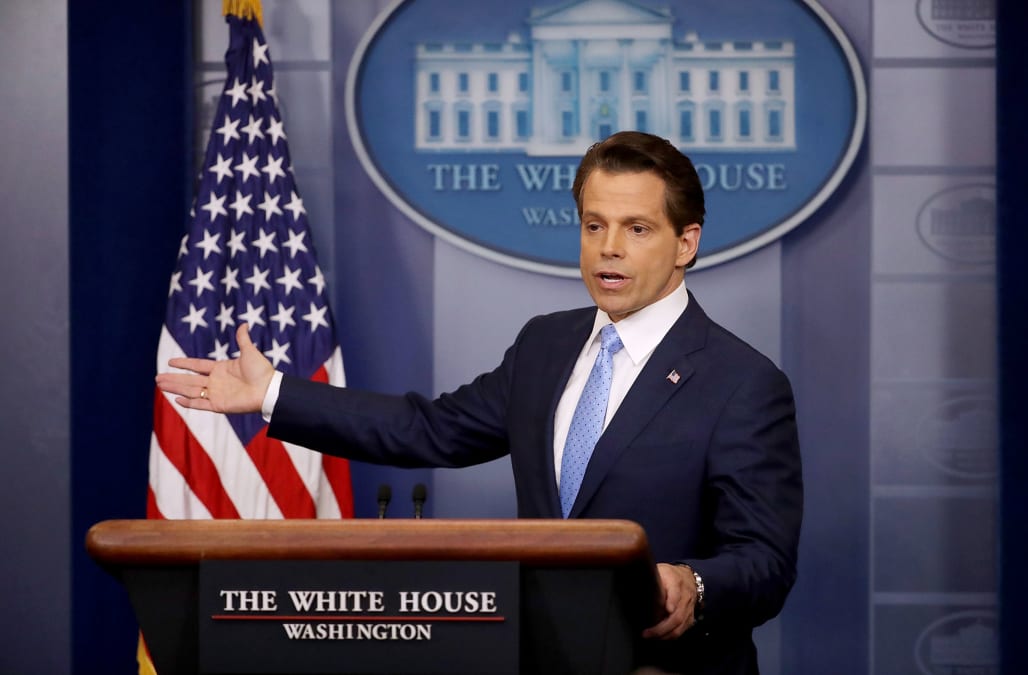 Anthony Scaramucci, who has been appointed to head the White House's communications operations, has a long history on Wall Street – and has been a big Trump backer and public advocate.

He previously worked at Goldman Sachs and later founded SkyBridge Capital, a fund of hedge funds firm that caters to America's rich dentists and doctors.

Sean Spicer, the White House's embattled press secretary, announced his resignation on Friday, reportedly after telling President Donald Trump that he strongly disagreed with the selection of Scaramucci.

Scaramucci is a household name on Wall Street, but relatively unknown elsewhere. Here's a primer.

He was hired, fired and then rehired at Goldman Sachs Scaramucci worked at Goldman Sachs for some time after graduating from Harvard Law School.

He was even fired before being rehired in a sales role, he recounted to reporters several years ago. Scaramucci had heralded SkyBridge as a way for America's dentists and doctors – who might not have enough money to access hedge funds directly – to put their money with hedge fund titans.

Still, the firm grew to billions in assets, much of that from relationships with Wall Street banks which directed their rich clients' money into the fund.

He has a love-hate relationship with the press Scaramucci loves media attention and courts it like a pro (including from Business Insider). Sometimes, it is to promote books, like one he wrote on entrepreneurship called "Hopping over the Rabbit Hole." He also hosts a TV show called Wall Street Week on Fox Business.

But he was also accused of threatening a columnist after he wrote something Scaramucci didn't like. Felix Salmon, a financial columnist, wrote for Reuters about his experience.

"I've seen another side to Scaramucci: my post about his wine tasting was followed by a series of irate phone calls and emails from him, not only to me but also to any and every senior Thomson Reuters executive he could think of. It's the steely competitor underneath the glad-handing exterior."

Scaramucci said he tried to get Salmon fired twice, though the two eventually made up.

More recently, he reportedly threatened to sue CNN over a story that it later retracted. When it did, and three staffers were let go, he tweeted ".@CNN did the right thing. Classy move. Apology accepted. Everyone makes mistakes. Moving on." Held annually at Las Vegas's ritzy Bellagio, it's a gathering of hedge fund managers, marketers and all sorts of sales people convened to hobnob, listen to hedge fund managers that SkyBridge invests in and party. The Killers even performed one year.

He has been one of Trump's biggest proponents on Wall Street Scaramucci has been one of Trump's biggest backers on Wall Street, and is not shy about it. He has touted the president at hedge fund events, on Twitter and on broadcast TV.

The day after Trump was elected in November, he told journalist Michelle Celarier that people need to take Trump at his word in an interview in New York magazine. Scaramucci was an outspoken critic of the Department of Labor's fiduciary rule, which required financial advisers to put their clients' interests ahead of theirs. It's a threat to fund-of-fund businesses because they pay referral fees to financial advisers.

Scaramucci had argued the rule would hurt investors because it would supposedly make it harder for people to get retirement advice; he argued, among other things, that advisers wouldn't be able to afford to service low-balance accounts.

The Wall Streeters opposing the rule had a lot at stake, particularly Scaramucci's SkyBridge and he wanted Trump to repeal it. The rule recently went into effect anyway earlier this year. Two senators earlier this year said that they would push for an investigation into whether Scaramucci violated sanctions with Russia. That's after it came out that Scaramucci talked about potential joint investments with a sanctioned Russian fund, Bloomberg News reported.

As Bloomberg reported in January: Scaramucci's "meeting with Kirill Dmitriev, head of the Russian Direct Investment Fund, a $10 billion state-run investment vehicle, is the first public contact between the incoming administration and Kremlin-backed business."

Scaramucci sold SkyBridge earlier this year to a Chinese company so he could work for Trump, but conflicts in that sale prevented him from taking on a job Scaramucci sold SkyBridge to a subsidiary of the Chinese conglomerate, HNA Group, which has ties to the country's Communist party. That sale – and the conflicts – initially bungled his chances at a Trump administration job earlier this year, according to the New York Times.

As Business Insider's Linette Lopez has pointed out, Treasury Secretary Steve Mnuchin must approve the HNA sale as part of the Committee on Foreign Investment in the US.

More from AOL.com:
Both men 'had enough of each other': Why Sean Spicer is really leaving Trump's White House
'We rough each other up a little': Scaramucci tries to move past friction with Reince Priebus
'Just look at his ratings!': Trump praises Spicer on his way out of the White House