'Out and out political warfare': Trump claims 'complete power to pardon' amid the White House's escalating war on Russia investigation 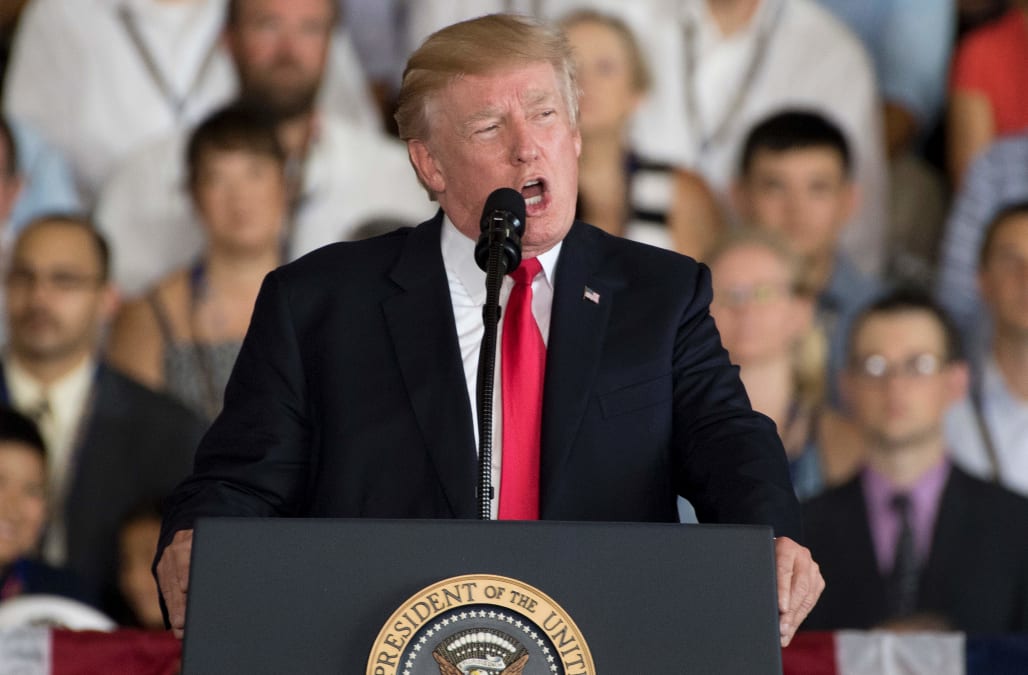 President Donald Trump pointed out his "complete power to pardon" individuals convicted of wrongdoing in his capacity as president on Saturday.

"While all agree the U. S. President has the completely power to pardon, why think of that when only crime so far is LEAKS against us.FAKE NEWS," Trump tweeted.

Trump's tweet came on the heels of a Washington Post report that said the president and his legal team were looking into the limits of his pardoning power, and that Trump had reportedly raised the question of whether he could pardon himself as congressional investigations and special counsel Robert Mueller's probe into the Trump campaign's ties to Russia widen in scope.

There is no constitutional precedent addressing whether a president can pardon himself, but legal experts said that if Trump did use his pardoning power in that way, it would prompt a legal and political firestorm.

"This is a fiercely debated but unresolved legal question," Brian C. Kalt, a constitutional law expert at Michigan State University who has written extensively on the question, told The Post. "There is no predicting what would happen," Kalt said, adding that if Trump did seek to pardon himself, the issue would likely go all the way up to the Supreme Court.

Louis Seidman, a constitutional-law expert and professor at the Georgetown University Law Center, told Business Insider on Friday that whether Trump can pardon himself is "very questionable" as "a matter of constitutional morality."

Seidman said the real question was why Trump would even need to pardon himself, given the protection from prosecution his office affords him and the unlikelihood that he would be charged after leaving office.

"The more serious threat is that Trump would either pardon everyone else or fire Mueller," Seidman said. "My own sense, for what it's worth, is that this outcome is very likely."

But firing Mueller or issuing pardons "would be certain to ignite the kind of political firestorm that we haven't seen since the Saturday Night Massacre," he said, and Trump's political opponents would undoubtedly paint it as obstruction of justice.

Indeed, it appears that Trump and his allies are ramping up their war on Mueller and planting seeds aimed at discrediting his investigation, possibly setting up a scenario in which Trump could fire the special counsel.

On Friday, White House counselor Kellyanne Conway told "Fox & Friends" that she thought it was important for the American people to know about Mueller's team's potential conflicts of interest while they investigate Trump and his associates.

Host Ainsley Earhardt pointed out that some members of Mueller's team had donated thousands of dollars to Democrats in the past.

"This is just a witch hunt," Conway said in response, repeating a frequent criticism Trump makes towards the ongoing probe. "It's all a hoax, and now they're going in all types of different directions, but I think that the information you just shared is relevant information for America to have. People should know what folks' past and their motivations and their political motivations are. These weren't minor donations."

Conway's statements echoed repeated criticisms Trump and his allies have made against Mueller's team in an effort to paint them as biased against the president.

Trump's legal team has also warned Mueller to stay within the scope of his inquiry. Jay Sekulow, a lawyer on Trump's team, told the Post on Thursday that they would go directly to Mueller to air their complaints if it became necessary.

"The fact is that the president is concerned about conflicts that exist within the special counsel's office and any changes in the scope of the investigation," Sekulow said. "The scope is going to have to stay within his mandate. If there's drifting, we're going to object."

Bloomberg reported on Thursday that Mueller was expanding his investigation to include Trump's past business dealings, and that he was drawing from an investigation opened by former US attorney for the Southern District of New York Preet Bharara, who was fired by Trump earlier this year.

Sekulow cited the Bloomberg report, which said Mueller's team was looking into, among other things, a 2008 business deal Trump made with a Russian oligarch.

"They're talking about real estate transactions in Palm Beach several years ago," Sekulow told the Post. "In our view, this is far outside the scope of a legitimate investigation."

Trump alsopublicly warnedMueller against investigating the Trump family's finances, saying that Mueller would be crossing a "red line" if he did so.

"Look, this is about Russia," Trump said. "So I think if he wants to go, my finances are extremely good, my company is an unbelievably successful company. And actually, when I do my filings, people say, 'Man.' People have no idea how successful this is. It's a great company. But I don't even think about the company anymore. I think about this.

"'Cause one thing, when you do this, companies seem very trivial. OK?" he continued. "I really mean that. They seem very trivial. But I have no income from Russia. I don't do business with Russia. The gentleman that you mentioned, with his son, two nice people [Russian billionaire Aras Agalarov and his pop-star son, Emin]. But basically, they brought the Miss Universe pageant to Russia to open up, you know, one of their jobs. Perhaps the convention center where it was held. It was a nice evening, and I left. I left, you know, I left Moscow. It wasn't Moscow, it was outside of Moscow."

The Agalarovs catapulted to the national spotlight earlier this month, when it emerged they had requested that a meeting be arranged between Donald Trump Jr. and a Russian lawyer with strong ties to the Kremlin last June during the presidential campaign. Mueller's office asked the White House on Friday to preserve all documents related to the meeting, indicating that the encounter had also become a focus of the investigation.

One West Wing official told Axios on Saturday that the president was in the process of building a "wartime Cabinet" because he may really fire Mueller. In the event that happens, the official said, Trump will need "a group that can fight through what could end up being something quite amazing."

"We're going to see out-and-out political warfare, and not over ... Medicaid," the official told Axios.

That assessment was echoed by Matthew Miller, the former Department of Justice spokesperson under President Barack Obama, who tweeted that "we are headed for certain crisis. Trump just will not, cannot allow this investigation to go forward."