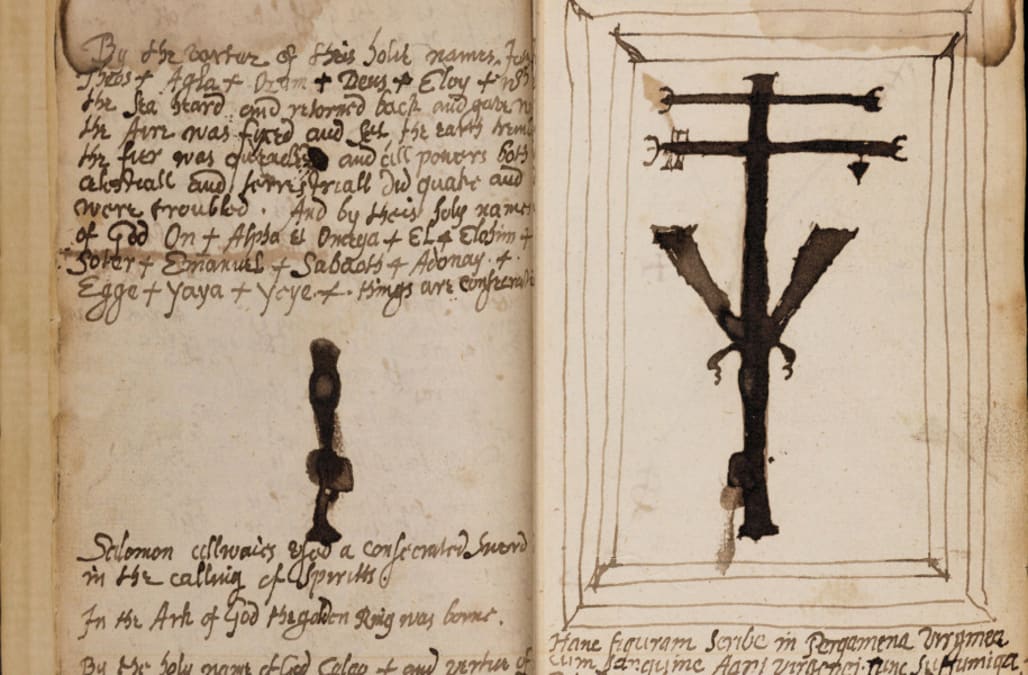 According to the Smithsonian, the Newberry Library in Chicago is crowdsourcing translations for three 1 century manuscripts dealing with charms, spirits and other manners of magical practice.

Titled "The Book of Magical Charms," "Cases of Conscience Concerning Witchcraft" and "The Commonplace Book," each of these three texts is handwritten in archaic Latin and English and currently are accessible online in the research library's "Transcribing Faith" portal.

Top signs of the 'biblical rapture'

There will be an unprecedented number of mass animal deaths

Hosea 4:1–3
"4 Hear the word of the Lord, O children of Israel, for the Lord has a controversy with the inhabitants of the land. There is no faithfulness or steadfast love, and no knowledge of God in the land; 2 there is swearing, lying, murder, stealing, and committing adultery; they break all bounds, and bloodshed follows bloodshed. 3 Therefore the land mourns, and all who dwell in it languish, and also the beasts of the field and the birds of the heavens, and even the fish of the sea are taken away."

Luke 21:25-26
"25 There will be signs in the sun, moon and stars. On the earth, nations will be in anguish and perplexity at the roaring and tossing of the sea. 26 People will faint from terror, apprehensive of what is coming on the world, for the heavenly bodies will be shaken."

The mark of the beast

Revelations 13:16-17
"16 Also it causes all, both small and great, both rich and poor, both free and slave, to be marked on the right hand or the forehead, 17 so that no one can buy or sell unless he has the mark, that is, the name of the beast or the number of its name."

First six seals must be broken

Revelation 6:12-14
"12 I watched as the Lamb broke the sixth seal, and there was a great earthquake. The sun became as dark as black cloth, and the moon became as red as blood. 13 Then the stars of the sky fell to the earth like green figs falling from a tree shaken by a strong wind. 14 The sky was rolled up like a scroll, and all of the mountains and islands were moved from their places."

The antichrist will make a seven-year covenant

Daniel 9:27
"He will confirm a covenant with many for one 'seven.' In the middle of the 'seven' he will put an end to sacrifice and offering. And at the temple he will set up an abomination that causes desolation, until the end that is decreed is poured out on him."

The third temple must be rebuilt

Isaiah 66:6
"A voice of uproar from the city, a voice from the temple, the voice of the Lord who is rendering recompense to His enemies."

A beast will rule the Earth

Daniel 7:23-25
“23 He gave me this explanation: ‘The fourth beast is a fourth kingdom that will appear on earth. It will be different from all the other kingdoms and will devour the whole earth, trampling it down and crushing it. 24 The ten horns are ten kings who will come from this kingdom. After them another king will arise, different from the earlier ones; he will subdue three kings. 25 He will speak against the Most High and oppress his holy people and try to change the set times and the laws. The holy people will be delivered into his hands for a time, times and half a time."

The power of the saints will shatter

The Apostasy will occur first

2 Thessalonians 2:1-3
"Now we request you, brethren, with regard to the coming of our Lord Jesus Christ and our gathering together to Him, that you not be quickly shaken from your composure or be disturbed either by a spirit or a message or a letter as if from us, to the effect that the day of the Lord has come. Let no one in any way deceive you, for it will not come unless the apostasy comes first, and the man of lawlessness is revealed, the son of destruction."

The man of lawlessness will be revealed

2 Thessalonians 2:1-4
"1 Concerning the coming of our Lord Jesus Christ and our being gathered to him, we ask you, brothers and sisters, 2 not to become easily unsettled or alarmed by the teaching allegedly from us—whether by a prophecy or by word of mouth or by letter—asserting that the day of the Lord has already come. 3 Don’t let anyone deceive you in any way, for that day will not come until the rebellion occurs and the man of lawlessness[a] is revealed, the man doomed to destruction. 4 He will oppose and will exalt himself over everything that is called God or is worshiped, so that he sets himself up in God’s temple, proclaiming himself to be God."

Gospel will be preached to the entire world

Matthew 24:14
"And this gospel of the kingdom will be preached in the whole world as a testimony to all nations, and then the end will come."

The church must be without spot or wrinkle

Ephesians 5:25-27
"25 Husbands, love your wives, just as Christ loved the church and gave himself up for her 26 to make her holy, cleansing[a] her by the washing with water through the word, 27 and to present her to himself as a radiant church, without stain or wrinkle or any other blemish, but holy and blameless."

Believers must do works of Jesus did

John 14:12
"Very truly I tell you, whoever believes in me will do the works I have been doing, and they will do even greater things than these, because I am going to the Father."

There shall be famine

Matthew 24:7
"For nation shall rise against nation, and kingdom against kingdom: and there shall be famines, and pestilences, and earthquakes, in divers places."

There will be an increase in sin

Matthew 24:12
"Because of the increase of wickedness, the love of most will grow cold,"

Christians will be killed

Matthew 24:9-10
"9 Then you will be handed over to be persecuted and put to death, and you will be hated by all nations because of me. 10 At that time many will turn away from the faith and will betray and hate each other,"

There will be a rise in spiritualism

1 Timothy 4:1
"The Spirit clearly says that in later times some will abandon the faith and follow deceiving spirits and things taught by demons."

"You don't need a Ph.D. to transcribe," Christopher Fletcher, the coordinator of the project, told the Smithsonian. "[The initiative] is a great way to allow the general public to engage with these materials in a way that they probably wouldn't have otherwise."

So far, Fletcher said experts have learned that "The Book of Magical Charms" -- which is believed to be handwritten by two unknown witches from England -- contains spells that are supposed to ease menstrual cramps, help you cheat in a game of dice and communicate with spirits.

"Cases of Conscience Concerning Evil Spirits," which was authored by Increase Mather, the Puritan minister who presided over the Salem Witch Trials, vilifies witchcraft and defends the executions of suspected witches.

"The Commonplace Book," meanwhile, is a collection of questions surrounding morality and religion that explore the ethical and moral implications of magical practice.

"Both Protestant and Catholic churches tried very hard to make sure that nobody would make a manuscript like this," Fletcher said. "They didn't like magic. They were very suspicious of it. They tried to do everything they could to stamp it out. Yet we have this manuscript, which is a nice piece of evidence that despite all of that effort to make sure people weren't doing magic, people still continued to do it."

"Ultimately, the crowdsourced contributions are making these manuscripts more accessible to researchers and they're setting the stage for fresh insights about the coexistence of Christianity and magic as well as the role that religion played in private and public life in the 16th and 17th centuries," Alex Teller, the director of communications for Newberry Library, told the Chicagoist.