What is glioblastoma? McCain’s brain tumor is an aggressive type of cancer 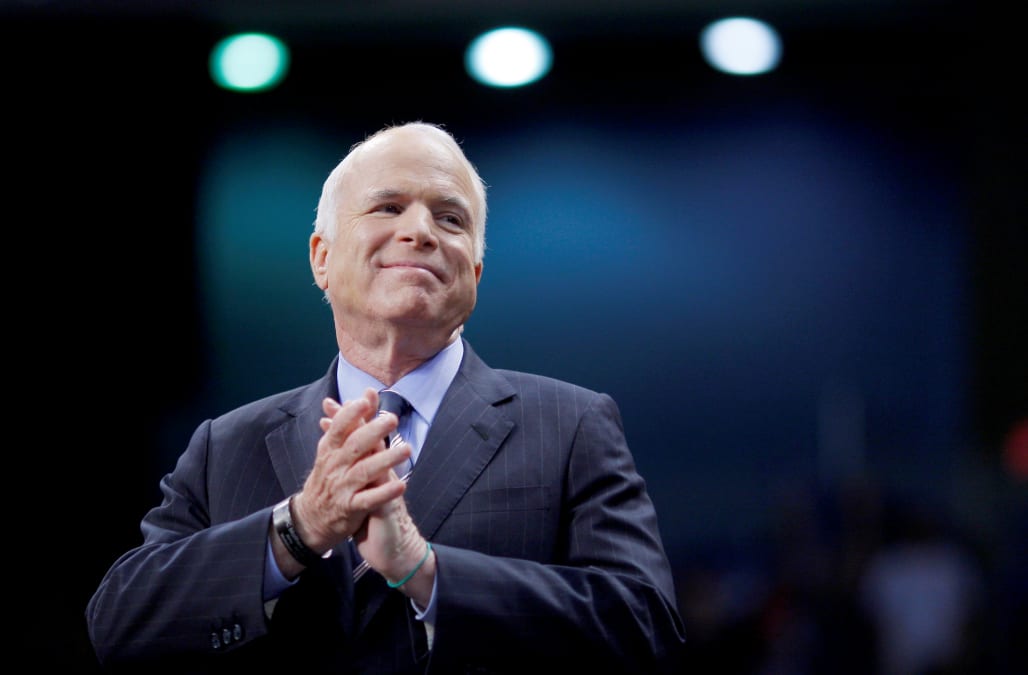 The type of brain tumor Sen. John McCain had removed Friday is an aggressive one known as a glioblastoma, a highly malignant form of cancer that spreads quickly due to its association with a large network of blood vessels in the brain.

The tumor was associated with a small blood clot above the Arizona Republican's left eye, which doctors removed Friday during a minimally invasive procedure, according to a statement issued by the senator's office Wednesday evening.

Scans completed since Friday indicate that doctors were able to remove all the tumor tissue they could see in the 80-year-old senator's brain. "The tissue of concern was completely resected by imaging criteria," the statement read. The procedure and surgery were performed by doctors at the Mayo Clinic Hospital in Phoenix.

"The Senator and his family are reviewing further treatment options with his Mayo Clinic care team. Treatment options may include a combination of chemotherapy and radiation," the statement said.

Here's what more we know about the type of cancer McCain was diagnosed with.

What is a glioblastoma?

A brain tumor is a mass of abnormal cells growing in the brain. They arise from star-shaped cells that make up the supportive tissue of the brain, also known as astrocytes or, more commonly, glioma.

In rare cases, brain and spinal cord cancers are found to run in families, but in most instances, people diagnosed with brain tumors have no family history of the disease, according to the American Cancer Society.

The ACS estimates that about 24,000 malignant tumors are diagnosed each year — about 3 in 10 brain tumors are glioblastomas.

Cancerous tumors of the brain and spinal cord differ from other tumors in the body. For one, glioblastomas don't spread to other organs.

Although the statement from McCain's office stated that doctors believe they removed all of the tumor tissue, microscopic pieces that look like a sea urchin's tentacles could remain and spread to other parts of the brain, according to NBC News medical correspondent Dr. John Torres. Because gliomas have often spread deep into the brain by the time of diagnosis, it is difficult for the cancerous tissue to be completely removed.

McCain has a history of melanoma, a deadly skin cancer that can spread to the brain. The cause of his brain tumor has not been determined, but a 2014 study published in the Annals of Epidemiology found that incidences of gliomas were greater among melanoma cases than in people who had never been diagnosed with skin cancer.

With any kind of brain mass, patients typically complain of symptoms such as double vision, forgetfulness or headaches, Torres said. These nonspecific symptoms make it nearly impossible to diagnose based on symptoms alone. Furthermore, symptoms may not persist. For example, headaches associated with a brain tumor may be more painful in the morning and improve during the day.

Some people are unaware they have a brain tumor until experiencing a seizure, according to the American Cancer Society. In 2009, Sen. Edward M. Kennedy died at age 77 from a malignant brain tumor after first suffering a seizure.

What are the next steps?

McCain's office had previously said he would be recovering from the blood clot procedure for at least the next week. Following this period of rest, treatment to eradicate any cancer cells that might be present typically ensues.

Treatment options might include a combination of chemotherapy drugs to attack the malignant cells and radiation on a daily basis, Dr. Torres said. It's possible McCain could return to the Senate while undergoing treatment, and the senator's statement said his Mayo Clinic care team will determine when, or if, he can get back to work.

What is the prognosis?

Unfortunately, "the prognosis for a glioblastoma is not very good," Torres said. The median survival rates range from 14 months to 3 years.

"The most important prognostic indicators are some of the molecular alterations in the tumor," said oncologist Dr. Andrew S. Chi, co-director of the Brain Tumor Center at New York University's Langone Medical Center, who is not involved in McCain's treatment. "Alterations in two genes in the tumor — IDH and MGMT — are the two most powerful prognostic indicators in gliomas. The status of these two genes will be determined over the next 2 weeks."

The veteran lawmaker, who fought in Vietnam and was a prisoner of war for more than 5 years, is known as a fighter. However, his advanced age could make recovery more difficult, as only about 10 percent of patients live longer than five years following diagnosis.

According to the official statement from McCain's office, "The Senator's doctors say he is recovering from his surgery 'amazingly well' and his underlying health is excellent."

McCain is currently recovering at his home in Arizona.