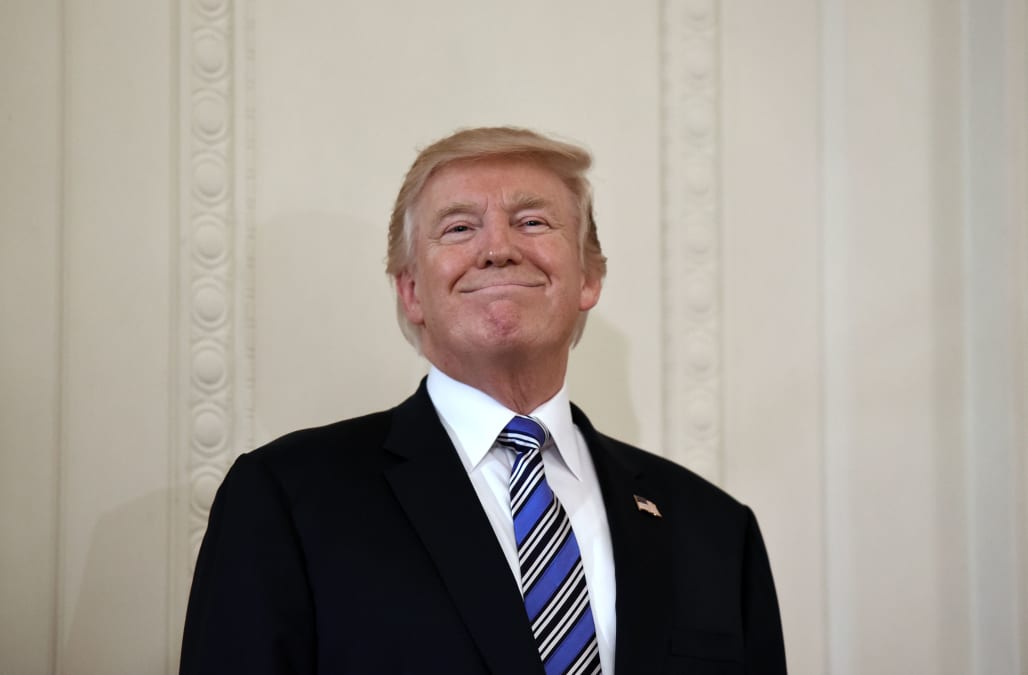 NEW YORK, July 20 (Reuters) - About one in eight people who voted for President Donald Trump said they would not do so again after witnessing Trump's tumultuous first six months in office, according to a Reuters/Ipsos poll of 2016 voters.

While most of the people who voted for Trump on Nov. 8 said they would back him again, the erosion of support within his winning coalition of older, disaffected, mostly white voters poses a potential challenge for the president. Trump, who won the White House with the slimmest of margins, needs every last supporter behind him to push his agenda through a divided Congress and potentially win a second term in 2020.

The poll surveyed voters who had told Reuters/Ipsos on Election Day how they had cast their ballots. While other surveys have measured varying levels of disillusionment among Trump supporters, the Reuters/Ipsos poll shows how many would go as far as changing the way they voted. The survey was carried out first in May and then again in July.

Eighty-eight percent said they would vote for Trump again, a slight improvement over the May figure of 82 percent. Taken together, the polls suggest that Trump's standing with his base has improved slightly over the past few months despite his Republican Party's repeated failures to overhaul the healthcare system and multiple congressional and federal investigations into his campaign's ties to Russia.

To be sure, most presidents lose support among core supporters the longer they are in the White House. According to the Gallup polling service, former President Barack Obama saw his popularity dip among Democrats and minority voters, though it did not come until later in his first term. But Obama, who won the Electoral College with greater margins than Trump, was not as reliant on retaining his core supporters.

The minority of Trump voters who said they would not vote for him again gave varying reasons in interviews for why they had changed their minds.

Some were tired of his daily trolling of Democrats, the media and the judiciary. Some were disappointed that the Trump administration has not yet swept illegal immigrants out of their communities. Others said the president has not ended the mistrust and hyper-partisanship in Washington as much as they had hoped.

"If I had to walk around wearing a T-shirt saying who I voted for, I may have voted differently," said Beverly Guy, 34, a Trump voter who took the poll in July. If the election were held today, Guy said she would vote for Libertarian candidate Gary Johnson.

Guy said she picked Trump mostly because she did not support Democratic candidate Hillary Clinton. She never cared that much for Trump and now finds herself rationalizing a decision that has angered many of her friends.

"I care more about my neighbors than I do about politics," she said.

Another poll respondent, Brian Barnes, said he was standing by his choice to vote for Trump. He thinks the media is focusing too much on the Russia investigation and not enough on Trump's accomplishments like his elevation of another conservative justice to the Supreme Court.

"I think he's doing all he can," Barnes said, "even though the Republicans in the House and Senate are creating a lot of problems" by not passing a healthcare bill.

Experts in American politics said it makes sense that a transformative political figure like Trump would retain a high degree of loyalty from his supporters no matter what negative headlines are swirling around the White House. Political winds do not shift quickly in a strong economy, they said, especially when many of the president's decisions have yet to take root.

"People are still invested in the choices they made" on Election Day, said Larry Sabato, director of the University of Virginia's Center for Politics. "They're not about to admit that they're wrong, at least not yet."

Elaine Kamarck, an expert in American electoral politics at the Brookings Institution, said the erosion in Trump's base could certainly hurt his chances of re-election, though it is too early to say so for sure. The most important question is whether he loses support where it counts - in battleground states that he barely won last year.

"If these disenchanted Trump voters are in California, it doesn't matter," Kamarck said. "If they live in Wisconsin or Michigan or Pennsylvania, it matters."

The Reuters/Ipsos poll was conducted online in English throughout the United States and has a credibility interval, a measure of accuracy, of about 5 percentage points.

More from AOL.com:
The Democrats' biggest donor says the party is blowing it and should get behind Bernie’s platform
Trump voters don't believe Don Jr. met Russian lawyer
Nearly 80 percent of Trump voters say he should stay in office even if Russian collusion is proven