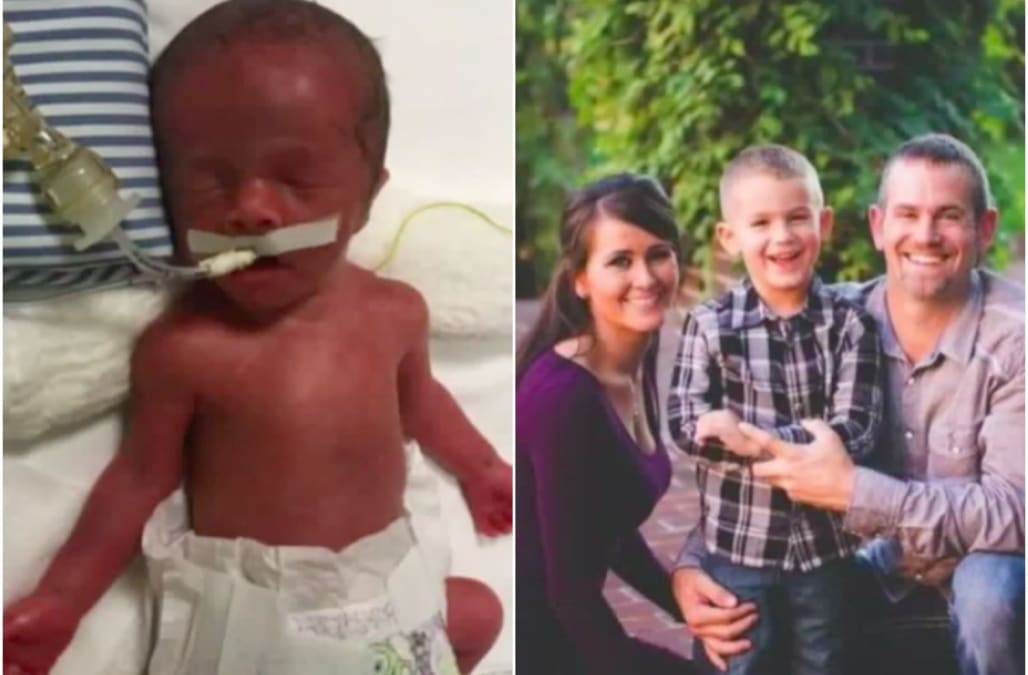 UPDATE: Baby Beckham has been released from the Cancun hospital. His family is on their way to the airport to get on a medical jet and head back to Indiana.

MARTINSVILLE, Ind. (WTTV)– An American baby, born premature in Mexico, is being held hostage by a Cancun hospital, according to the grandparents trying to get him home.

Michaela Smith and Larry Ralph Jr. planned a dream vacation to Mexico. But now the trip has turned into a nightmare.

"Our daughter is stuck in Cancun, with our first grandchild and we can't get him here," said Elaine Smith, Michaela's mother.

Michaela was 28 weeks pregnant when she and Larry left for Mexico. Michaela's parents say she checked with her doctor before moving forward with the plans they'd already made to leave the country. She was told traveling up until 30 weeks would be fine, so she went ahead.

"A baby born at 28 weeks, in the United States, has a 96 to 98 percent chance of survival in that first year," said Larry Ralph Sr., father of Larry Ralph Jr. Junior has been frantically working to get Michaela and his newborn baby out of Mexico.

Shortly after his birth, her parents say the nightmare began.

"Literally they're being held hostage down there," said Larry Sr. "We just want to get him somewhere and get him stable. We need to get him in America."

Michaela and Larry Sr. handed over nine thousand to the hospital for the first day of care and then another four thousand for various "fees." Then they say hospital staff refused to release the baby to an air ambulance until they paid the bill in full.

"Larry went that whole evening without seeing the baby," said Larry's father, Larry Ralph Sr. "They demanded pretty much he pay another $4,000 and that got him access to go back and see the baby."

The total kept changing, but was last pegged at $30,000, just two hours after they were told it would be $27,000. And even that total doesn't include the money the four grandparents spent on the air ambulance.

"The Medivac was paid for to St. Petersburg Hospital, that was around $18,000," said Larry Sr.

But that plan fell apart as well.

The grandparents learned from their first medical flight company that no Florida hospital would take Beckham because of his mother's Hoosier Healthwise insurance.

"I would've never thought that we would've had a problem getting him in a hospital here," Elaine said. "We would've thought Florida would've been our best chance."

SEE ALSO: North Carolina grandmother to be deported after decades in US

They were on the phone with Congressman Trey Hollingsworth's office all day to find a hospital that will take him since it's an emergency. Hollingsworth's office issued a statement saying, "Indiana's 9th Congressional District office has been working with the family throughout the day seeking a solution to get this newborn home, to the United States, for necessary medical care. Representative Hollingsworth continues to assist and looks forward to greeting this new Hoosier as soon as he is home and healthy."

The family also reached out to Senator Donnelly's office on Wednesday. His office got back with them on Thursday told the family they've reached out to the U.S. Embassy in Mexico.

Meanwhile, the cost of Beckham's care in Mexico keeps climbing.

The family said they didn't want to ask for money, but with nearly $30,000 spent out of pocket just on the hospital, they decided to start a GoFundMeto help bring Beckham home.

"I love you Michaela," said Elaine as she spoke to her on the phone. "We're gonna get you and Larry and Beckham out of there. We will do it."

They hope the hospital will release him without incident, but worry they'll continue asking for money they don't have.

Once the medical jet leaves Cancun, it will stop in Pensacola to go through customs, and then it will head to Indianapolis. If all goes well, they should be back in Indianapolis by 6 p.m.

The new jet costs nearly $30,000 to bring Beckham all the way to Indiana, a cost the family has to pay for up front.

More from AOL.com:
Woman accused of abandoning newborn outside grocery store turns herself in
10-year-old boy who died after trip to neighborhood pool had fentanyl in his system
Cops: Woman who reportedly lost baby during gender reveal party shooting wasn't pregnant