NBC News/WSJ poll: Voters in Trump counties like his policies, not his style 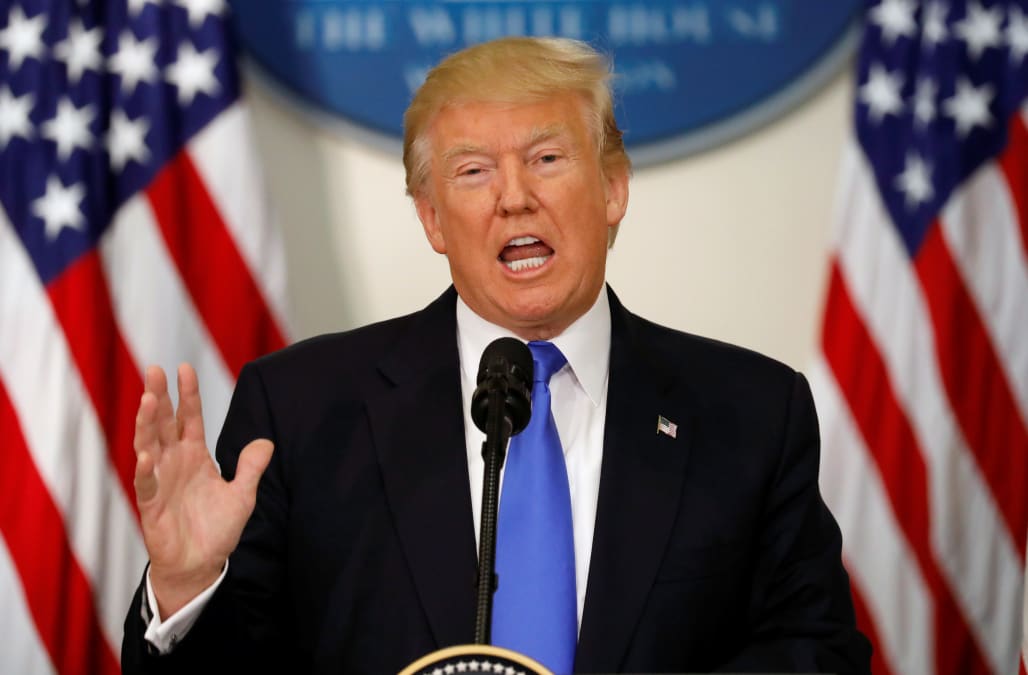 In the places that helped carry President Donald Trump to victory in 2016, there's plenty that Americans like about his pugnacious policy stances on trade and foreign affairs, but they are far less comfortable with his combative personal style.

A new NBC News/ Wall Street Journal poll of 439 key "Trump counties" from the most competitive states finds broad support for Trump's proposals to keep jobs in America as well as his aggressive responses to North Korea's nuclear development and Syria's use of chemical weapons.

But these same Americans give poor marks to Trump for his refusal to release his tax returns, his response to Russian interference in the 2016 election and particularly his shoot-from-the hip use of Twitter.

"Without a doubt, Donald Trump's personal style was part of his appeal in the 2016 campaign. But more and more it appears to be a distraction that is starting to hit a sour note with his base," said Democratic pollster Fred Yang of Hart Research Associates, who conducted the poll along with Republican pollster Bill McInturff of Public Opinion Strategies.

Click through Trump's latest tweets about state of Obamacare:

5 PHOTOS
Trump sounds off on state of Obamacare: 7/18
See Gallery

Trump sounds off on state of Obamacare: 7/18
Republicans should just REPEAL failing ObamaCare now & work on a new Healthcare Plan that will start from a clean slate. Dems will join in!
We were let down by all of the Democrats and a few Republicans. Most Republicans were loyal, terrific & worked really hard. We will return!
As I have always said, let ObamaCare fail and then come together and do a great healthcare plan. Stay tuned!
With only a very small majority, the Republicans in the House & Senate need more victories next year since Dems totally obstruct, no votes!
The Senate must go to a 51 vote majority instead of current 60 votes. Even parts of full Repeal need 60. 8 Dems control Senate. Crazy!
Up Next

Fully three-quarters (75 percent) of those polled said they support Trump's pledge to bargain with global companies to keep jobs in America, while two-thirds backed his willingness to take action against North Korean nuclear development (68 percent) and his use of military force to respond to Syria's use of chemical weapons (66 percent). What's more, that support comes not just from members of Trump's own party. Majorities of independents and roughly half of Democrats approve of Trump's moves on trade, Syria and North Korea.

Fifty-three percent of respondents also say they back the Trump administration's implementation of a travel ban for citizens of six majority-Muslim countries, compared with 38 percent who oppose the policy.

And Trump's decision to pull the United States out of the Paris climate accords is also a mixed bag, with 32 percent of "Trump county" voters agreeing with the move while 48 percent oppose it.

... but disapproval for Trump's personal style

Despite their enthusiasm for many of Trump's trade and foreign policy plans, those surveyed are not fans of his combative personal style, particularly when it comes to the controversies that have embroiled his presidency.

Asked how Trump has fallen short of their expectations, a plurality — 29 percent — said that he makes personal attacks that set a bad example for the country.

Trump's much-discussed Twitter habit is particularly off-putting, according to the poll. More than six-in-ten (62 percent) dislike his use of Twitter, compared to just 24 percent who support it. Even his own voters are split on his 140-character habit, with 43 percent approving of his use of Twitter and 38 percent opposing it.

Just a quarter (25 percent) support Trump's refusal to release his personal tax returns, while a slim majority (53 percent) opposes it.

A third (33 percent) support his firing of former FBI Director James Comey, while 42 percent oppose it.

And only 20 percent agree with how Trump is dealing with Russia's interference in the 2016 election, while 51 percent do not.

As they square their views of a president with policies they mostly like but a temperament that often rubs them the wrong way, this group of Americans is also largely reserving judgment about whether or not Trump will ultimately be a successful president. Twenty-seven percent believe he will be successful, thirty percent say he will be unsuccessful, and forty-three percent say they're not ready to predict either way.

People in these "Trump counties" are fairly united in criticism of the media's coverage of Trump's administration. Sixty percent agree with the statement that "the news media and other elites are exaggerating the problems with the Trump administration because they are uncomfortable and threatened with the kind of change that Trump represents," while only 37 percent disagree. The same share — 37 percent — says that media coverage of Trump has been mostly fair, while 52 percent say it has been too critical.

But, while they may be sympathetic to Trump's grievances about harsh coverage, the poll also indicates that they are not necessarily comfortable with his rhetoric about the press. Forty-nine percent say they oppose Trump's labeling of unfavorable coverage as "fake news," while 38 percent support it.

The distrust these voters have toward elites in the media and elsewhere also reflects a larger feeling that they have gotten a raw deal. Fifty-five percent of those in "Trump counties" say that the political and economic systems in the country are stacked against them, compared with 43 percent who agreed with the same sentiment in a nationwide NBC/WSJ poll five months ago.

Trump's explicit appeal during the campaign to these disaffected voters certainly paid off; he won the "flip" counties by a margin of 51 percent to former Democratic candidate Hillary Clinton's 43 percent and won the "surge" counties 65 percent to 29 percent.

Clinton, on the other hand, is particularly disliked. Just 27 percent give her a thumbs up, compared to 54 percent who view her negatively.