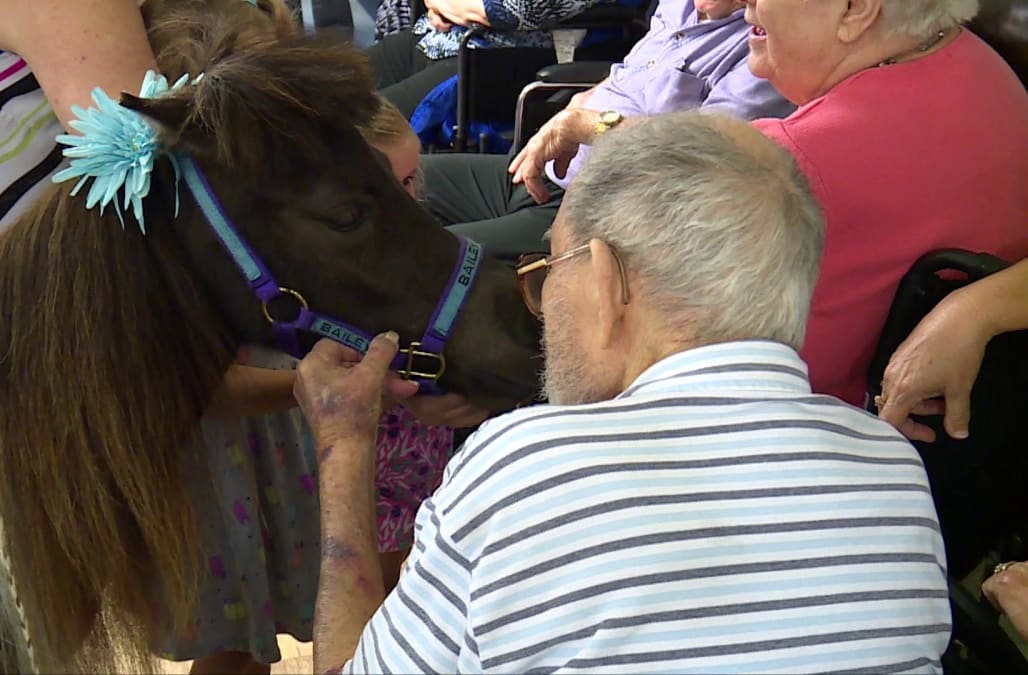 TAYLORVILLE, Ill.(KTVI) – Winnie, Bailey, and Jasper are three American miniature horses from Heartland Mini Hoofs with a big job. They provide animal therapy that can significantly reduce pain, anxiety, depression, and fatigue in people with a range of health problems.

One man was recovering from a stroke at Aspen Care in Troy, Illinois, and the staff said he didn't speak, but when the horses got there, he lit up and spoke up. Al McAtee, director at Aspen Care, said that's the most reaction they had seem from him in the time he had been at the facility.

Mini-horse therapy animals
Up Next

To be a grade-A miniature horse, the animal has to be 34 inches from the ground to their withers, which makes them absolutely perfect for this type of work, because they're right at eye-level with people in wheel chairs or hospital beds.

"I'm a registered nurse, a licensed social worker, and was getting ready to retire and knew I needed something to do," said Andra Ebert, the chief operating officer of Heartland Mini Hoofs. "I have a master's degree in gerontology so aging has always been my specialty."

After a lot of research and visiting some minis, Ebert purchased her three prized ponies and developed a program that starts with desensitizing them to all they'll encounter on their visits and ends with a program that improves the mental, physical, social, and emotional well-being of people they meet.

"We went into a facility in Champaign and was talking to the director and found out there was a gentleman that hadn't been out of his room in four years, four years in the same room, he came out to meet these guys, I spent about 20 minutes with him and found out that he still owns, out in the west, palomino horses, and one is a decedent of Roy Rogers' horse. That opened a door for staff members to interact with him," said Ebert.

Winnie, Bailey, and Jasper, trot their way into more than just nursing homes and hospitals, they also are part of an anti-bullying program for elementary and middle school students and Winnie even has her own book! That's pretty great, but the best part, according to Ebert, "Just the smile it brings to people's hearts."

They go on about 140 visits per year and have traveled over 11,000 miles. They are located in Taylorville, Illinois.

If you want to help the Heartland Mini Hoof, you can make a donation on their GoFundMe page.

More from AOL.com:
Native clams return to Sicilian lake after 30-year absence
Divers save elephant who was swept up by the sea
Baby squirrels are less likely to die if they’re born early