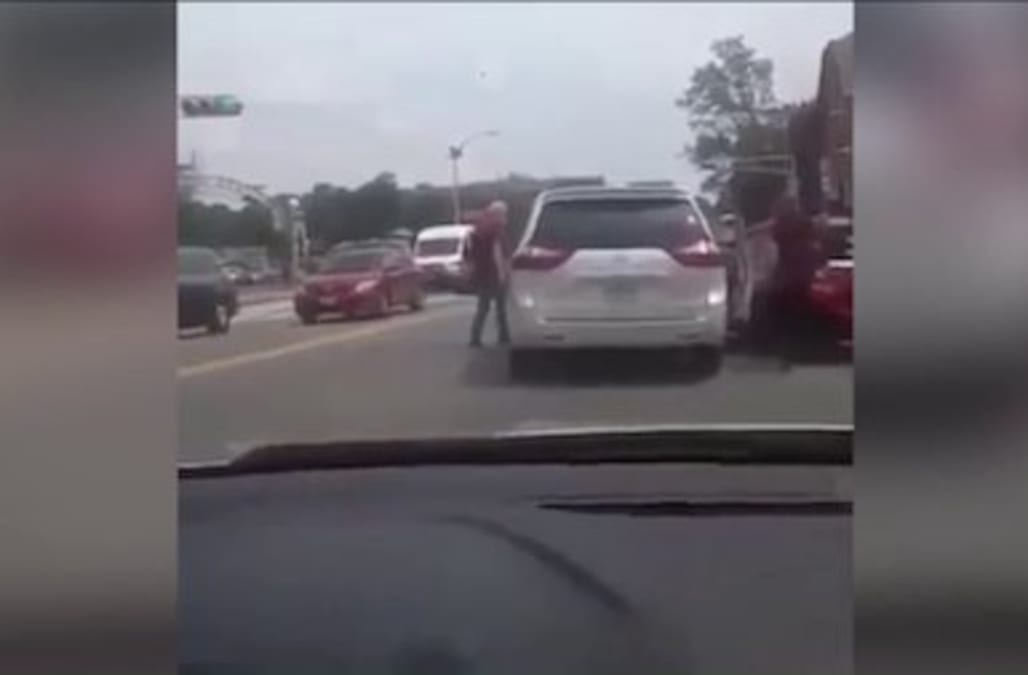 ***Warning: Video of the incident does not auto-play due to graphic content. Viewer discretion is advised.***

MONTCLAIR, NJ (WPIX) — Daphne, a 12-year old pooch, was flung out of a minivan in Montclair after an apparent road rage incident, according to police.

Then, tempers boil over, fists start to fly and out of nowhere, one of the drivers reaches into the passenger side of the other driver's white minivan, pulls out the little black pooch and flings her on the side of the street with no regard for her life.

Daphne can be seen running back to the vehicle.

"The sad part is, he tried to hurt me by throwing my dog, that's cowardly," said Gary Keay, Daphne's owner.

The incident happened Wednesday and the video has since gone viral.

"He got out of his car, jumped on the roof of my car and started stomping on my roof...then from that, I got out of the car to take him on," said Keay.

According to Keay, Daphne has some soft tissue injury, but is expected to make a full recovery.

Investigators have identified the driver who tossed Daphne out of the minivan as Marc Dionne.

Different jobs dogs can have
US Capitol Police use a bomb sniffing dog at a parking lot as they respond to reports of a shooting at the US Capitol in Washington, DC, April 11, 2015. (Photo credit should read SAUL LOEB/AFP/Getty Images)
South Korean high school girls wearing masks are being guided by seeing-eye guide dogs on their school grounds in Seoul on April 15, 2008. (Photo credit should read KIM JAE-HWAN/AFP/Getty Images)
A dalmatian sits in the cab of a fire truck in New York City. (Photo by Dario Cantatore/Getty Images)
Aliy Zirkle drives her dog team across the portage from Kaltag to Unalakleet during the 2014 Iditarod Trail Sled Dog Race on Saturday, March 8, 2014. (Bob Hallinen/Anchorage Daily News/MCT via Getty Images)
Mountain rescue exercise in the Haute-Savoie department (Upper Savoy) by the 'GMSP' team ('Groupe Montagne des Sapeurs-Pompiers', fire department in mountain areas), avalanche rescue exercise. (Photo by: Andia/UIG via Getty Images)
A Border Collie named Jill, owned by Bobby Crafts, herds sheep on January 22, 2017 in Denver, Colorado. (Photo by Helen H. Richardson/The Denver Post via Getty Images)
Handler Meagan Phelps works with Dandy in the dog's personal office at the police station. Toronto Police Victim's Services is now employing the first ever Toronto police therapy dog, Dandy is specially trained to comfort traumatized people during interviews with police. (Bernard Weil/Toronto Star via Getty Images)
Up Next