This ancient one-ton crocodile had steak knives for teeth 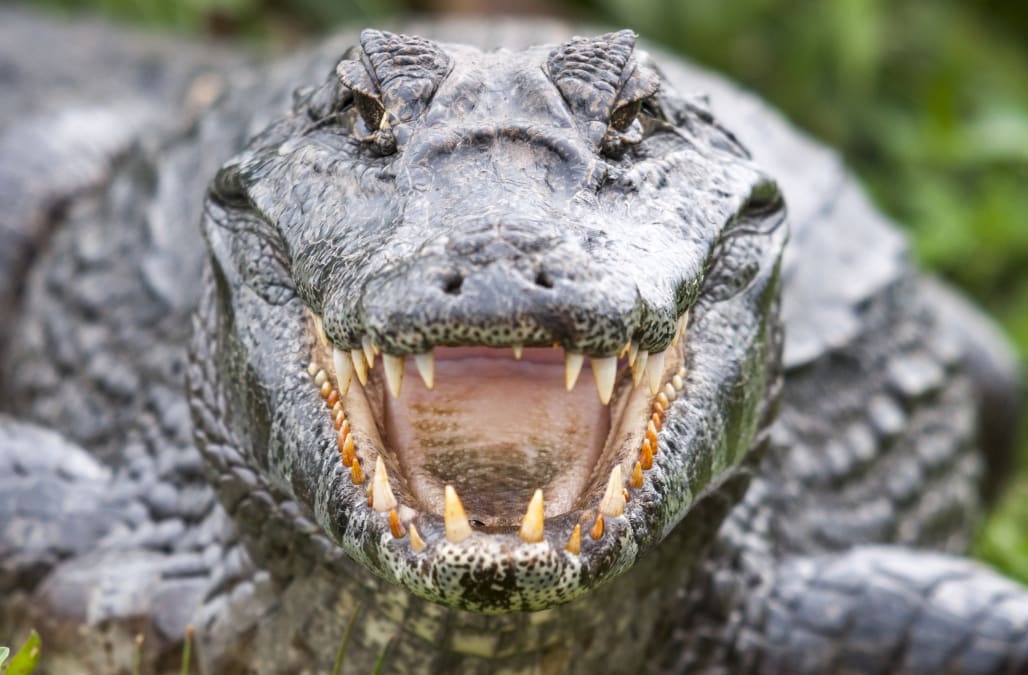 Move over Tyrannosaurus rex: There's a new prehistoric carnivore in town. Meet the Razanandrongobe sakalavae, an ancient crocodile from Madagascar measuring as much as 20 feet long by 5 feet wide. Razana's name comes from the native Malagasy for "giant lizard ancestor from Sakalava." This croc had steak knives for teeth, and was the first of its subfamily to live mostly on land.

But best yet, its size caught paleontologists by surprise.

"Absolutely! I did not expect to find such a 'giant' in the Middle Jurassic," exclaims study author Cristiano Dal Sasso. "We began with a couple of isolated teeth and ended up bringing back to life a one-ton, terrifying, bone crusher."

The scientists first found fragments of the animal's skull in the early 2000s. However, they could only narrow down Razana's identity after finding additional fragments hidden in another fossil collection. The paleontologists then made 3D prints of the pieces they had and pieced together the parts. Based on that skull, the researchers realized this fossil could be the oldest discovered ancestor of a crocodylomorph branch called the notosuchia. They published their results earlier this month in the journal PeerJ.

Razana ruled Madagascar around 165 million years ago, back when the island was breaking off from Africa. The massive animal had serrated teeth, perfect for cutting into flesh. In fact, the serrations on the Razana's teeth are larger and more densely packed than on a T. rex's. The Razana likely preferred eating sauropods—tall, long-necked, big-bodied herbivores. But the croc wasn't the only meat-eater on the island. It co-existed with fellow carnivores from the dinosaur theropod family, bipedal animals with small arms and long tails for balancing. (The T. rex is a member of this family, but the Razana came before by approximately 100 million years.) For the most part, Razana didn't have many rivals on Madagascar, says Dal Sasso.

Razana's discovery fills in a 80 million year knowledge gap for the notosuchia. This major family branch once represented nearly half of all known crocodyliforms.

"Interestingly, notosuchians have long been known to have a very long ghost lineage," says paleontologist Joseph Sertich, a curator at the Denver Museum of Nature and Science who has also studied ancient Madagascan notosuchia.

Researchers have found many crocodiles in the fossil record from the Cretaceous Period and onwards. In fact, Sertich points out that crocodile relatives were some of the "most diverse, unusual, and frightening animals during the age of dinosaurs"—an fact underrepresented in the public imagination.

But in order to have such diversity, the branch likely had to split from the main crocodyliform lineage many millions of years before. This probably happened during the Triassic or Jurassic Periods.

Most notosuchians are about as big a medium-sized dog, says Sertich. Therefore, going so far back in time, "I would have anticipated a small, rather generalized notosuchian," and not this huge, hyper-carnivorous animal. "That alone hints at a huge amount of undiscovered diversity in crocodyliforms still waiting to be found."

Additionally, Dal Sasso notes that crocs before Razana's time were mostly marine aquatic. "That is why Razana is important," he says. Razana could probably swim, he says, but it was mostly a land-dwelling animal. Most notosuchians after Razana were fully terrestrial and walked on four erect limbs. Razana's discovery might help narrow down when that change occurred.

In the meantime, just remember that "this is possibly an upright running carnivore the size of a living nile crocodile," says Sertich. "Pretty scary!"