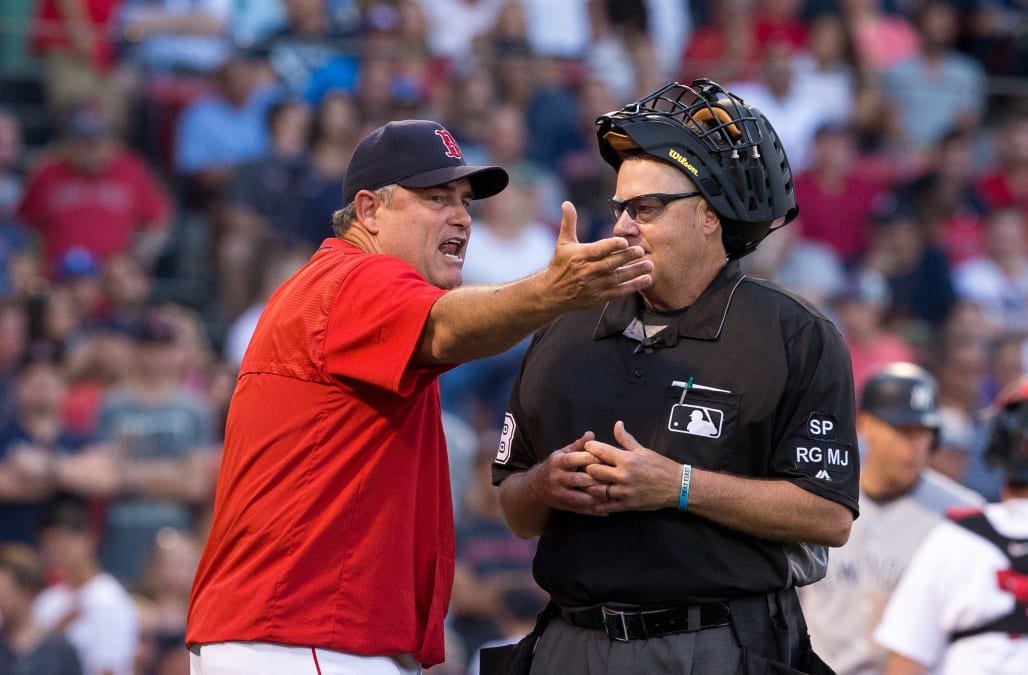 The New York Yankees and Boston Red Sox have had some dramatic disagreements over the years, but Saturday's game at Fenway Park featured one of the strangest wrinkles in their rivalry to date.

With the game tied 1-1 in the 11th inning, Yankees designated hitter Matt Holliday made a bold move. After being called out on a force play at second, the 37-year-old veteran charged back to first base in an effort to break up the potential double play. Holliday slid hard, and Red Sox first baseman Mitch Moreland watched the ball zip by his glove and hit base runner Jacoby Ellsbury, causing him to be called safe.

Check out the bizarre scene.

The Yankees quickly made their final two outs of the frame to strand Ellsbury at first, eventually winning the game 4-1 after 16 innings. But while Holliday's surprising gambit had no direct effect on the outcome, the Red Sox still filed the game under protest.

"I still firmly believe there was interference on the play," Red Sox manager John Farrell said on Sunday. "If it goes unaddressed or goes without any kind of further attention brought to it, who's to say you can't instruct runners to do the same going forward?"

Farrell asked the umpires to review the play, but after contacting the Replay Operations Center in New York for what was termed a "rules check," it was determined that no interference had occurred. Farrell then informed officials that the game would be put under protest.

"If there was no interference, [Moreland] would've had access to the bag," Farrell said. "He was taken out of it by the returning runner."

Key moments in the Red Sox-Yankees rivalry
BOSTON - JULY 24: Alex Rodriguez of the Yankees and Red Sox catcher Jason Varitek trade blows in the 3rd inning that precipitated a bench clearing brawl between the two teams. Both players were ejected from the game. (Photo by Barry Chin/The Boston Globe via Getty Images)
Babe Ruth wearing the uniform of the Boston Red Sox, the team he played with from 1915 until he joined the Yankees in 1920. (Photo via Getty Images)
NEW YORK CITY - OCTOBER 19: Alex Rodriguez of the New York Yankees heads into first base as Boston Red Sox pitcher Bronson Arroyo tries to tag him, during the eighth inning of the American League Championship Series at Yankee Stadium. Umpires ruled that Rodriguez was out because he batted the ball away from Arroyo. Doug Mienkiewicz of the Sox is at right. (Photo by Barry Chin/The Boston Globe via Getty Images)
BOSTON - OCTOBER 16: As the fans go wild, Aaron Boone heads for home as Tim Wakefield heads for the off season in the background. (Photo by Jim Davis/The Boston Globe via Getty Images)
UNITED STATES - OCTOBER 11: Boston Red Sox' pitcher Pedro Martinez (left) throws 72-year-old New York Yankees' bench coach Don Zimmer to the ground in a fourth-inning fracas at Fenway Park during Game 3 of the American League Championship Series. Martinez had hit the Yankees' Karim Garcia with a pitch at the top of the inning; when Yanks' pitcher Roger Clemens then nearly grazed the Sox' Manny Ramirez, a bench-clearing brawl ensued. Zimmer, who lunged at Martinez during the dustup, was taken to the hospital for observation, then released. The Yanks won, 4-3. (Photo by Linda Cataffo/NY Daily News Archive via Getty Images)
(Original Caption) Boston: Boxing Or Wrestling? Yankee's Gene Michael (L) and Bosox catcher Carlton Fisk (top), battle on the mound as Yanks' Thurman Munson, (LL), is held down by (L to R), Boston's Doug Griffin, Carl Yastrzemski, and John Curtis during 9th inning melee at Fenway Park. Munson and Fisk were both thrown out of the game which Boston won 3-2.
UNITED STATES - OCTOBER 21: It's bedlam - but a happy kind - as Boston Red Sox players explode with joy after their 10-3 victory over the New York Yankees in Game 7 of the American League Championship Series at Yankee Stadium. In an astounding comeback, the Bosox became the first team in baseball history to win a best-of-seven series after losing the first three games. Now, they go on to the World Series. (Photo by Corey Sipkin/NY Daily News Archive via Getty Images)
Apr 11, 2018; Boston, MA, USA; New York Yankees first baseman Tyler Austin (26) starts a scrum with Boston Red Sox relief pitcher Joe Kelly (56) during the seventh inning at Fenway Park. Mandatory Credit: Winslow Townson-USA TODAY Sports
Up Next

Holliday claimed he didn't realize he had been called out at second.

"I assumed that he was going to tag [first] base and throw to second for the tag," he said. "I wasn't going to run into a tag. As soon as he hit the ball, I'm thinking, Ellsbury's running, he's going to touch the base and try to get the tag at second."

MLB will now decide whether or not to heed the Red Sox's protest and replay the game, though any action is unlikely. The league does not typically uphold protests based on calls that weren't relevant to the outcome of a game.