Eric Garner’s daughter to police violence victims: 'In 3 years they won’t give AF' 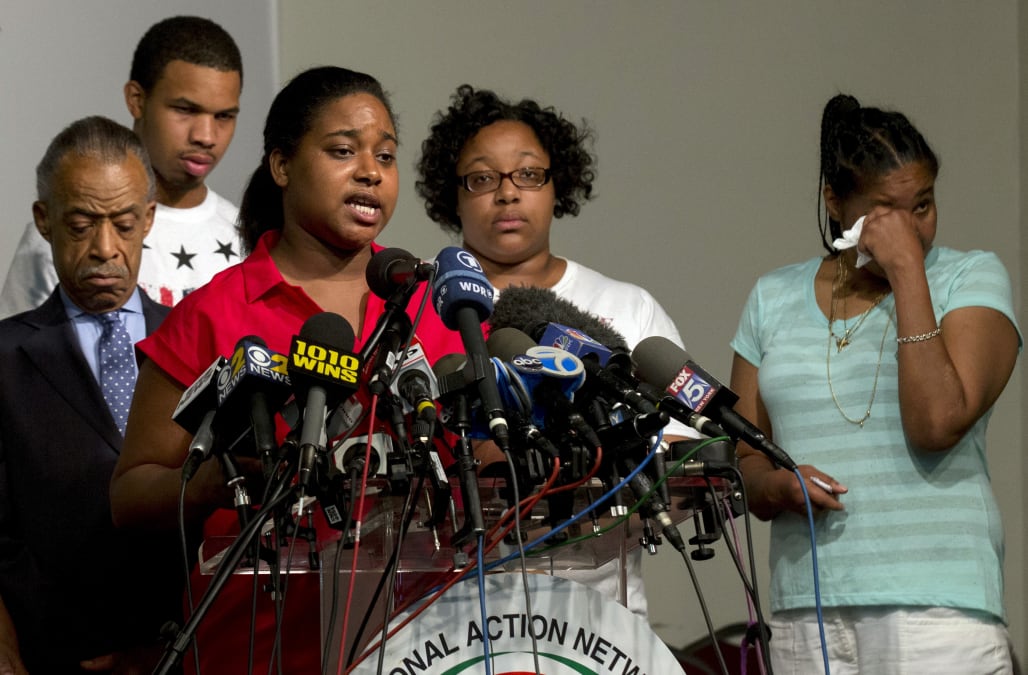 In December 2014, after a grand jury declined to bring charges against Pantaleo, the Department of Justice opened an investigation into the case. Nearly three years since then, his family is still seeking justice.

On Monday, Garner's daughter, Erica, tweeted about the years-long journey since her father died.

Garner has vowed to turn her back on New York City Mayor Bill de Blasio, who reportedly recalled the day as "painful" while speaking at an event in Queens, New York, according to Politico reporter Gloria Pazmino. NYPD commissioner James P. O'Neill said the department has come "a long way" in police-community relations since Garner's death.

Since her father's death, Erica Garner has continued to speak out against police brutality. She has written op-eds for the Washington Post, led protests and tweeted about her dissatisfaction with the investigation.

The DOJ literally gathered my family in once place... After we have been waiting for answers for 3 years to say they cant answer SHIT!

In June, the Garner family, their lawyer and Rev. Al Sharpton met with the Department of Justice to discuss the progress in the case, yet received a message that the case was still ongoing. The DOJ didn't have any further information or details about the case to share with the family or the press. At a press conference following the meeting, Erica remained mostly silent, saying only that she would express her opinions later either through Twitter or her website.

Jonathon Moore, a civil rights lawyer representing the family and estate of Eric Garner, spoke about the family's frustrations with the case.

"We are very frustrated about the pace [of the case]," he said. "It's pretty clear to us from the video and from the autopsy report and the officers' report that all the officers out there on that day are guilty of serious misconduct."

Sharpton said the family is both uneasy and unsure about how long the investigation is taking. More specifically, he says that this case carries specific importance.

"The nation is watching this case," he said. "If there will be no charges, it will be a global notification about the state of police-community affairs."

Attorneys General Eric Holder and Loretta Lynch oversaw the case at the DOJ but left office before any decisions were made. Specifically, it was delayed because federal prosecutors and FBI officials in New York opposed charges in spite of prosecutors in the civil rights division of the DOJ in Washington seeing reason to proceed.

With Attorney General Jeff Sessions as head of the DOJ, activists have doubts that police accountability will be a part of his agenda. While Lynch placed police reform at the center of her politics, Sessions is known to be skeptical of police reform.

According to Gwen Carr, Eric Garner's mother, the family is just "playing the waiting game" now, she said at the press conference in June. But Carr had a simple response when asked about how the case will fare under the new administration: the family's mission will not change.

"Doesn't matter who the president is," she said. "We're still looking for justice."