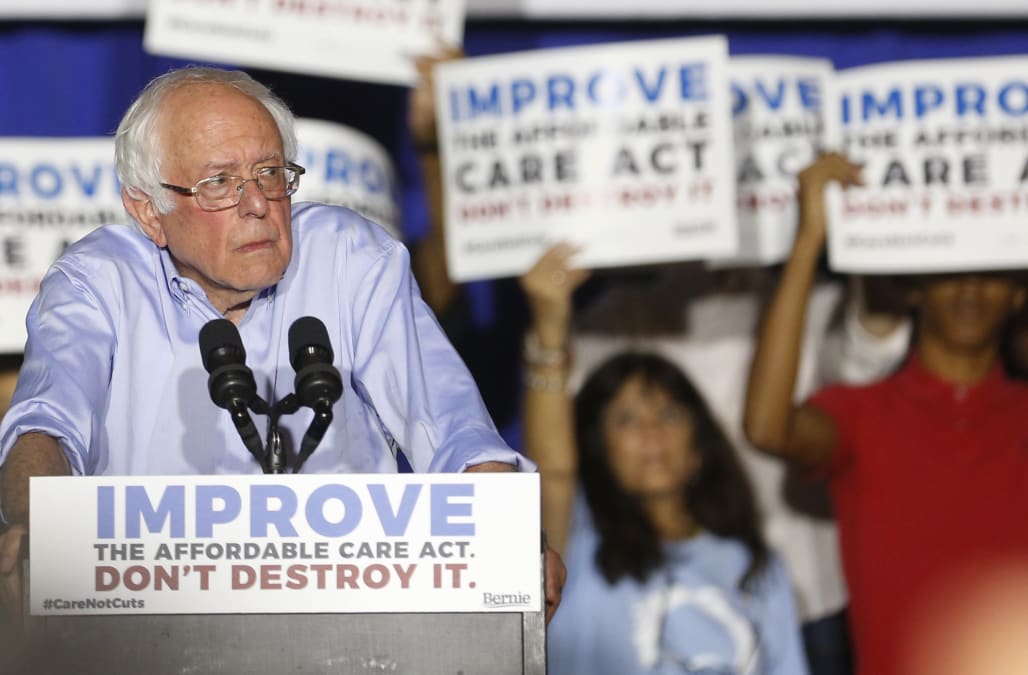 "When people say Bernie is crazy, no. Bernie is talking about inequality. That is the burning issue in the United States."

That is a message that progressives, and particularly Bernie Sanders supporters, have been trying to drive home with the leadership of the Democratic party since Hillary Clinton's brutal loss in the 2016 presidential race — often, some have felt, to little avail. But it's no longer a message coming from outside the establishment: it's now the opinion of Tom Steyer, the largest donor to the Democratic party.

Mic recently caught up with Steyer, a California hedge fund billionaire who spent a whopping $87 million on Democratic candidates and causes in 2016 and endorsed Clinton after the primaries, to discuss the state of play for Democrats in the Trump era — the good, bad and yes, the ugly. Today, Steyer is an unabashed supporter of Sanders' progressive vision.

"There is an absolute, unspoken war between corporate interests and the American people," he said. "That's the underlying subtext for all of the public discussions within the Democratic party."

"We're seeing a deliberate attempt to take away [working families'] future by really rich people. Until we address that, I don't think we're dealing with the reality Americans are facing today," he continued.

But Democrats, Steyer said, have yet to develop a compelling and positive message to channel the energy Sanders generated on the campaign and help the party win back working class voters in the Rust Belt who flipped for Trump — let alone turn their own base out at the polls on Election Day.

For Steyer, that message must start with inequality, not jobs. "Before you freak out on the jobs question, which everyone loves to do, understand that we [only] have 4.3% unemployment," Steyer said.

"But what we do have is a whole bunch of people who have jobs they can't live on," he added, a reference to the thinking behind the Fight for $15 and other progressive campaigns to raise working class wages.

To that end, Steyer, who chairs the Fair Shake Commission on Inequality in California, just released a new report in partnership with the Center for American Progress proposing a host of progressive policies to address inequality, including increased infrastructure spending, investments in clean energy and higher pay for contract workers.

"Democrats have to move from resistance to offense," he said. "Being not-Trump is not nearly enough. We have to put forward our positive vision for the future. If we can't do that, then I don't understand the point."

That probably explains, in part, Steyers' interest in Sanders's policy vision — as does Steyer's advocacy with NextGen Climate, which has long focused on grassroots organizing and engaging young people on college campuses.

But Steyer's support for Sanders goes beyond their shared interest in mobilizing millennials to turn out at the polls. Steyer is also throwing his weight behind some of the once-fringe issues that Sanders championed on the campaign trail, such as single-payer health care.

"One of the things people get mad at Bernie about is single-payer," Steyer said. "You know who is also calling for that? Warren Buffett. We have got to start looking at things with a fresh eye."

"The idea that we're not going to cover people is over," Steyer explained. "Health care is a right. The question is how do we deliver it in the most efficient manner possible."

Steyer admitted that getting to a single-payer system in the U.S. would be "really difficult," but he believes that other countries' systems are hurting American competitiveness. "Single-payer is a system [elsewhere] that is kicking our ass," he said.

When the Democrats' biggest donor calls single-payer the gold standard for the country, that is a clear indicator of Sanders' long-term impact — and of the ever-widening gulf between the party's progressive and centrist camps.

Steyer, who said he considers himself a Democrat but "not part of the party apparatus in any shape or form," was the largest individual funder of the 2016 election. The results were obviously quite disappointing. Of the seven candidates for national office that Steyer supported through NextGen's Action Committee, four lost — including, of course, Clinton.

Coming off those bruising defeats, Steyer has only redoubled his efforts. He recently announced on Mic the launch of NextGen Rising, a new voter registration campaign to mobilize young voters in eight key states ahead of the 2018 midterm elections.

But while Steyer remains hopeful for the future, he says that Democrats must start recruiting politicians who can actually win.

"One of the absolute necessities for Democrats in 2018 is going to be to recruit credible and good candidates that line up well with their districts," Steyer said.

In the aftermath of the election, progressive activists have launched a host of candidate-recruitment startups, including Run for Something and The Arena. But those initiatives will take time to get up and running, and with only 16 months until the 2018 midterms, Democrats have zero time to spare.

Beyond 2018, there's also the race for the presidency in 2020. When asked what he thought about one rising Democratic star whose name is often tossed around in conversations about 2020 — California Sen. Kamala Harris — Steyer dismissed the question outright, "This is so much too early to be talking about 2020."

Still, aside from Sanders, it's not immediately obvious who would be the best candidate to advance the economic message Steyer is championing, between the dozen or so names that are frequently mentioned as 2020 contenders — from Cory Booker and Elizabeth Warren, to outsiders like Howard Schultz. But one thing is clear: Steyer has his eyes on 2018 and 2020, and he's in favor of the party adopting a solidly progressive agenda, rather than just running on an anti-Trump platform or trying to fight for the center.