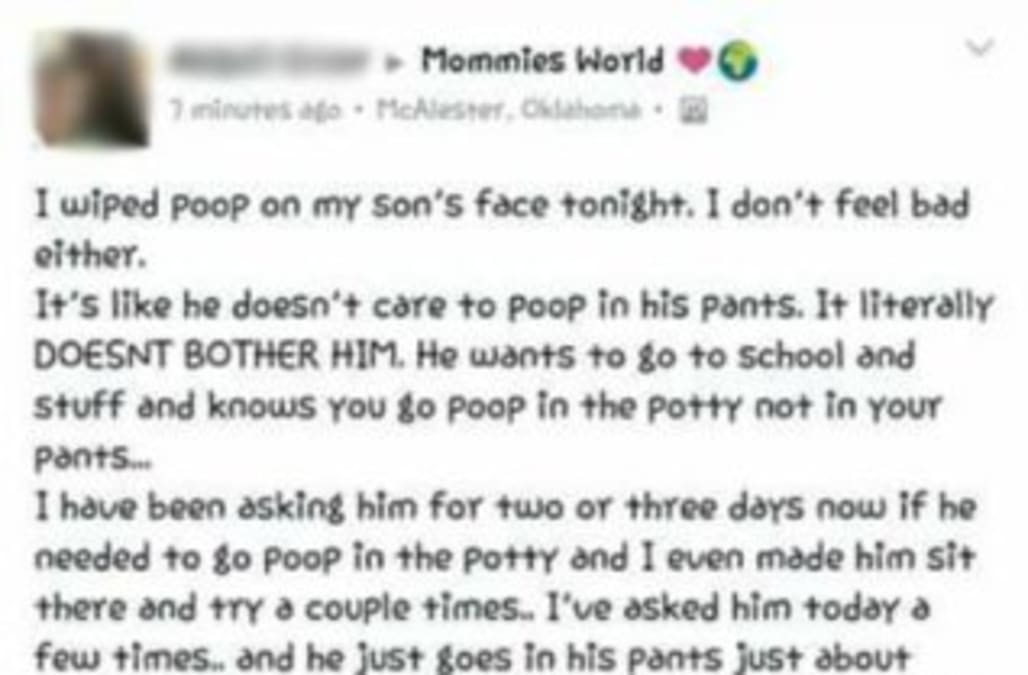 OKLAHOMA (KFOR) - When Lexi Myers saw the words posted on Facebook, she had to re-read them over and over.

"I kept looking at it and I was like 'this has got to be a joke,'" she told NewsChannel 4. "I got sick to my stomach to think someone could actually do this to their child."

Myers had come across a post from a McAlester woman, frustrated at the inability to potty train her four-year-old son, and determined to discipline him.

"I wiped poop on my son's face tonight," the post reads. "I don't feel bad either."

As the post continues, the woman -- who has since deactivated her Facebook -- details her struggles with training the boy, saying she's "exhausted and the stress from that and a one-month-old is driving me crazy." 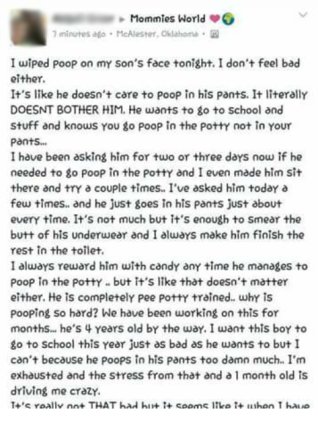 "I was just thinking, 'those poor children,'" Myers said. "I'm not one to say let's go grab the pitchforks and shame her to no other because we all make mistakes. But we have to learn from those mistakes and own up to them."

Myers called the Department of Human Safety Abuse Hotline after reading the post. Other parents on Facebook claimed they would do the same.

DHS tells NewsChannel 4 it has received numerous complaints from people who have seen the post. By law, it can neither confirm nor deny if it is investigating the mother.

That information doesn't always signal abuse however, and whether the McAlester mom's conduct crosses the line is unclear.

Under state law, "abuse" is defined as "harm or threatened harm to a child's health, safety or welfare."

In order to be considered abuse, the person responsible for the child must demonstrate a pattern of abuse.

"There are differences between making mistakes and intentionally abusing or neglecting a child," Powell said. "So those are all the things we have to take a look at. What kind of effect and harm does it have on a child? Is it repeated? Is it intentional? Is it beyond just moral discipline?"

Parenting may be a challenge in itself, but educators at Parent Promise in Oklahoma City say potty training is among the most "popular" topics.

"We have parents that have newborns and already they're telling us, 'yes, please, we're ready to learn about potty training,'" said Natalia Fernandez. "We wish there was a magic spell or magic wand we could use, but that's not the case."

The most basic thing to realize, Fernandez said, is that all children develop differently. Potty training should be tied to a child's development level, not his or her age.

Educators at Parent Promise didn't want to comment on the specifics of the Facebook post, but say in general, punishing a child for struggling with potty training will not bring successful outcomes.

"Punishing them and disciplining them harshly is just going to make the experience be stressful for them, stressful for the parent, so we definitely don't encourage that," Fernandez said. "It's really important for parents not to get frustrated and punish the child for having accidents and things like that. It's part of the process."

It's also important to realize parents have community resources all around them, Fernandez said, willing to help them if they have questions.