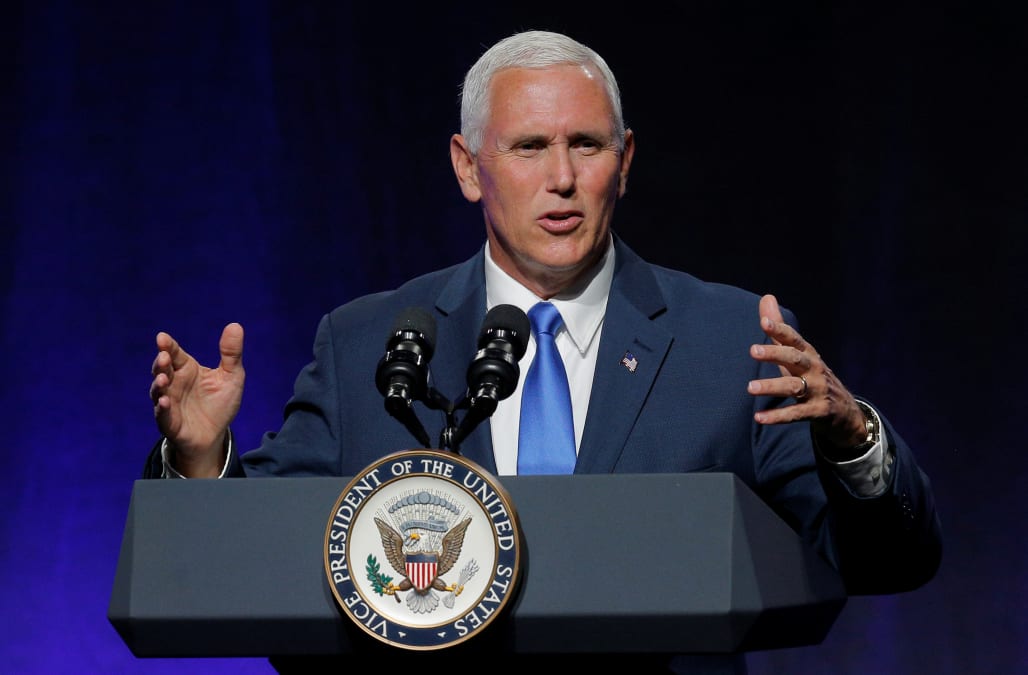 He stressed how Sen. Mitch McConnell's proposed legislation would allow governors to develop their own unique plans to address health care in their states.

Pence used his experience as former governor of Indiana to relate to his audience, saying he found it difficult to address the needs of Indiana during his time in that office due to barriers from the federal government.

"I know how important health care is to each and every one of you," Pence said. "And Obamacare is imploding across the nation." He added that he and Trump "look forward to the Senate taking on this bill as early as next week."

Under the latest version of the Senate bill, unveiled Thursday, states would have the option of a per capita cap or a block grant. In both cases, Medicaid would be converted to a fixed payment.

Senate Republicans remain divided on the bill, which would also allow insurers to offer health plans that don't follow Obamacare standards, as long as they also provide plans that follow those guidelines. The plan would also allow health savings accounts to cover insurance premiums for the first time. At least two senators have said they oppose the bill, meaning that if another joins them, bill would not have the votes to pass. Democrats are expected to vote no en masse.

"The truth is, these reforms are long overdue," Pence said, asking the governors for their support.

Yet, some governors in the audience had met earlier in the day to express their frustrations with the bill and called on fellow governors and those running for their positions to do the same.

RELATED: A look inside the meeting

"Either you want to want to destroy Medicaid and other health programs so you can give a giant tax reduction to the wealthiest .2 percent of our population, or you care about health care and the citizens of your state," Connecticut Gov. Dannel Malloy, a Democrat, told the press during the meeting.

He added that this health legislation "isn't about politics, it's about saving lives," and that lawmakers need to start from scratch to develop a better bipartisan solution.

Malloy and others said prospective Republican governors, most of whom are remaining silent on the issue, are placing their political agendas ahead of the needs of citizens in their states.

They are worried taking a stance would be a "kiss of death," he said.

He praised Nevada Gov. Brian Sandoval's outspoken opposition to the bill, despite his Republican affiliation.

Malloy and other governors, including North Carolina Gov. Roy Cooper, Louisiana Gov. John Bel Edwards and Rhode Island Gov. Gina Raimondo, expressed how effective Medicaid expansion has been in their states and how their budgets are not equipped for the Senate's proposed legislation.

"Can I forsee $3 billion in revenue growth to cover the bill? The answer is no," Malloy said.

Without Medicaid expansion under the Affordable Care Act , the governors warned many people will lose health insurance.

A loss of the Affordable Care Act would also result in the loss of many jobs within the health industry, Democrat Raimondo said, adding that the hospital system is Rhode Island's largest employer.

Cooper, another Democrat, said the proposed legislation would make it impossible for officials to combat the opioid epidemic, which has also been a major topic of discussion at the summer meeting.

In his speech, Pence touted the bill's $45 billion set aside to help combat the crisis.

But Cooper called this money a "fig leaf" and said many of the "flimsy" health care policies under the new legislation would not include substance abuse treatment.

Raimondo, who is hosting the summer meeting, said she plans to hold a private meeting with Pence to express her concerns.

More from US News:
The Senate's Obamacare Repeal Effort Has a Fatal Flaw
Why Governors Aren't Getting Behind the GOP Senate Health Care Bill
Health Care Will Bankrupt the Nation, We Need Reform Now