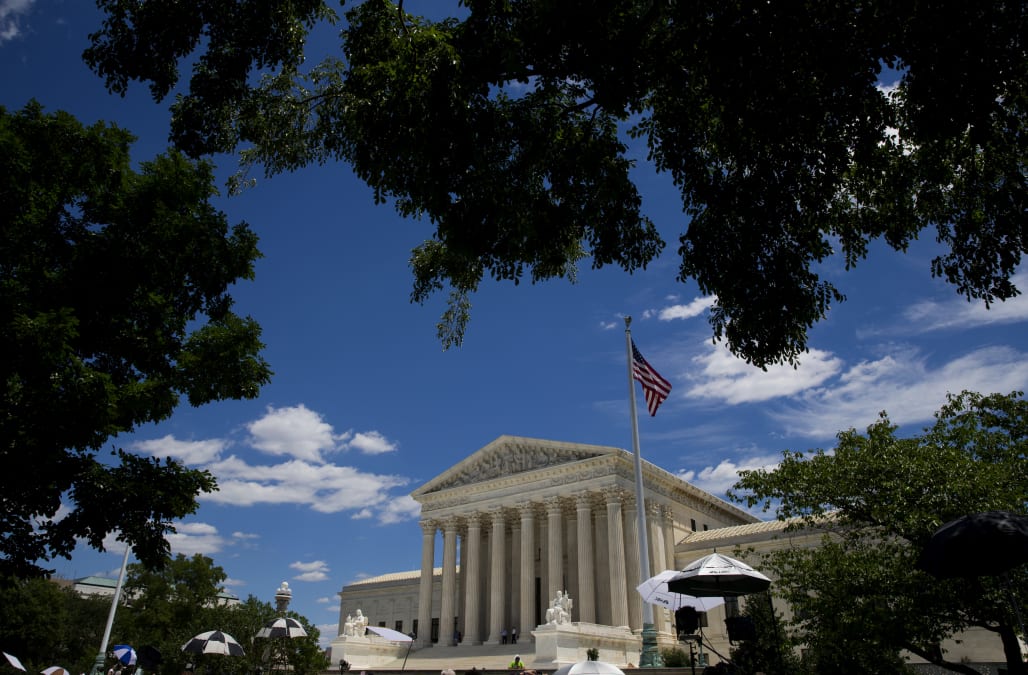 WASHINGTON (Reuters) - U.S. Attorney General Jeff Sessions said on Friday that the Justice Department will ask the Supreme Court to block a judge's ruling that prevented President Donald Trump's travel ban from being applied to grandparents of U.S. citizens and refugees already being processed by resettlement agencies.

Sessions said in a statement that the administration would "reluctantly return directly to the Supreme Court" in a bid to overturn Thursday's decision by a U.S. district judge in Hawaii, which limited the scope of the administration's temporary ban on refugees and travelers from six Muslim-majority countries.

The Supreme Court last month said the ban could take effect, but that people with a "bona fide relationship" to a U.S. person or entity could not be barred.

The administration had narrowly interpreted that language, saying the ban would apply to grandparents and other family members, prompting the state of Hawaii to ask Hawaii-based U.S. District Judge Derrick Watson to expand the definition of who could be admitted.

The conservative-leaning Supreme Court is not currently in session, but the justices can handle emergency requests. The administration's application could be directed either to Justice Anthony Kennedy, who has responsibility for emergency requests from western states, or to the nine justices as a whole. If the court as a whole is asked to weigh in, five votes are needed to grant such a request.

Separately, the Justice Department filed papers in Hawaii federal court saying it would appeal Watson's ruling to the San Francisco-based 9th U.S. Circuit Court of Appeals. It was not immediately clear whether that is a separate appeal.

Earlier on Friday, White House homeland security adviser Tom Bossert told reporters that the ruling appeared to be "fairly broad and something that would trouble me if it was as broad as reported."

Bossert, speaking aboard Air Force One as the president returned from a trip to Paris, focused his remarks on the part of the ruling that would allow more refugees to enter the country, saying the ruling could be interpreted as "so expansive as to cover every refugee."

In his decision, Watson harshly criticized the government's definition of close family relations as "the antithesis of common sense."

Banned Grandmas Instagram account protests Trump's travel ban
@hdagres is the curator of @theiranist and her Mamani is newly banned from the US.
@kia4congress's grandma 💜
Camilla Razavi with that mamani mach-o-boos #muslimban #nobannowall
Yasmin's grandma is guilty of the wild belief that each meal must be accompanied by sherry and a cigarette
Meet @anpour's late grandmother. She used to come to the US for medical treatments for her hearing. Posting this in memoriam of her and other mamanis who come to the US for medical reasons.
@destinationunknown's grandma's crime? Making amazing kookoo sabzi
Throwback to when Reza's grandma WAS allowed in the US and made it to his graduation.
Amir just finished law school in NY, but his grandma is barred from visiting to celebrate him.
Vahid 💜's his mamani
Maman Saideh won't be in NYC for Asal's graduation from Columbia University - via @maya_1957
This is Alison's mamani. Probably guilty of too much mach-o-boos.
@sanamche is an Iranian architecture student in NY. This is her grandma. Clearly this is a ban on torshi, not terrorism.
Check out the plate of shirini beside @shayanmodarres's grandma. The US will be less sweet by barring her entry.
Up Next


Watson also ruled that the assurance by a resettlement agency to provide basic services to a newly arrived refugee constitutes an adequate connection to the United States because it is a sufficiently formal and documented agreement that triggers responsibilities and compensation.

The ruling, if left in place, means refugees can continue to be resettled in the United States, beyond a cap of 50,000 set by the executive order. That limit was reached this week.

The Supreme Court's decision last month revived parts of Trump's March 6 executive order banning travelers from Iran, Libya, Somalia, Sudan, Syria and Yemen for 90 days, as well as refugees for 120 days. The court also agreed to hear oral arguments in the fall over whether the ban violates the U.S. Constitution.