Presidents Bush and Clinton: Be humble in victory, responsible with power 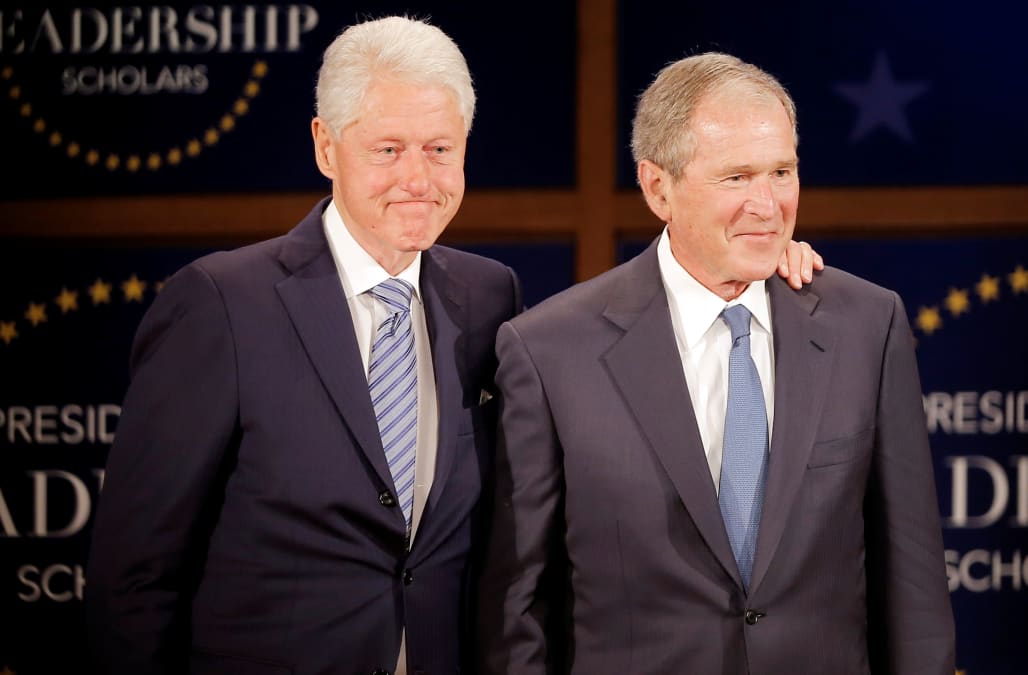 DALLAS (Reuters) - Former U.S. presidents George W. Bush and Bill Clinton told a forum in Dallas on Thursday that they were able to forge mutual bonds of respect and friendship because the other had been gracious in victory and respectful of presidential power.

The two did not mention President Donald Trump once during a nearly hour-long discussion where they traded quips and insights. But they offered indirect references that many in the crowd of about 300 people at the George W. Bush Presidential Library took to be references to the current president.

President Clinton speaks outside the U.S. Capitol following his inauguration as the 42nd President of the United States.

Spectators gather at the US Capitol Building to witness President Bill Clinton's first inauguration into office. Bill Clinton stands with his wife Hillary and daughter Chelsea as he takes the oath of office.

Democrat Bill Clinton (L) is sworn in by Supreme Court Chief Justice William H. Rehnquist (R) as the 42nd President of the United States as his wife Hillary (C) looks on during the inaugural ceremony at Capital Hill, January 20.

U.S. Senator John Warner of Virginia, co-chairman of the Congressional Joint Inauguration Committee, points out the view from the presidential inauguration podium to ABC news reporter and anchor Barbara Walters as final preparations continue at the U.S. Capitol January 19 for President Clinton's inauguration ceremonies. Clinton will be sworn in for a second term at noon on January 20.

U.S. President George Bush (L) greets President-elect Bill Clinton (R) upon his arrival 20 January, 1993 to the White House in Washington, DC to meet Bush for a pre-inaugural coffee. Clinton was sworn in as the 42nd U.S. President later 20 January.

Press photographers and remote cameras are focused on President Clinton as he is sworn in on Capitol Hill, January 20. Clinton is the first Democratic president to be inaugurated for a second term since Franklin-Roosevelt.

President Clinton and his family, first lady Hillary Rodham Clinton and daughter Chelsea, applaud during the opening act at the Presidential Inaugural Gala in Landover, January 19. The president attended the star-studded revue on the eve of his inauguration to start his second term.

WASHINGTON, : The Clintons and the Gores applaud as jump ropers perform in front of the reviewing stand during the inaugural parade 20 January in Washington, DC. US President Clinton was sworn in earlier on Capitol Hill for his second term as US president.

President Clinton, first lady Hillary and daughter Chelsea greet crowds along the inaugural parade route near the White House after they emerged from their armored Cadillac to finish the parade on foot January 20. President Clinton was sworn-in for the second time as the nation's 42nd president.

Chelsea Clinton holds Tyler Clinton, son of President Clinton's brother Roger, as they watch the inaugural parade from the White House reviewing area January 20. President Clinton was sworn in for the second time as the nation's 42nd president.

Diana Ross performs on the steps of the Lincoln Memorial with the statue of Lincoln behind her as part of the American Reunion celebration on the mall kicking off the Inuagural events for President William Jefferson Clinton.

The U.S. Capitol is readied for the second inauguration of President Clinton early January 20 . Clinton will be the first Democratic president to be inaugurated for a second term since Franklin Delano Roosevelt.

President Clinton and his family (L) and Vice President Al Gore and his family (R) review the troops during inaugural ceremonies at the United States Capitol, January 20. Earlier in the day, Clinton took the oath of office on the steps of the capitol to begin his second term in the White House.

President Clinton, accompanied by House Speaker Newt Gingrich (R), waves as he arrives at the U.S. Capitol to be inaugurated as the 42nd president of the United States January 20. Clinton is the first Democratic president to be sworn in to a second term since Franklin Delano Roosevelt.

The U.S. Capitol is decked in bunting as President Clinton delivers his inauguration speech after being sworn in for a second term, January 20. Clinton is the first Democratic president to be re-elected in 50 years.

U.S. President Clinton is sworn in for a second term as President by U.S. Supreme Court Chief Justice William Rehnquist (R) as Clinton stands on the West steps of the United States Capitol with his wife Hillary and daughter Chelsea at his side, January 20. Vice President Al Gore and his wife Tipper look on at rear.

President Clinton and First Lady Hillary Rodham Clinton embrace as they dance at the first inaugural ball of the evening at the Old Post Office Building in Washington, January 20. The Clintons are scheduled to appear at 15 balls to cap the inaugural festivities.

(Photo by Visions of America/UIG via Getty Images)

(Photo by Visions of America/UIG via Getty Images)

Bill and Hillary Clinton along with David Dinkins stand on stage January 20, 1993 in Washington, DC. Eleven inaugural balls were held on the same evening in honor of President Clinton's election.

A member of the U.S. Marine Corps Marching Band tunes up 20 January, 1993 in front of the U.S. Capitol Dome prior to the start of the inauguration of William Clinton in Washington, DC. President-elect Clinton will be sworn-in at noon to become the 42nd President of the U.S.

American poet Maya Angelou reciting her poem 'On the Pulse of Morning' at the inauguration of President Bill Clinton in Washington DC, 20th January 1993.

Uncle Sam, played by Steve Myott of Greenville, North Carolina, looks down while a police officer walks between his legs as Myott performs along the route of US President Bill Clinton's inaugural parade in Washington, DC 20 January. The parade, celebrating the beginning of President Clinton's second term in office, goes along Pennsylvania Avenue from the US Capitol to the White House.

African National Congress (ANC) President Nelson Mandela (R) and Lindiwe Mabuza (L), the ANC's chief representative to the U.S., look up at the U.S. Capitol in Washington DC, 20 January 1993, after taking their seats for the inauguration of Bill Clinton as the U.S.'s 42nd president.

SWEARING IN--The Children of the Gospel choir performs during the swearing in ceremony of President Clinton.

Stevie Wonder performs at Bill Clinton's inaugural gala January 19, 1997 in Landover, MD. On November 5, 1996, Clinton was elected to his second term as the forty second President of the United States.

The Washington Monument as pictured on the morning of the First Presidental inauguration of Bill Clinton in Washington, DC.

Ramona Howard, of St. Louis, Mo, puts up a message to President-elect Bill Clinton on the 'American Town Hall' 18 January, 1993 during inaugural festivities on the Mall in Washington, DC. President-elect Clinton is scheduled to take the oath of office 20 Jan to become the next president of the United States.

"He (Clinton) was humble in victory, which is very important in dealing with other people," Bush said at the event to mark a graduation at the Presidential Leadership Scholars program, a partnership among the Bush, Clinton, Lyndon Johnson and George H.W. Bush presidential centers.

Clinton said: "If you want to be president, realize it's about the people, not about you.

"You want to be able to say 'things were better off when I quit, kid's had a better future, things were coming together.' You don't want to say, 'God, look at all the people I beat.'"

Current President Trump has come under criticism from Democrats who have said he fires off excessive and unwarranted criticism against his predecessor, Democratic President Barack Obama and the person he beat in the election, Democrat Hillary Clinton.

Republican Bush said while in office he sought Democrat Clinton's advice. Clinton said when he left office he told incoming President Bush that he would offer him help and treat him with respect.

Bush and Clinton said they have enjoyed their lives after the presidency but would not trade their current status for their eight years in office.

"The decisions you make have a monumental effect on people," Bush said, adding humility is a key quality for any president.

"Presidency is often defined by the unexpected. It makes the job interesting," he said.

Clinton said: "If you don't deal with the incoming fire, it will undermine your ability to do anything else. If all you deal with is incoming fire, you can't keep the promises you made when you were running."

The two also exchanged jokes about being grandfathers, with Bush saying his grandchildren call him "jefe," Spanish for "chief."

"The best thing that can happen to you when you are in politics is to be consistently underestimated," Clinton said.

"I was pretty good at that," Bush returned.