'Pimps are stopping traffic!' Milwaukee councilman says ’24/7′ prostitution is out of control 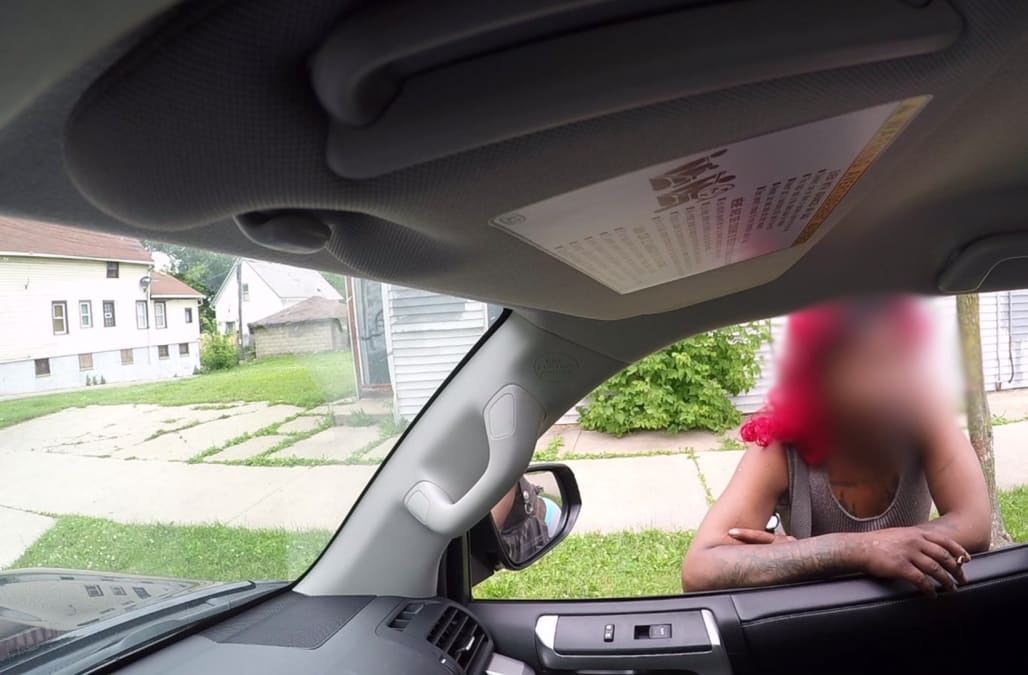 MILWAUKEE (WITI)— They call them 'ladies of the night,' but in one Milwaukee neighborhood, prostitutes are doing business in broad daylight. Now, one Milwaukee alderman is so fed up, he's planning to use private security to do what he says police will not.

For years, 8th District Milwaukee Alderman Bob Donovan has been harping on police to do more about drugs and prostitution on the city's near south side; still, he says it's never been as blatant as it is right now. How bad is it? Consider what happened on a recent Friday afternoon.

It's just shy of 2pm. A man pulls up to the corner of 22nd and Greenfield in a brand new, black Toyota 4Runner. Standing at the corner is a young woman with bright pink hair, a half shirt, and tight, white pants. The two make eye contact. The woman nods. The SUV pulls around the corner and parks. The driver rolls down the passenger side window.

"Hang on a minute," the driver replies. "So how does this work, 'cause I've never done this before?"

That's when the man identifies himself as FOX 6 Investigator Bryan Polcyn. The SUV is a company vehicle and it's equipped with hidden cameras. The woman is a prostitute. And, even after learning the driver's identity, she keeps talking.

'Pimps are stopping traffic!' Councilman says ’24/7′ prostitution is out of control
Up Next

She's a regular here on Greenfield Avenue -- a hotbed of prostitution and human trafficking.

The human sex trade is a multi-billion dollar industry and, according to federal prosecutors, Milwaukee is a major hub.

"Wisconsin is perceived as a place, perhaps, where you can get away with it," said James Santelle, US Attorney for the Eastern District of Wisconsin, which is aggressively pursuing those who traffick women.

Prostitutes once considered criminals are now seen by the criminal justice system as victims of what some call modern-day slavery.

"The romance was over," said Nancy Yarbrough, a sex trafficking survivor. "It was about money and I was his product."

But the booming illegal sex trade has created another set of victims -- the people who live and work where the prostitutes operate.

"For the last couple of years, you know, it's just gotten terrible," said Joel Jaeger, Pastor of Christ Evangelical Lutheran Church. Jaeger says he's been propositioned at least 10 times in his 15 years there.

"'You get in your garage and there she is in the garage. 'So, you want to party?'" Jaeger said.

The church sits at 23rd and Greenfield, where the sex trade is routinely on display. And not just nights and weekends, but seven days a week. Rain or shine. Even on a recent Sunday morning, in plain view of Christ Evangelical's annual outdoor service.

"If you came and sat in our window I don't think an hour would go by where you wouldn't see a prostitute loitering," Jaeger said.

Evidence of the problem -- spent needles and used condoms -- is strewn about the curbs and alleys around the church. It's not secret what goes on out here. Police know all about it.

"They have got a police surveillance camera located right on the corner of 23rd and Greenfield capable of being monitored 24/7," said Bob Donovan, 8th District Alderman for the City of Milwaukee.

"Why aren't they taking action and addressing this problem?"

The prostitute who approached FOX 6 Investigators said police don't really mess with them much.

Last month, Milwaukee Police say District 2 officers did arrest 42 prostitutes and 26 of their customers, commonly referred to as 'Johns.' But police did not seek criminal charges against any of them. Instead, officers wrote 68 municipal tickets.

"These municipal tickets are a joke!" Donovan said.

"It is worthless. They rip it up in an hour later they're back," Jaeger said.

For many of the sex workers quitting isn't an option.

"It's kind of a choice and it's kind of by force," the prostitute told FOX 6. "Because, I'll be honest. I'm a heroin addict, so I have to have heroin everyday."

For some of the drug-addicted sex workers, their only source for a fix may be a guy like 46-year-old Isaac Phillips, a convicted drug dealer who is wanted for trafficking women just a few blocks from Christ church.

"Pimps! Pimps are stopping traffic on Greenfield avenue," Donovan said, "to meake it easier for the prostitutes to approach cars."

"We've got a serious problem," he said.

On Monday, July 10th, Donovan called a news conference outside the church to announce that the city is suing the owners of a nearby house they call a 'hub of prostitution.' Next week, he plans to announce another project.

He says he will be working with a private security firm to record prostitution activity, then send letters to the registered owners of the cars involved. The city attorney's office recently gave him a cautionary green light to start that program, though it's not yet clear who is paying for it.

"We are doing the absolute best we can to address this problem," Donovan said.

Donovan knows it will take more than 'Dear John' letters to stop the prostitution. Just a few minutes after his news conference was over, we spotted a woman posing for passing traffic less than a block away. It was the same woman who approached FOX 6 Investigators a few days earlier.

Only this time, she was not so happy to be recorded.

"You better stop f***ing following me and get that f***ing camera out my f***ing face!" she yelled.

She said we were making it hard for her to make money.

Pastor Jaeger says it's people like her who are making it hard to live here. After all those years at 23rd and Greenfield, Jaeger is retiring to a quiet home on the banks of the Rock River in Watertown.

"This will be a change of pace," Jaeger said.

But make no mistake, he says his heart is still on the South Side of Milwaukee.

"I care deeply. I think Milwaukee is a great city," Jaeger said.

A city, he says deserves better than this.

This is not the first time Alderman Donovan has tried to raise awareness about prostitution in his district. 15 years ago, he drove an effort to show pictures of "Johns" on the city's cable TV channel, but that only lasted a year.

Four years ago, he worked with police and the sheriff's department to start towing the cars of those who solicit prostitutes in the area. That also fell by the wayside.

Two weeks ago, the city attorney gave him the green light to start sending his so-called "Dear John" letters to people suspected of paying for sex. Donovan plans to announce the details of that initiative next week.

Milwaukee Police Chief Ed Flynn declined a request for an interview for this story. And he was notably absent from a news conference earlier Thursday announcing the opening of a new "drop-in" center for women in prostitution. County Executive Chris Abele, District Attorney John Chisholm, former Health and Human Services Director Hector Colon and Milwaukee Alderman Jose Perez were among those who spoke in support of the new Bendict Center Sisters' Program drop-in center at 209 W. Orchard, which will provide support and services to women engaged in prostitution and sex trafficking. Assistant Police Chief James Harpole attended the meeting.

The Benedict Center recently entered into a memorandum of understanding with Milwaukee Police to serve as a diversion option. Instead of arresting prostitutes and taking them to jail, police will have the option to send sex workers to the drop-in center. There, they will receive case management services, as well as food, clothing and personal hygiene products.

Alderman Donovan issued a statement Thursday saying he is "not optimistic" that the center will change "anything whatsoever." He said police need to enforce the law and suggested the city should find housing options to get prostitutes away from their pimps.