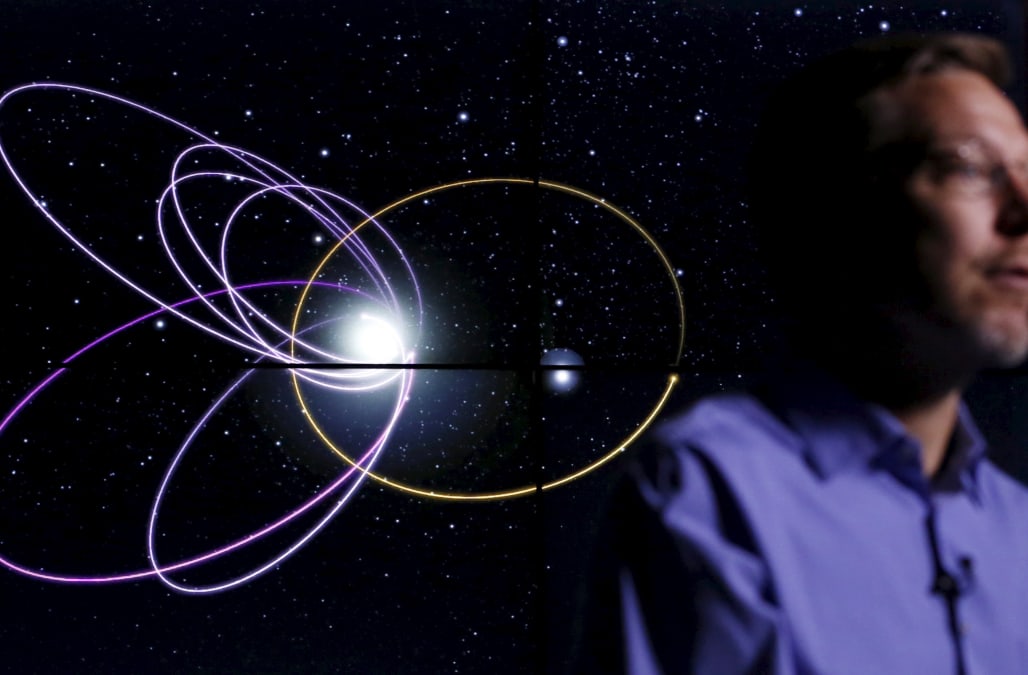 The possible existence of a planet beyond Pluto has long been debated within the scientific community, but astronomers from Spain have released a new paper which they believe affirms its presence.

According to a news release by the Spanish Foundation for Science and Technology, the team "used a novel technique to analyse the orbits of the so-called extreme trans-Neptunian objects [or TNOs] and, once again, they point out that there is something perturbing them: a planet located at a distance between 300 to 400 times the Earth-Sun separation."

Scientists researching the mysterious planetary body, known as Planet Nine, have typically focused on the orbits of TNOs, which are situated past Neptune, mostly in an area called the Kuiper Belt.

As the release notes, in this case, the astronomers focused on extreme TNOs which are "located at average distances greater than 150 AU [or astronomical units] and that never cross Neptune's orbit."

Based on their analysis of these objects' nodes, which are the areas that are most likely to interact with other bodies, the team found that 28 "are clustered in certain ranges of distances from the Sun."

Images from NASA on the largest batch of Earth-size, habitable zone planets
This chart shows, on the top row, artist concepts of the seven planets of TRAPPIST-1 with their orbital periods, distances from their star, radii and masses as compared to those of Earth. On the bottom row, the same numbers are displayed for the bodies of our inner solar system: Mercury, Venus, Earth and Mars. The TRAPPIST-1 planets orbit their star extremely closely, with periods ranging from 1.5 to only about 20 days. This is much shorter than the period of Mercury, which orbits our sun in about 88 days.
This poster imagines what a trip to TRAPPIST-1e might be like.
This artist's concept allows us to imagine what it would be like to stand on the surface of the exoplanet TRAPPIST-1f, located in the TRAPPIST-1 system in the constellation Aquarius.
This data plot shows infrared observations by NASAs Spitzer Space Telescope of a system of seven planets orbiting TRAPPIST-1, an ultracool dwarf star. Over 21 days, Spitzer measured the drop in light as each planet passed in front of the star. Spitzer was able to identify a total of seven rocky worlds, including three in the habitable zone where liquid water might be found.
The TRAPPIST-1 system contains a total of seven planets, all around the size of Earth. Three of them -- TRAPPIST-1e, f and g -- dwell in their star’s so-called “habitable zone.” The habitable zone, or Goldilocks zone, is a band around every star (shown here in green) where astronomers have calculated that temperatures are just right -- not too hot, not too cold -- for liquid water to pool on the surface of an Earth-like world.

This artist's concept appeared on the February 23rd, 2017 cover of the journal Nature announcing that the TRAPPIST-1 star, an ultra-cool dwarf, has seven Earth-size planets orbiting it. Any of these planets could have liquid water on them. Planets that are farther from the star are more likely to have significant amounts of ice, especially on the side that faces away from the star.

They also "found a correlation, where none should exist, between the positions of the nodes and the inclination, one of the parameters which defines the orientation of the orbits of these icy objects in space."

As a result, co-author Carlos De la Fuente Marcos has said, in part, "we interpret these results as signs of the presence of a planet that is actively interacting with them in a range of distances from 300 to 400 AU."

He added, "Given the current definition of planet, this other mysterious object may not be a true planet, even if it has a size similar to that of the Earth, as it could be surrounded by huge asteroids or dwarf planets."

More from AOL.com:
Mars' toxic surface may prevent humans from living there
What have we learned in the year Juno has orbited Jupiter?
Lunar robots put to the test on Sicily's Mount Etna