Jared Kushner is under fire as all eyes turn to the only White House adviser in on the Don Jr. meeting with a Russian lawyer 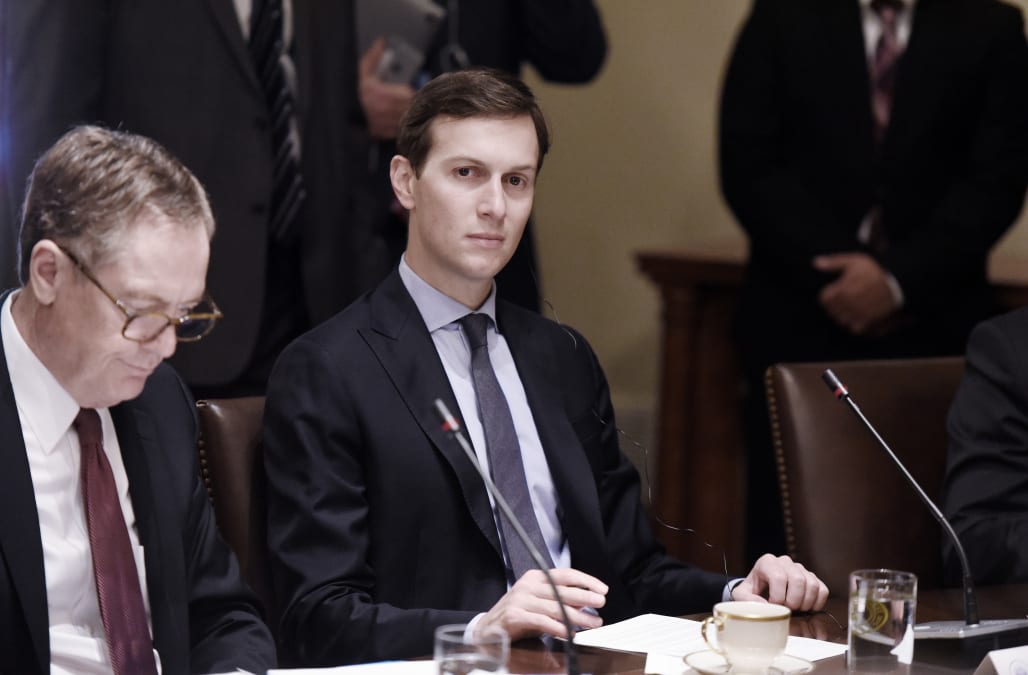 All eyes are on Jared Kushner as the fallout from Donald Trump Jr.'s email disclosure continues.

Kushner was the only current White House staffer who was present for a June 2016 meeting with a Russian lawyer, ahead of which Trump Jr. was promised dirt on Hillary Clinton that he claimed was never presented after the meeting began.

On Tuesday, Trump Jr. posted the emails that were sent to himself, Kushner, and then-campaign chairman Paul Manafort setting up that meeting. And now Democrats and Republicans are questioning why Kushner still has a security clearance.

Deputy White House press secretary Sarah Huckabee Sanders did not tell reporters at Wednesday's off-camera briefing whether Kushner still held that clearance, saying though that "Democrats are trying to play political games" by calling for it to be revoked.

It's not the first time Kushner's security clearance has come under question.

Kushner had to revise his security clearance form after he failed to disclose meetings with Russian ambassador to the U.S. Sergey Kislyak and a Russian banker, which in turn led to The New York Times finding out about the Trump Tower meeting involving Trump Jr., Kushner, Manafort, and the Russian lawyer, Natalia Veselnitskaya. Additionally, the House and Senate intelligence committees and Department of Justice investigators are now looking into whether the Kushner-led Trump campaign digital operation assisted Russia's attacks on Clinton during the 2016 election cycle.

Although Veselnitskaya told NBC News that Kushner "left the meeting after seven to 10 minutes of the 20- to 30-minute meeting," these incidents — with the Trump Jr. meeting now at center stage — have led to calls for Kushner to be stripped of the clearance.

Trump Jr.'s "preemptive release of the emails that led to the meeting with the Russian operative puts Jared Kushner in legal peril," Rick Tyler, communications director for Republican Sen. Ted Cruz's 2016 presidential campaign and now an MSNBC contributor, told Business Insider in an email. "He has consistently failed to make mandatory discloses of meetings with foreign nationals including this one which is a felony."

"Jared should, at a minimum, have his clearances rescinded making his utility as an advisor, which itself is suspect, impractical," he continued.

The email disclosure revealed that Kushner was copied on Trump Jr.'s email chain with Rob Goldstone, a British music publicist who represented a Russian pop star with ties to President Donald Trump and was tasked with arranging the June meeting. That email chain was titled "Russia — Clinton — private and confidential" and noted that a Russian official had "offered to provide the Trump campaign with some official documents and information that would incriminate Hillary and her dealings with Russia and would be very useful to" Trump.

Goldstone described the information as being "part of Russia and its government's support for Mr. Trump," something that prompted Trump Jr. to respond, "If it's what you say I love it especially later in the summer."

The fact that Kushner had the email chain available to him seemed to contradict an earlier statement from Trump Jr., who said over the weekend that Kushner and Manafort were told "nothing of the substance" of the meeting when he asked them to attend.

"Mr. Kushner's decision to take this meeting raises significant questions about his judgment and his respect for the very principles that our democracy was founded on — that our elections should be sacred and free of interference from a foreign adversary," Rep. Elijah Cummings, the ranking member of the House Oversight Committee, told Business Insider in an email.

"His reported failure to disclose this meeting — and numerous others with Russians — when he submitted his security clearance application compounds the problem and is deeply concerning."

Cummings, a Maryland Democrat, sent a letter to Trump Jr., Kushner, and Manafort on Tuesday requesting all of the trio's documents and communications related to the June meeting with Veselnitskaya, contacts with Russians during the campaign and transition, and Kushner's security clearance application and reporting of foreign contacts, travel, and meetings. That followed a letter last month from the Democratic members of the committee to White House chief of staff Reince Priebus requesting documents related to the decision to allow Kushner to keep his clearance after it became public knowledge that he failed to disclose the meetings with Russian officials.

"If the White House was following its own rules regarding security clearances, it would have already suspended Mr. Kushner's clearance pending a full investigation," Cummings told Business Insider, additionally calling for House Oversight Committee chairman Trey Gowdy, a South Carolina Republican, to seek answers from the Trump team.

Still, some feel that Kushner's presence at the meeting will not imperil his status or set him back in any way at the White House.

"I don't believe it will have any effect on his role," famed attorney and Harvard law professor emeritus Alan Dershowitz told Business Insider in an email.

But for Kushner, whom the Times reported Tuesday night is at odds with Trump's top outside counsel in the Russia matter, the story doesn't appear to be going away soon.

"Whether we believe Trump's Jr.'s claim that Kushner did not know the meeting's purpose beforehand is immaterial," Democratic Rep. Don Beyer of Virginia said in a statement. "The fact that Jared Kushner initially omitted this meeting from his [security clearance form], and only disclosed it after coming under considerable scrutiny, implies that he knew something untoward had happened."

"Kushner should not be permitted access to classified material, he should not be empowered to conduct official business on behalf of the American people, and he should not be allowed to continue in any capacity as a counselor to the president," Beyer later added. "He has irrevocably betrayed the public trust. Jared Kushner must resign. If he will not, he should be fired."