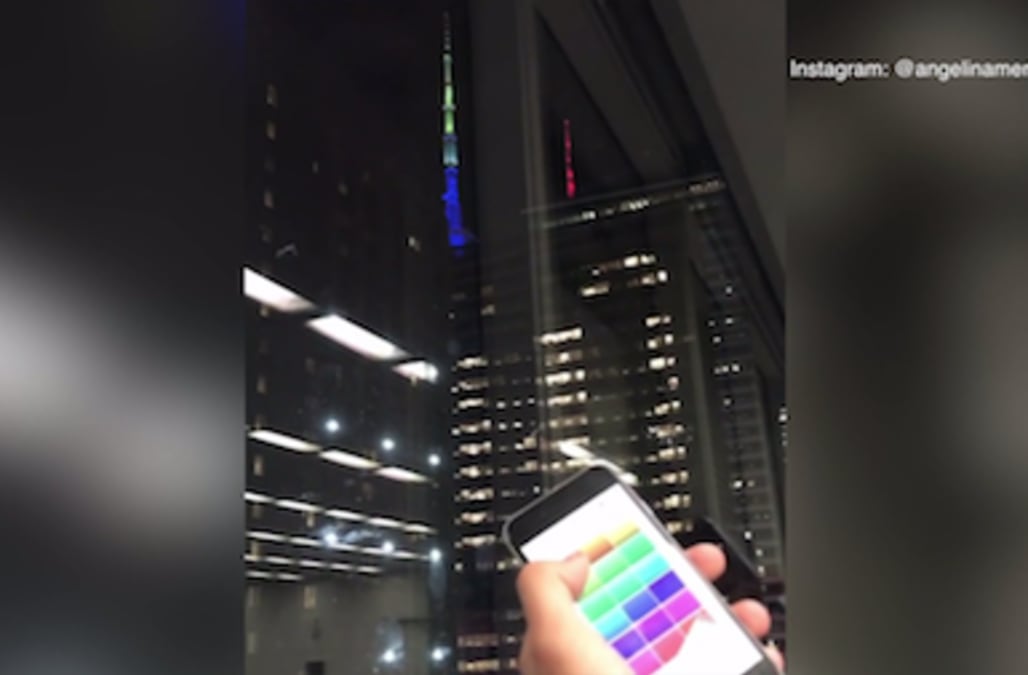 MANHATTAN (WPIX) — It's pretty safe to say, pick-up lines do less "picking up" and more creeping out.

These days, if you're trying to impress a stranger, how about using the allure of Midtown's skyscraper lights.

It's an exclusive invite-only app called Spireworks and it literally puts the power in your hands. With a subtle tap on your phone, users change the spire lights atop two Midtown buildings - One Bryant Park and 4 Times Square.

"It is an experience," Spireworks creator Mark Domino told PIX11 News. "People have shared this experience with others around them in different ways – gender reveals, engagements, magic tricks."

The Spireworks experience is one that is limited, only 10,000 people in the world have access and you need to be invited by another app user in order to flip the switch.

"When they go to control the lights, there's a possibility that up to five other people are currently able to control it with them," Domino explained. "If there's more than five people, there's a queue and you would have to wait a little bit."

Access to the spires is possible on most days after sunset and before 2 a.m., a period when most are out and about in the Big Apple.

Some single men who have access to the app are reportedly using it to impress women in an effort to pick them up. It's an outcome that doesn't surprise the app's developer.

"It's not surprising given the New York nightlife and the number of rooftop venues that have opened in the past couple of years," he said. "I encourage people to think more creatively because I think this is gonna be a thing more and more women and men will have heard of and it will probably be less effective in picking people up."

While some may have their own agenda, the Durst Corporation which owns and operates both buildings, say down the road they hope to enable the app for social and charitable benefits.

The 14 most expensive skyscrapers built in the last 20 years

(INDRANIL MUKHERJEE/AFP/Getty Images)
At $1 billion, Antilia is the world's most expensive residential property behind Buckingham Palace. It's also designed to survive a magnitude 8 earthquake.

Located in Riyadh, Saudi Arabia, the Kingdom Centre cost approximately $1 billion to build. Construction of the 990-foot skyscraper wrapped up in 2002.

The second floor features a shopping mall, bank, and mosque, designated only for women. Designed by Minnesota-based firm Ellerbe Necket, the Kingdom Centre also includes a hotel, offices, apartments, and a 184-foot skybridge.

The Burj Khalifa in Dubai cost approximately $1.5 billion to build. Construction lasted from 2004 to 2009.

Including the antennae, the tower stands 2,717 feet tall, making it the tallest building in the world. Inside, there are residential apartments, eight hotels, shops, restaurants, and offices. Here's the view from the observation deck (also the world's tallest):

Courtesy of ‘At the Top, Burj Khalifa SKY’

The Seat of the European Central Bank (ECB) in Frankfurt, Germany cost $1.25 billion to construct in 2013.

The twin skyscraper houses the headquarters of the ECB, the central bank for the euro.

The tallest building in the UK, it features residences, a hotel, restaurants, offices, a business school, shops, a clinic, and an observatory.

The skyscraper's ground floor features a giant sphere painted gold. The other levels contain offices, shops, and a restaurant.

Constructed in Dubai in 2012, the $2.17 billion Princess Tower houses shops and 763 luxury condos.

The view from the higher floors is stunning.

In the center of the mall, there's a manmade "river" (modeled after the famous one in Venice), where shoppers can take gondola rides.

With a price tag of $3.8 billion, One World Trade Center opened in 2012. Located in New York City, it's next to the site of the original WTC, which is now a memorial for the victims of the September 11 attacks.

In the elevator going up to the observation deck, there's a timelapse projection that shows what Manhattan has looked like every year since 1500.

In 2010, a set of Las Vegas high-rises called the Cosmopolitan was built for $3.9 billion.

One of the Cosmopolitan's main attractions is its giant glowing chandelier. There's also a casino, shops, restaurants, a theater, a gym and spa, and a convention space.

With a price tag of $4.1 billion to construct in 2005, the 614-foot-tall Wynn resort and casino sits on the Las Vegas Strip.

Three towers make up the Marina Bay Sands Resort, which opened in 2010 in Singapore.

With a cost of $5.7 billion, it's billed as one of the world's most expensive casino properties, though it also includes a hotel, a convention center, a mall, a museum, two theaters, seven restaurants, and a skating rink.

At a whopping $15 billion, the Abraj Al Bait features seven towers completed from 2007 to 2012. Located in Mecca, the Saudi Arabian government owns the complex.

At the peak, there's a massive gold-painted crescent, which appears in white on Mecca's flag.

Inside, there are restaurants, a five-story shopping mall, luxury hotels and condos, and a parking garage.

The towers can be seen from inside the holy mosque of Mecca, where crowds flock to pray.