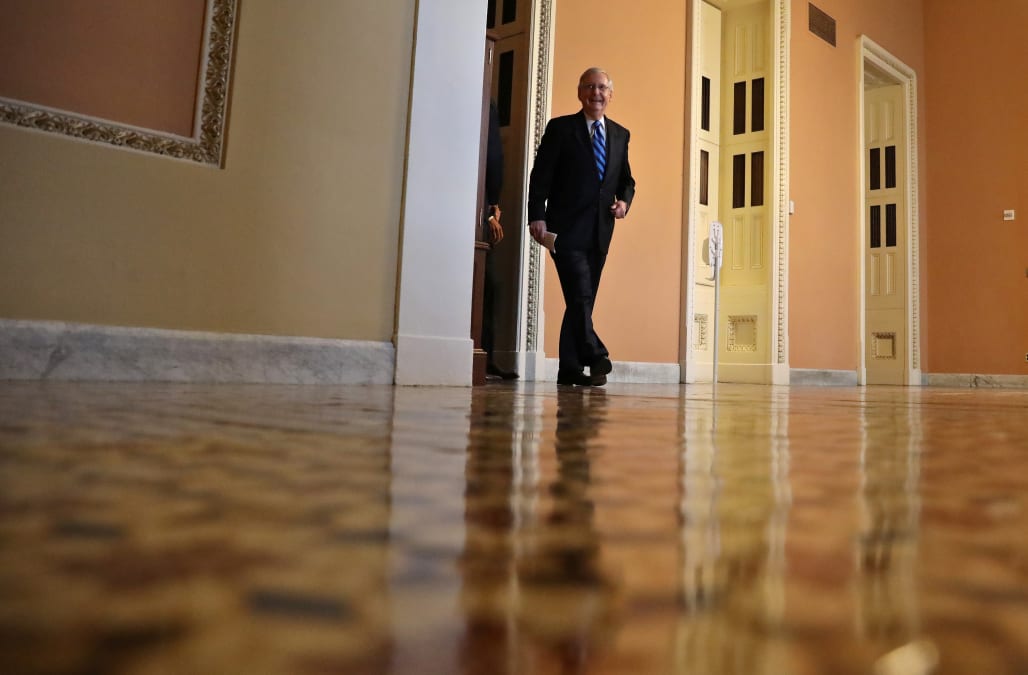 WASHINGTON, July 13 (Reuters) - U.S. Senate Republican leaders are expected to unveil a new version of their legislation to repeal and replace Obamacare on Thursday, amid continued feuding among lawmakers over what should go in the bill and uncertainty over its prospects.

With his reputation as a skillful strategist hanging in the balance, Senate Majority Leader Mitch McConnell will present the revised bill in a bid to unite disparate Republican factions and deliver on his party's signature issue in the 2016 elections. He is aiming for a vote next week.

A Wednesday closed-door meeting did not resolve several disputes among moderate and conservative Republicans over the bill's contents, senators said.

But President Donald Trump, in an interview with the Christian Broadcasting Network, said he would be "very angry" if he does not get a bill on his desk to repeal and replace the 2010 Affordable Care Act, otherwise known as Obamacare.

John Cornyn, the Senate's No. 2 Republican, told Reuters in a Capitol hallway many senators had come to realize they could talk about healthcare "endlessly" without deciding anything. "That's why it's important that we go ahead and schedule the vote," he said.

The House of Representatives passed a healthcare overhaul bill last month. In the interview on Wednesday, the Republican president said McConnell "has to pull it off" in the Senate.

Several of the Senate's 52 Republicans said they were waiting to see the revised legislation before deciding whether to back it. This made it difficult to predict whether it can gather the minimum of 50 votes it will need to pass the 100-vote chamber, with Vice President Mike Pence ready to cast a tie-breaking vote for the bill.

Democrats are united in opposition to the effort to scrap Obamacare.

Conservative Republican Senator Rand Paul made clear he was against the bill and would not even vote to advance it procedurally. He said it would be "worse" than a previous draft because it is expected to leave in place some of the Obamacare taxes on wealthy Americans.

Cornyn said one unresolved issue was whether to include a proposal by conservative Republican Ted Cruz that would let insurers offer basic low-cost healthcare plans that do not comply with Obamacare regulations. Some moderates dislike this, saying it could leave insurers charging more for comprehensive plans that do comply with Obamacare. Insurers weighed in strongly against the idea on Wednesday as well.

The previous draft of the bill unveiled last month would phase out the Obamacare expansion of Medicaid health insurance for the poor and disabled, sharply cut federal Medicaid spending beginning in 2025, repeal many of Obamacare's taxes, end a penalty on individuals who do not obtain insurance and overhaul Obamacare's subsidies to help people buy insurance with tax credits.

Moderate Republican senators are uneasy about the millions of people forecast to lose their medical insurance under the legislation and hard-line conservatives say it leaves too much of Obamacare intact. (Additional reporting by Yasmeen Abutaleb and Caroline Humer; Editing by Mary Milliken and Tom Brown)

More from AOL.com:
'WE WILL GO FROM MAJORITY TO MINORITY': It's starting to look ugly for the Republican health care bill
Senate Republicans are lining up for a 2nd try on their healthcare bill
Health care vote looming, Democratic Rep. Joe Kennedy slams GOP for poor 'backroom deal' effort