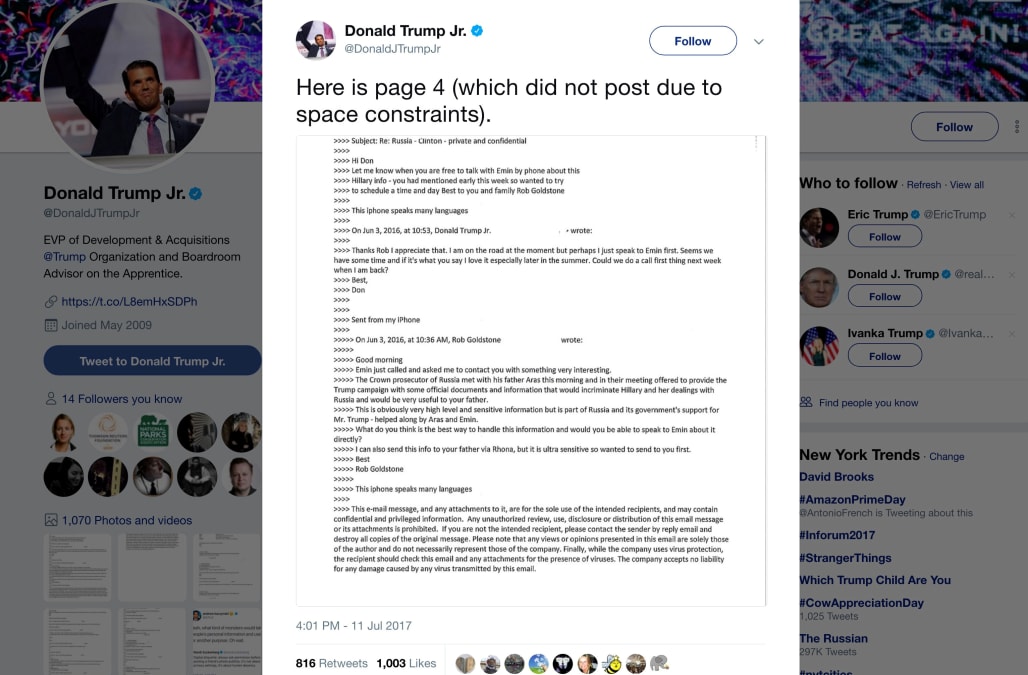 President Donald Trump and his senior advisers are described as increasingly angry and exasperated by the ongoing story of the 2016 Trump campaign's connections to Russia.

The New York Times, Washington Post and CNN are among the major news organizations reporting a White House in deep gloom, searching for ways to escape the controversy or move beyond it and eager to blame the media for their plight, as Trump often does when he runs into trouble.

The latest firestorm was ignited by a Times report that Donald Trump Jr., the president's eldest son, had met at Trump Tower in New York with Kremlin-associated lawyer Natalia Veselnitskaya on June 9, 2016, during the presidential campaign. Faced with many questions about the genesis and outcome of the meeting, the younger Trump released a long list of emails designed to quell the furor, but they didn't. At one point in the email chain, Trump Jr. is told that the Russians may have incriminating information against Democratic presidential nominee Hillary Clinton and Trump Jr. expressed an eagerness to hear about it.

Asked if he told his father about his meeting with the Russian lawyer, Trump Jr. said no. He told Fox News Tuesday night, "It was such a nothing--there was nothing to tell." And he said he did nothing wrong.

Also attending the meeting between the Russian lawyer and Trump Jr. were Jared Kushner, the president's son-in-law and a senior White House adviser, and Paul Manafort, who was then Trump's campaign chairman.

President Trump issued a statement through his deputy White House press secretary that, "My son is a high-quality person and I applaud his transparency." Later Tuesday, President Trump wrote on Twitter that his son is "a great person who loves our country!"

David Axelrod, a former chief strategist for Democratic President Barack Obama in the White House, told CNN, "They've got a terrible credibility problem on this," not only with the media but with congressional investigators and special counsel Robert Mueller who is also looking into the alleged Russia connection to Trump, his associates and his campaign and the possibility of collusion.

Axelrod said Trump hasn't appeared on television for several days and he said the president seems to be "pinned down" in the White House as he ponders how to extract himself from the furor. A Trump ally outside the White House told the Post that the new revelations are like a "Category 5 hurricane."

Sen. Tim Kaine, D-Va., the Democratic vice presidential nominee last year, went much further. "Nothing's proven yet, but we're now beyond obstruction of justice in terms of what's being investigated," Kaine told reporters Tuesday. "This is moving into perjury, false statements and even potentially treason."

But Axelrod pointed out that the political damage to Trump won't reach a crisis level unless fellow Republicans distance themselves from him. And this isn't likely to happen soon because, despite the continuing furor surrounding Trump, about 85 percent of Republicans approve of his job performance, Axelrod said.

Trump is scheduled to visit France this week on an official trip, which his supporters hope will draw attention away from the Russia story.

The Times and the Post both reported that the president and his top aides are fuming about their predicament and are working out a response.