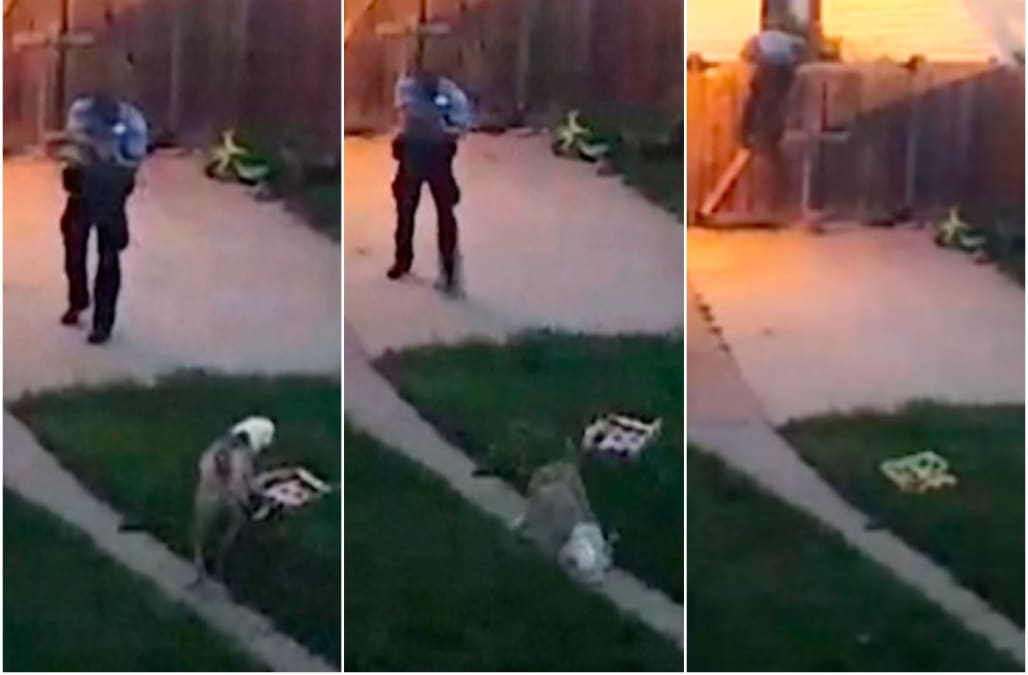 A surveillance camera captured footage of a Minneapolis police officer shooting both of her dogs at point-blank range while responding to a burglary alarm at her residence on Saturday.

According to the Minneapolis Star Tribune, the incident occurred after police were called to Jennifer LeMay's home when her burglary alarm activated.

LeMay's surveillance video shows an unidentified officer with the Minneapolis Police Department standing in her backyard when a white Staffordshire terrier, Ciroc, began to approach him while wagging his tail. The officer then backed way from the canine before shooting it in the jaw.

"He was wagging his tail," LeMay told the newspaper. "My dog wasn't even moving, lunging toward him or anything."

After the officer shot the first dog, a second Staffordshire terrier named Rocko began to approach the man, which prompted the officer to shoot again.

The police report alleged that "two large size pit bulls charged at [the] officer" before he opened fire.

Lemay wrote on Facebook that the dogs were not attacking or charging at the cop, posting an actual clip of the incident Sunday. At this time, the post has accrued nearly 500,000 views.

"My dog had stopped. My dog wasn't even facing him to charge him or be in an aggressive manner to him. You still shot him," she said.

Corey Schmidt, a Minneapolis Police spokesman, released a statement to the Star Tribune.

"Anytime an officer discharges their firearm in the line of duty there is an investigation that is completed by the Minneapolis Police Department's Internal Affairs Unit," the statement said. "We are in the process of reviewing the video posted online, as well as the officer's body camera video. We have reached out to the owner of the dogs and will continue to do so during the investigation. At this time there is no further information we can release."

LeMay created a GoFundMe page to help offset medical bills for her dogs.