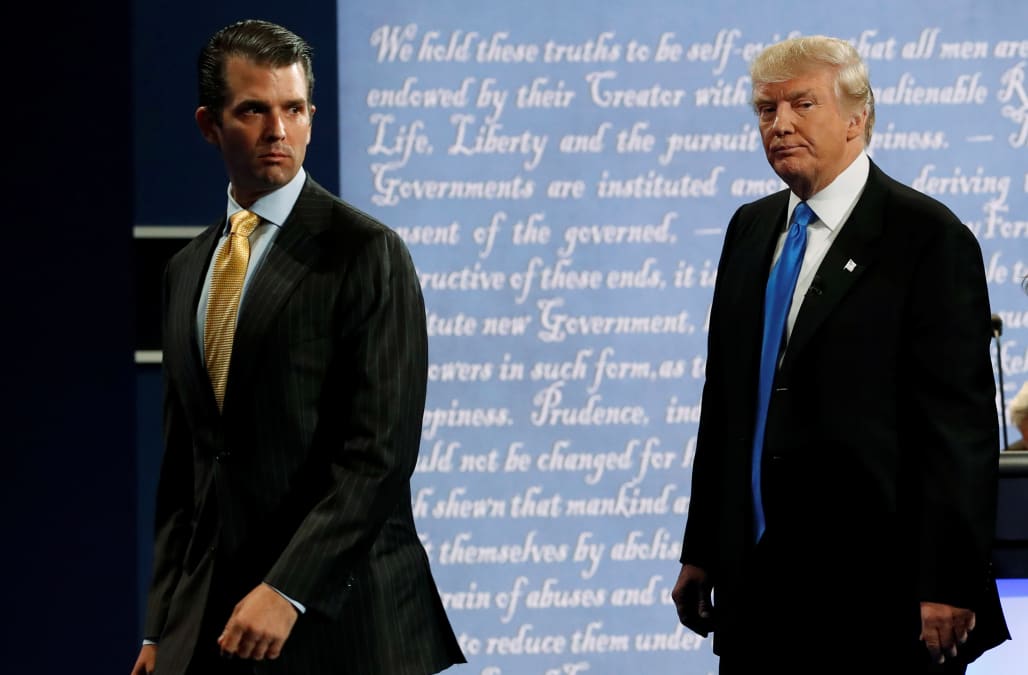 NEW YORK, July 11 (Reuters) - Donald Trump Jr.'s meeting with a woman he was told was a Russian government lawyer who had incriminating information about Democratic candidate Hillary Clinton that could help his father's presidential campaign could lead investigators to probe whether he violated U.S. election law, experts said.

Trump Jr. met the woman, lawyer Natalia Veselnitskaya, on June 9, 2016, after an email exchange with an intermediary.

The emails, tweeted by Trump Jr. on Tuesday, could provide material for Special Counsel Robert Mueller's probe into possible collusion between the Trump campaign and Russia during the 2016 presidential election.

In one of the emails dated June 3, 2016, Trump Jr. wrote: "If it's what you say I love it." He released the tweets after the New York Times said it planned to write about their contents and sought his comment.

Trump Jr. said in his tweets that nothing came of the meeting. Veselnitskaya told NBC News early on Tuesday she was not affiliated with the Russian government and had passed no information.

"In retrospect, I probably would have done things a little differently," Trump Jr. said in an interview on Fox News. "For me, this was opposition research."

Collusion itself is not an actual crime under the U.S. criminal code, so prosecutors would look to see if Trump Jr.'s conduct ran afoul of a specific law, legal experts said.

Moscow has denied interference in the U.S. election, and President Donald Trump has said his campaign did not collude with Russia.

Alan Futerfas, Trump Jr.'s lawyer, did not respond to a request for comment. A spokesman for Mueller declined to comment.

One law that might come into play is the Federal Election Campaign Act, which makes it illegal for a foreign national to contribute to a U.S. political campaign. The campaign is also prohibited from soliciting such contributions.

A contribution does not have to be monetary in nature, according to Paul S. Ryan, an attorney with watchdog group Common Cause. He said incriminating information about Clinton could be considered a contribution under the act.

Ryan said Trump Jr.'s "enthusiastic response" to the offer for information and particularly his proposal in his email to have a follow-up call the next week constituted "solicitation."

"That to me is an indication, a concession by Donald Trump Jr. that he wants and is requesting this information," Ryan said.

Joshua Douglas, a professor at the University of Kentucky College of Law, said Trump Jr.'s emails made it "more plausible" that there could be a criminal case against him.

James Gardner, an election law expert at the University of Buffalo Law School, said the election law was intended to target donations of cash or goods and services.

He said he did not believe Trump Jr. would have violated the law if he solicited damaging information about Clinton.

A federal law known as the general conspiracy statute that makes it illegal to conspire to commit a crime against or defraud the United States could also come into play if, for example, Trump Jr. tried to help Russians hack into U.S. computer networks. There was no indication that Trump Jr. did such a thing.

Andrew Wright, a professor at Savannah Law School who was associate counsel in the White House Counsel's Office under former Democratic President Barack Obama, said he thought Trump Jr.'s agreeing to meet with someone to discuss an illegal act would be enough to trigger a conspiracy charge.

"It's a very powerful tool," he said. (Reporting by Jan Wolfe; Additional reporting by Lindsey Kortyka; Editing by Anthony Lin and Noeleen Walder)