'WE WILL GO FROM MAJORITY TO MINORITY': It's starting to look ugly for the Republican health care bill 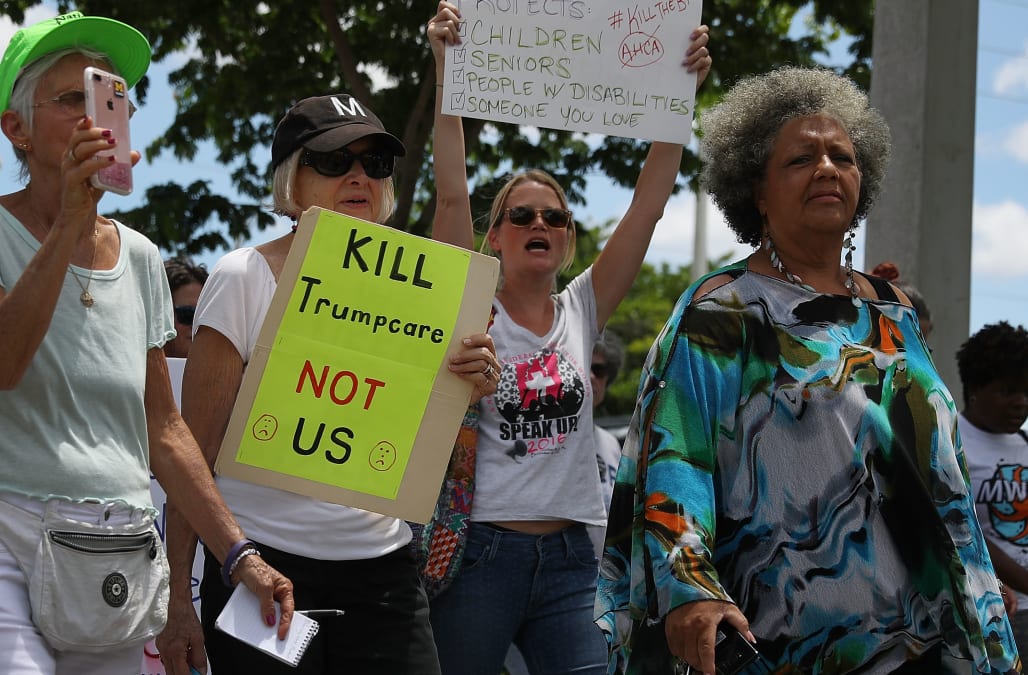 Senate Republicans are set to come back from a week-long recess facing ever-dimming chances to pass their stalled health care legislation.

Continued public pressure and few concrete solutions have left the Better Care Reconciliation Act (BCRA) seemingly further away from passage than before the July 4 break.

A week in which lawmakers have faced pressure from constituents at home has left the legislation's math on the wrong side of passage, as moderates and conservatives continue to disagree about fundamental issues within the bill.

On Sunday, many Republicans openly questioned whether the GOP could deliver on a bill before the August recess.

Sen. Chuck Grassley, who in meetings last week expressed misgivings about the current form of the BCRA, used Twitter to express displeasure with the current state of affairs in the health care debate.

Sen. John McCain was also downbeat during an appearance on CBS's "Face the Nation."

"I think my view is it's probably going to be dead, but I've been wrong," McCain said. "I thought I'd be president of the United States. But I think, I fear, that it's going to fail."

Sen. Bill Cassidy of Louisiana also declared the current BCRA "dead" in an appearance on "Fox News Sunday." He placed the odds of a deal at "50-50."

Senate Majority Leader Mitch McConnell can only afford to lose two votes on the BCRA with universal Democratic opposition. Republican leadership is now targeting the week of July 17 for a vote on the bill, reports have suggested.

"Discussions with members and the CBO continue," an aide to McConnell told Business Insider, referring to the nonpartisan Congressional Budget Office.

But given the tumultuous week, many GOP lawmakers are already looking ahead to what happens if the bill fails.

"Republicans we talk with are impatient — they want to ditch the health debacle and move on to pivotal budget issues and then, of course, begin deliberating tax cuts," said Greg Valliere, the chief global strategist at Horizon Investments.

The most apparent troubles for the Republican conference came in the form of public reaction to their healthcare bill, which a survey this week showed had 17% support from US voters.

In a variety of public events and forums over the week-long recess, GOP lawmakers got an earful from constituents among the 83%. Even members who opposed the initial version of the health care legislation faced pressure.

Sen. Susan Collins of Maine received from praise from constituents for her strong stance against the BCRA, but some implored her to remain steadfast in her opposition during a July 4 parade in Eastport, Maine.

Sen. Jerry Moran of Kansas also faced pressure to maintain his stance against the legislation during a town hall on Thursday. Typically a safe bet to stick behind the GOP leadership, Moran repeatedly expressed his misgivings over the BCRA.

"The Affordable Care Act creates significant difficulties that still need major attention," Moran told reporters after the town hall. "But I think at this point, it's time to figure out how ... to get rid of the bad things and improve on the things that need to be improved."

Moran was one of only a handful of Republicans to hold events open to the public, including BCRA skeptics Bill Cassidy (who favors a more moderate approach) and Ted Cruz (who wants a stronger repeal). Cruz is pushing for an amendment to be added to the bill favored by conservatives, which would make it easier for states to opt out of certain Obamacare regulations.

Cruz also faced fervent pushback at various meetings around Texas. According to The Washington Post, Cruz repeatedly encountered protesters and continually reiterated his desire to repeal the ACA.

Other GOP senators seemed to move further away from supporting the legislation during the break. And for differing sides in the caucus, that could lead to drastically different alternatives.

Sen. John Hoeven of North Dakota — who, like Moran, typically sides with leadership, said he was opposed to the BCRA in its current form during a meeting with constituents and health officials, according to the Bismark Tribune.

This presented another potential defection for McConnell, who spoke at a private function about the possibility of working with Democrats if Republicans are unable to pass the legislation.

"If my side is unable to agree on an adequate replacement, then some kind of action with regard to the private health insurance market must occur" the Kentucky senator said.

McConnell also said that "no action is not an alternative."

Similarly, Cruz expressed skepticism over the possibility of passage during meetings in Texas throughout the week. The one-time presidential candidate, however, had a different end result if Republicans are unable to work out a compromise.

"If we cannot bring the conference together and agree on repeal legislation, then I think President Trump's absolutely right that we should pass a clean repeal," Cruz said.

That approach is favored by Cruz and others like Sens. Rand Paul and Ben Sasse. Trump has also suggested moving forward with a simple Obamacare repeal bill if negotiations fall apart. That would at least, they say, fulfill a key GOP promise and allow lawmakers more time to draft an acceptable replacement.

But McConnell and more moderate members would rather work with Democrats on a short-term plan to stabilize the insurance markets, lest they deteriorate even worse. Based on polling from the Kaiser Family Foundation, a nonpartisan health policy think tank, voters are more inclined to pin any further harm to the healthcare market on Republicans.

SEE ALSO: Ted Cruz's plan to save the Senate health care bill is gaining steam — but it might not fix Republicans' biggest problem