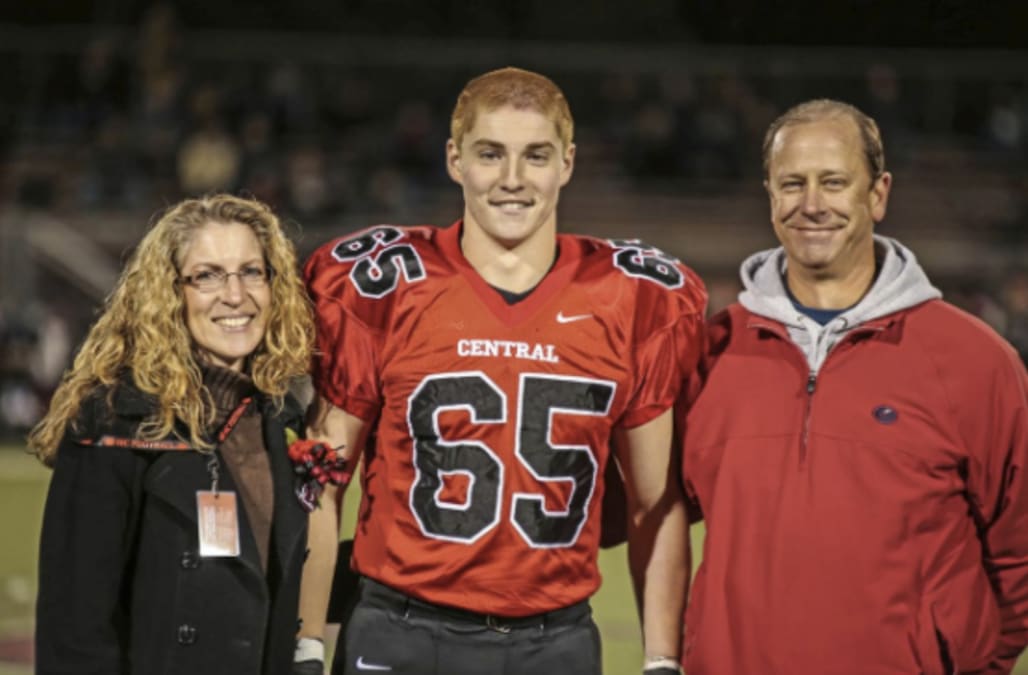 BELLEFONTE, Pa. — A shouting match between prosecution and defense teams erupted Monday in a Pennsylvania courtroom shortly after potentially incriminating text messages were revealed during a preliminary hearing in the case of a Penn State student who died during an alleged hazing incident.

Piazza died after falling down a flight of basement steps in the Beta Theta Pi frat house after a night of heavy drinking, according to authorities.

Another text message from a fraternity brother read, "I think we are f----d. Like beyond f----d."

Other texts presented by the prosecution urged the brothers to keep the new pledges "quiet," while one seemed to acknowledge how damaging an accusation of hazing could be for the men.

"I don't want to go to jail. Hazing is a huge thing," the text said.

Parks Miller also presented a Google search made by one of the fraternity brothers, which read, "How will nine drinks in an hour affect a 200-pound guy?"

A text from fraternity brother Daniel Casey to member Lars Kenyon allegedly told him to "end that GroupMe so there's no evidence on Tim's phone." The messaging app "GroupMe" deletes messaging history if the person who started the chat deletes a conversation. The brothers also used the app to plan social gatherings, prosecutors said.

It was shortly after some of the texts were shown that a squabble broke out between Parks Miller and Ted Simon, the defense attorney for fraternity brother Luke Visser, who is charged with aggravated assault.

"Play the tape," Simon said, accusing Parks Miller of leaving out key portions of evidence, which includes chunks of the surveillance video from inside the Beta Theta Pi house that she played at last month's court hearing.

"Shame on you!" Parks Miller fired back. "(You're) lying to the judge."

Judge Allen Sinclair has seemed reluctant to step in when Parks Miller and defense attorneys have openly clashed during the proceedings. Several of the lawyers have argued the prosecution has left out portions of evidence that would benefit their respective clients.

"What the Commonwealth is doing is cherry-picking," another defense attorney said.

Later, the prosecution noted that $2,000-worth of alcohol was purchased prior to the events that led to Piazza's death.

A 911 call — placed by fraternity brother Ryan McCann — was played in court by the prosecution. In the call, McCann said that a friend was "unconscious" and acknowledged that alcohol was involved. He did not disclose that Piazza had fallen.

The hearing, which is scheduled to last at least through Tuesday, is for Sinclair to determine if there's enough evidence to head to trial.

Early on Monday, Tom Kline, the Piazza family's attorney, told TODAY that he believed the evidence the prosecution would present "will demonstrate that the defendants who are all charged with various crimes will be held over for trial."

On Monday afternoon, Kline told reporters the text messages had been "devastating" for the family to read.

The eighteen men accused in the case are facing a variety of charges ranging from involuntary manslaughter and felony aggravated assault to tampering with evidence.

Prosecutors claim that the brothers waited 12 hours before getting help for Piazza, who died two days after falling down the stairs.

In June, three hours of surveillance tape from inside the home showed fraternity members talking among themselves and trying to dress Piazza before calling authorities, according to State College Police Detective David Scicchitano.

Scicchitano said the video showed that sometime after Piazza's initial fall, fraternity members picked him up and slammed him on his back on a couch.

At one point, some of the members sat on his legs, the detective said, and Piazza was moving around, trying to twist and turn.

Video also showed a seemingly intoxicated Piazza lurching from room to room before his fall.

Scicchitano and the prosecution said that about half an hour after the boy's fall, a group-text-app message was sent to frat members reading, "Tim Piazza might actually be a problem. He fell 15 feet down a flight of stairs, hair first. Going to need help."

Penn State shut down the Beta chapter permanently after an investigation, and the Beta Theta Pi International Fraternity suspended the group. In a June vote, the school's board of trustees agreed to take more control of fraternity discipline, tighten restrictions on social events and push back Greek life recruitment in the wake of Piazza's death.