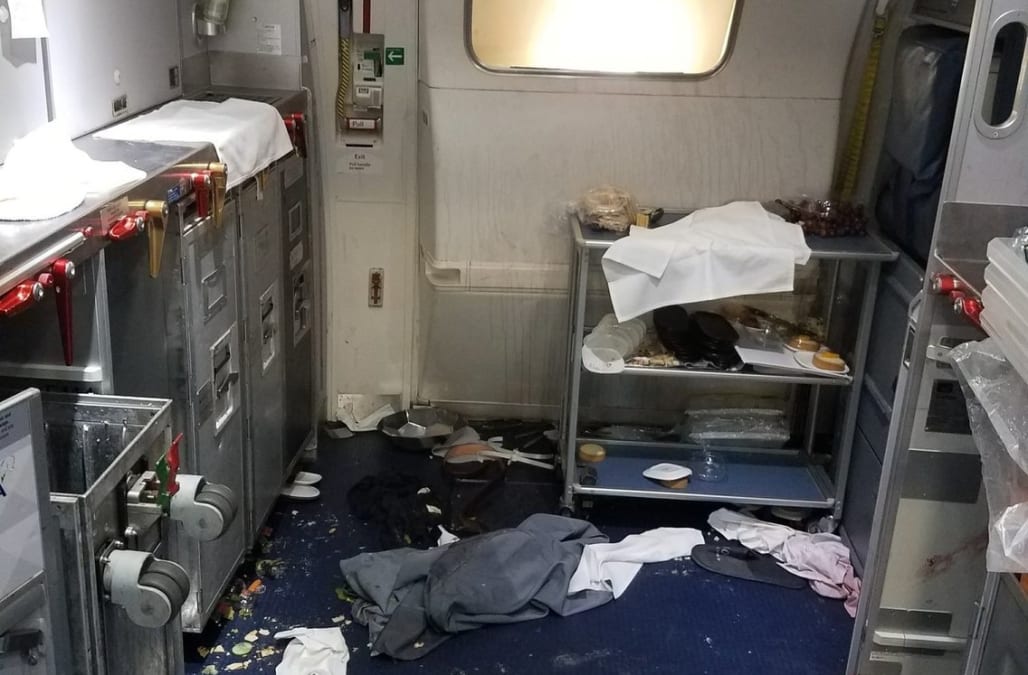 A Florida man who reportedly attacked passengers and crew members on a Delta Airlines flight last week was hit over the head with two bottles of wine in an attempt to prevent him from opening the plane's exit door mid-flight, according to a federal complaint.

Joseph D. Hudek IV, 23, was charged with one count of interference with airline staff on Friday after allegedly assaulting two Delta Airline flight attendants on a Beijing-bound plane.

RELATED: Click through some of the most horrific airline stories

According to an FBI agent's affidavit, Hudek was flying on a dependent pass, which is sometimes offered to relatives of Delta employees, when he ordered one beer while dining in first class.

The in-flight chaos broke out about an hour into the flight, shortly after Hudek went to use the bathroom. He was inside for a few minutes before he exited and "lunged toward the forward right exit door of the aircraft, grabbed the handle" and attempted to pull it open, the complaint alleged.

Two flight attendants grabbed him, but Hudek allegedly pushed them away and proceeded to pull the emergency release lever almost halfway up, the FBI agent wrote.

The event prompted a "Code 3" announcement and the pilot returned the plane to Seattle once Hudek started to punch airline staff and passengers who challenged him in the face before breaking free again and attempting to pry open the door.

That was when a flight attendant grabbed two wine bottles and hit the unruly passenger with both, breaking one of the glass bottles over his head, the FBI agent further wrote.

Hudek allegedly responded by yelling undeterred, "Do you know who I am?"

Fortunately, Hudek was eventually subdued by passengers and crew members and restrained with with zip ties, though he "remained extremely combative, and multiple passengers were needed to restrain Hudek and keep him restrained until the plane landed safely back at Sea-Tac Airport."

Following the brawl on the Delta airline fight, one passenger and one flight attendant were reportedly hospitalized after suffering severe facial injuries.

Hudek recently appeared in US District Court and was charged with interfering with a flight crew later last week.