All eyes are on Justice Anthony Kennedy's retirement plans 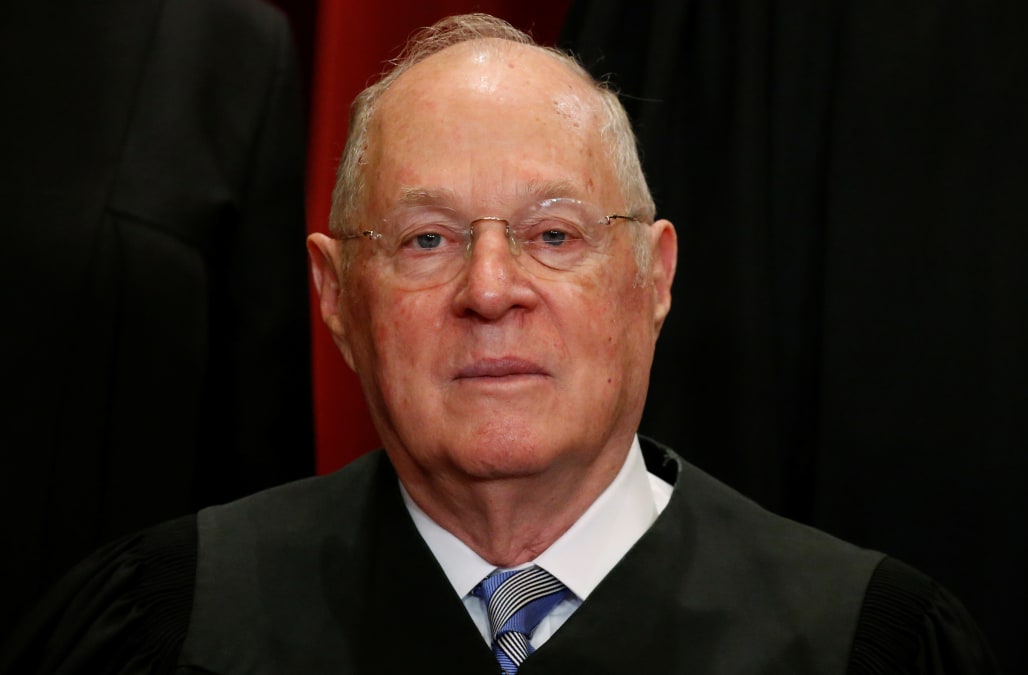 For the left, it was a classic no-news-is-good-news scenario: The Supreme Court adjourned for the summer, and Justice Anthony Kennedy, the conservative jurist who sometimes votes with the court's liberals, didn't announce his retirement, denying President Donald Trump the chance to replace him with a more reliable, hard-right conservative.

Last week, however, Kennedy reportedly dropped a low-key bombshell, hinting to prospective clerks that he's considering stepping down in 2018, ahead of the midterm elections.

The news comes from Nina Totenberg, NPR's venerable Supreme Court reporter, though it hasn't been fully corroborated, and several experts poured cold water on the report. Most believe Kennedy, the court's longest-serving justice, will keep his plans close to his vest.

Nevertheless, the possibility of a Kennedy retirement and second court opening in Trump's short tenure sent a ripple through various circles in Washington, underscoring how Senate Democrats and liberal interest groups lack the political muscle to stop the president and Senate Republicans from reshaping the court -- especially since Kennedy has served as a bulwark against total conservative control of the nation's government.

"I think it would be surprising that Kennedy has told his law clerks anything like that. I think he would announce or not, and not allow it to leak," says Sue Bloch, a constitutional law professor at Georgetown University and a former clerk for Supreme Court Justice John Marshall. "I would not put much stock in" news that he plans to step down next year.

It also shows how closely both sides are watching Kennedy, who turns 81 in July, scouring his every word and scrutinizing all rumors for hints about his future plans. If he decides to leave, Trump would have a historic opportunity Republicans denied his predecessor, President Barack Obama: The opportunity to anchor the court, this time to the right, for decades to come.

"I just don't think that the left has much leverage," Bloch says. "I think they'll try really hard" and put pressure on Trump and Republicans, but "if he announces his departure sometime in 2018, Trump will act as quickly as he can to name someone, and the Senate will act as quickly as it can to confirm a replacement."

That scenario, liberals argue, would do serious harm to the Constitutional system of checks and balances, particularly if Trump returns to the same list of hand-picked conservative jurists from which he nominated Justice Neil Gorsuch.

"The ramifications of a Gorsuch-like conservative textualist replacing a Kennedy swing vote would reverberate for a lifetime, potentially reversing the decisions on some of the biggest issues of our time," including gay marriage, abortion and campaign finance, according to Above the Law, a blog focused on the Supreme Court. "Replacing Justice Kennedy with a far-right nominee in the mold of a Neil Gorsuch would be disastrous for protecting civil and human rights and maintaining checks on the abuse of presidential power."

The spotlight on Kennedy is the result of an historic combination of factors -- the sudden death of Justice Antonin Scalia a year ago, Senate Majority Leader Mitch McConnell's decision to block Obama from filling the seat and Trump's surprise win in the 2016 presidential election.

Though Obama nominated Merrick Garland, a centrist appellate judge, for the job, McConnell and the GOP caucus refused to hold meetings or confirmation hearings, declaring the seat should remain open until after the election.

Democrats and political analysts blasted the unprecedented tactic, which kept Garland from recalibrating the court's three-decade, 5-4 conservative majority. But the GOP's blockade held, Trump won the election, then nominated Gorsuch, a jurist with glittering credentials but a hard-right bent, from the list of 21 judges approved by the Heritage Foundation and The Federalist Society, two conservative think tanks.

The payoff of McConnell's gambit left Republicans with visions dancing in their heads: Three of the nine Supreme Court justices are 80 or older, including liberal Justices Ruth Bader Ginsburg and Stephen Breyer, and odds are their new president will get to pick as many as two or three replacement justices.

With Trump in the White House, and both apparently in good health, Ginsburg and Breyer are staying put for now.

That made Kennedy, the swing jurist, the focus of intense lobbying campaigns. Liberals urged Kennedy, who was appointed by President Ronald Reagan, to stay on, but conservatives, including Trump, publicly suggested he should retire and preserve his legacy.

Bloch, the Georgetown University law professor, says it's impossible to predict what Kennedy will do, and when he might decide to do it.

Marge Baker, executive vice president at People For the American Way, agreed: "We won't know for sure until a resignation is announced, and part of his decision-making may be influenced by the pivotal role he will undoubtedly play during the Court's upcoming term," she says in an email interview.

Although Senate Democrats are outnumbered and can't use the filibuster to block any Trump replacement, Baker thinks liberals have the ability to push Senate Republicans hard enough to keep a strong conservative out of the seat.

"Public pressure on key Republicans could well make a difference on who is nominated to fill the vacancy should Justice Kennedy retire," Baker says.

She explains: "There are no "free" votes for Republicans now that they have eliminated the 60-vote rule for Supreme Court nominations. Each member of the slim GOP majority will be accountable to their voters ... if they are seen as putting in place someone who will vote with the other ultra-conservative justices" to overturn Roe v. Wade or other long-held precedents important to liberals and taken for granted by most Americans..

Caroline Fredrickson, president of the American Constitution Society, predicts that any attempt to put a Gorsuch clone in Kennedy's seat would trigger 'a mass mobilization of people who have concerns over the direction of the country" and underscore threats to "women's reproductive rights, their right to access [healthcare] services, the right of gay and lesbians to marry."

"There are a lot of areas where the law would be completely upended with another super conservative pick," she says. "I don't think the country is ready to go in that direction."

Either way, Bloch says, it's all speculation: Only Kennedy can determine when he's ready to leave the nation's highest court, and he's not talking. Still, there's little doubt that, in the drama over the court's direction, Republicans are in the driver's' seat.

"Timing is everything," she says. "If he steps down this year, then there will be a conservative replacement. I'm not sure he's going to step down. And if he doesn't step down this year, then we have the 2018 election" which -- if, as some have predicted, the GOP loses control of the Senate -- would throw the court's future into chaos.

More from US News:
What Can We Predict About the Future of Donald Trump's Presidency?
A July 4th Warning About President Donald Trump and Nuclear Decisions
Economic Statistics Suggest Immigration Is a Boost to the U.S. Economy