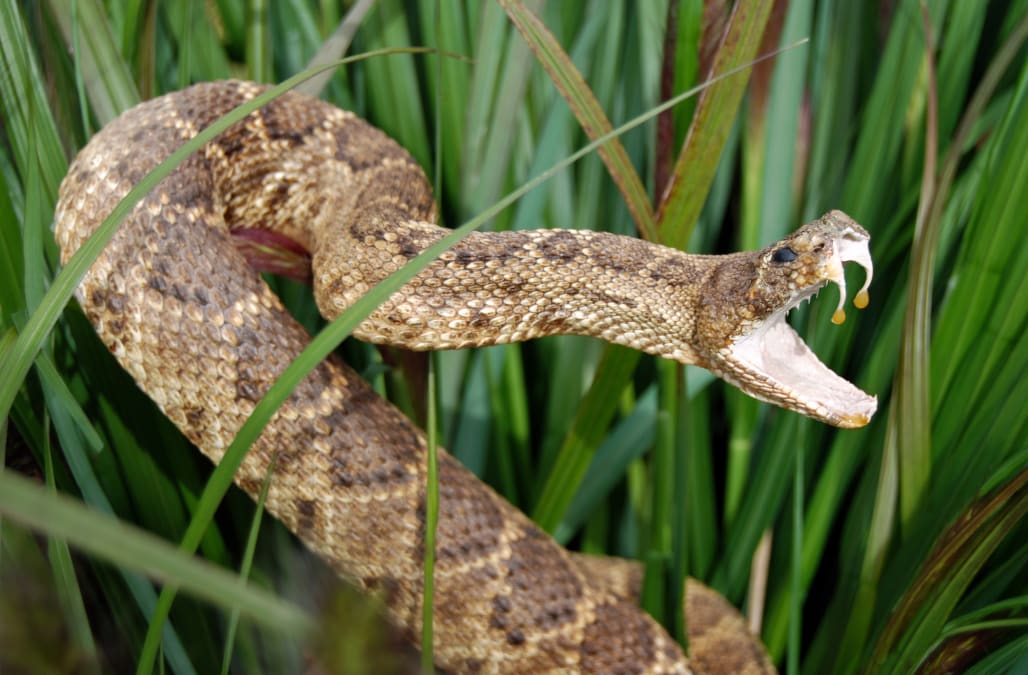 (KTLA) -- A man was arrested, and dozens of reptiles -- including 100 venomous snakes and eight American alligators -- were confiscated after search warrants were served at two Thousand Oaks area properties on Thursday morning, authorities said.

The searches took place at a home in the 1300 block of Rancho Lane and a rural property in the 800 block of Carlisle Road, in an unincorporated part of Ventura County near Thousand Oaks.

The warrants were issued after animal control officials learned that a California Department of Fish and Wildlife Restricted Special Holder possibly violated the conditions of the permit, according to a Los Angeles County Department of Animal Care and Control news release.

"It appears that, despite the multiple levels of permits, approvals, and periodic inspections required, the permit holder was housing deadly venomous snakes in an unauthorized, densely populated, residential neighborhood, and in such a manner that they posed a substantial risk to public safety," the release stated.

An investigation began eight weeks ago, after a resident ran over a venomous cobra on the road with a car, according to Marcia Mayeda of the Los Angeles County Department of Animal Care and Control.

The cobra sighting was the second in the neighborhood in three years, according to the release.

In 2014, a venomous white cobra was captured several days after it bit a dog and was seen wandering through the neighborhood. The snake was eventually sent to the San Diego Zoo, where it went on exhibit a few months later.

The reptiles seized Thursday were at the same home where the albino monocled cobra had escaped three years earlier, Mayeda said at an afternoon news conference.

A search warrant was served at the two properties after the investigation sparked by the second snake sighting. L.A. County Animal Control officials served the warrants, with the assistance of other agencies, according to the release.

"The animals are being removed because they are not allowed to be on this property. We have very strong concerns about public safety, for the public as well as their pets," Mayeda said.

Mayeda noted that approximately 100 venomous snakes, of various species -- including monocled and spitting cobras, and rattlesnakes -- were seized at the two properties. Eighty were discovered at the man's residence, while 20 "highly venomous" snakes were seized at the second location.

"The resident here had permits for a number of venomous species that are supposed to be housed at another secure location, where they would be allowed to be kept," she said.

He was arrested by the Ventura County Sheriff's Office, according to Mayeda. Video from the scene earlier showed a man in handcuffs being escorted away from the property by authorities.

The investigation is still underway, and it was not immediately known what charges would be filed in the case.

Hours after the warrants were served, authorities remained at the both scenes as they continued to collect animals and evidence. Officials would determine later where the animals would go next.

One snake -- a red-bellied black snake -- possibly got out and is believed to be on the loose after it was spotted by a neighbor, according to Mayeda.

She urged anyone who observed a snake in the area to dial 911.