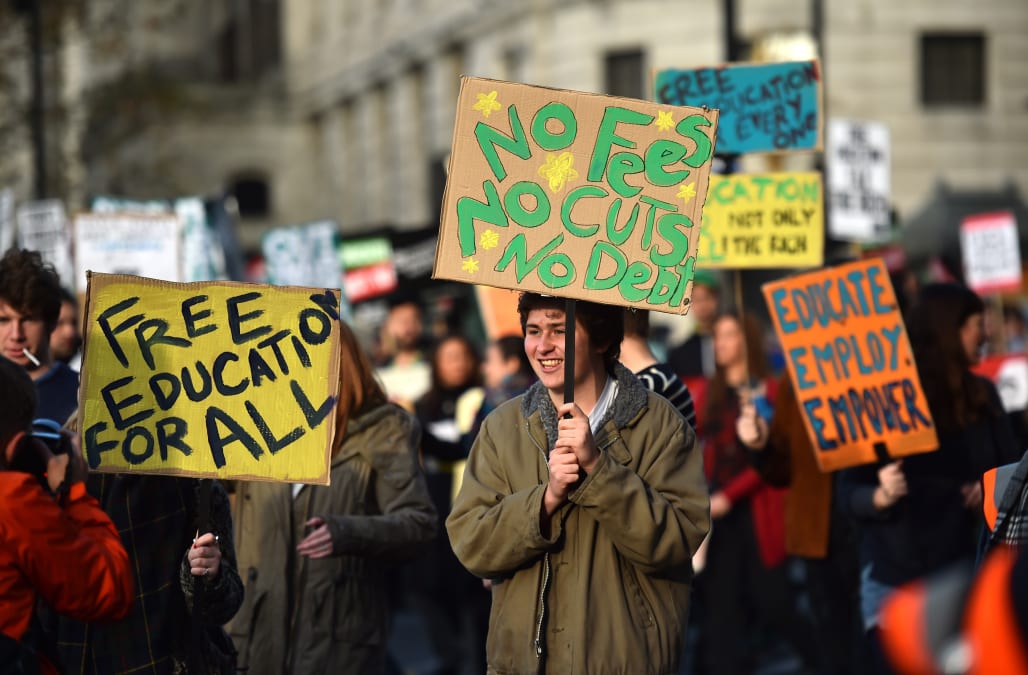 There are many major issues currently facing the United States, and LendEDU, an online marketplace for student loans, recently asked millennials which ones they find the most menacing.

When prompted to pick which problem facing the U.S. is more threatening, North Korea or student loans, just under 70 percent said college debt.

Notably, the survey was conducted between June 2 and June 14, weeks before North Korea announced it had tested an intercontinental ballistic missile capable of reaching the U.S.

Click through the 10 U.S. states with the most debt

The 10 US states with the most debt

Hawaii comes in second with a debt-to-income ratio of 2.1. On average Hawaiians make slightly more than Golden State residents. The median income in Hawaii is $31,905 as compared to $28,068 in California. Residents of Hawaii also have slightly more debt per capita than those in California: $67,010 to $65,740. Hawaiians have the second-highest proportion of debt tied up in mortgage. In total, $51,770 out of the total $67,010 in per capita debt that Hawaiians hold is owed on mortgages. That means 77% of per capita debt is mortgage debt.

Virginia comes in third with a debt-to-income ratio just below 2. The average Virginian makes about $31,557 and has $62,520 in debt. One reason why lenders may feel safe lending to Virginians, allowing them to have a high debt-to-income ratio, is their low delinquency rates. Only 1.27% of mortgage debt in Virginia is delinquent by at least 90 days. That is the 13th-lowest rate in the country. Virginia also has a relatively high proportion of its debt in student loans (7.76%).

Of Colorado’s total debt, 6.85% is tied up in automobile debt. That’s the second-highest rate in the top 10. However it is quite a bit lower than the national average of 9.57%. Overall there is not much separating Colorado from Virginia: Colorado has a debt-to-income ratio of 1.96. The median income in Colorado is $31,664 and the per capita debt is $62,200.

Almost 15% of all debt held in the nation’s capital is owed on student loan debt. All that higher education may be paying off though. D.C. has the highest median income in the country and over half of the population over the age of 25 has at least a bachelor’s degree. In fact, there are more people over the age of 25 in D.C. with a graduate degree (32.3%) than there are with only a bachelor’s degree (23.8%). The capital also has the lowest percent of debt in the country tied up in auto loans (3.35%), probably due to the accessible public transportation available in the area.

Oregon has a debt-to-income ratio of 1.89. On average Oregonians make less than many other states in the top 10. The median income in the Beaver State is $26,188, according the U.S. Census Bureau. Oregon also has the least per capita debt in the top 10, at $49,550 per resident. For the most part Oregonians choose to go into debt to buy homes. Over 72% of overall debt is held in mortgages. One area where Oregonians struggle is in paying off credit card debt. Just over 7% of all credit card debt in the state is delinquent. One way to eliminate credit card debt is using a balance transfer credit card. With a balance transfer credit card, new users typically have a limited time to make no-interest payments.

Washington, Oregon’s northwest neighbor, comes in eighth for highest debt-to-income ratio. The state has the third-lowest percent of debt tied up in student loans (6.29%) but the third-highest percent of debt tied up in mortgages (75.35%). Washingtonians also tend to be some of the most responsible holders of debt in the country. They rank above average in delinquency rates on all types of debt and rank in the top 10 for lowest rates of auto loan delinquency and credit card delinquency.

On average Massachusetts residents earn about $32,352 per year and have about $59,820 in debt per capita. That works out to a debt-to-income ratio of 1.84. Once again, like other states, the majority of that debt is mortgage debt. About 72% of per capita debt in the Bay State is mortgage debt. The state’s residents don’t take on as much credit card debt as other states do. About 5.45% of per capita is tied up in credit card debt.

Prior to the survey, it had performed numerous trials of smaller missiles and threatened to reduce U.S. troops in South Korea "to ashes."

As for student loans, the collective educational loan total among the roughly 43.3 million borrowers stands at $1.41 trillion.

On average, people borrow about $28,400 and 11.8 percent of loan recipients go into default.

According to LendEDU, "the $1.41 trillion in outstanding student loan debt is still a ways off from the $10.6 trillion in mortgage debt during the peak of the Great Recession. However, student debt in the U.S. is now the second largest class of debt, above credit cards."

For as much concern as millennials have about their student debt, there are problems they see as being much more serious, though, admittedly, not by a significant degree.

For example, LendEDU notes that "Millennials were nearly split down the middle in terms of deciding if global warming or the student loan crisis is the biggest problem facing the U.S."

Over 51 percent said global warming is definitely a bigger deal.