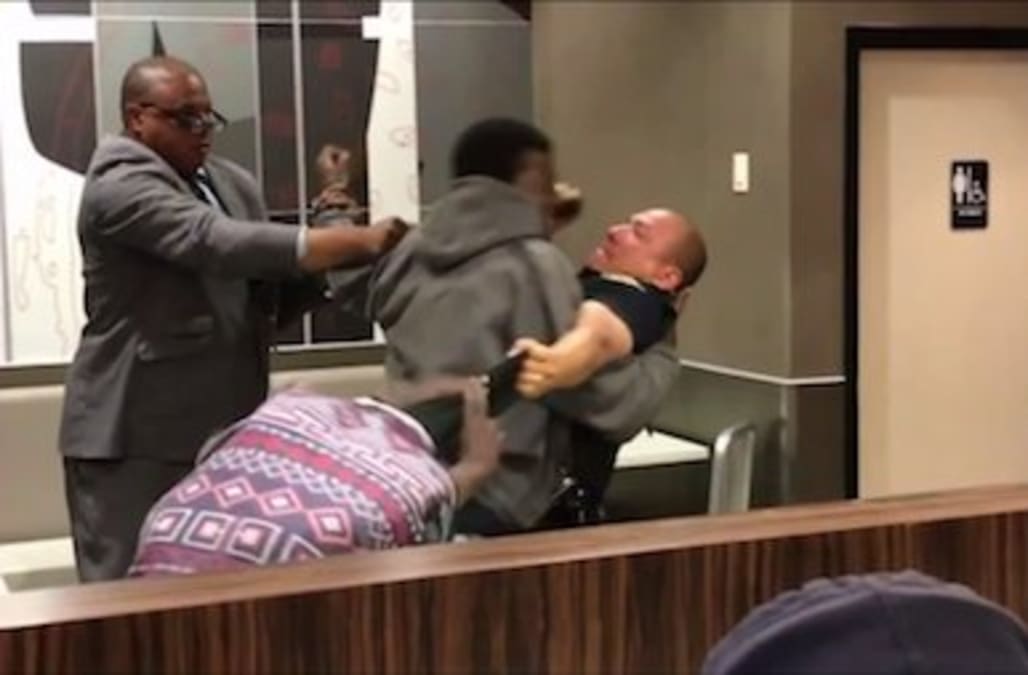 Two men and a security guard were caught on camera fighting in a Santa Monica McDonald's fast food restaurant after the guard noticed the men were sleeping and asked them to leave, police said.

The request spiraled into a brawl at the 24-hour eatery on Second Street and Colorado Avenue around 4:30 a.m., said Lt. Saul Rodriguez with the Santa Monica Police Department.

The security guard approached the men, who appeared homeless, when he noticed they were using the location to sleep, according to Rodriguez.

"It didn't appear they had bought any food and he asked them if they could leave," he said. "That, in turn, led to an argument that ensued into, basically a fight and a struggle ... that is on video."

The witness who captured the video, who did not want to be identified, told KTLA the situation got truly violent after the guard pepper sprayed one of the assailants in the face.

"That escalated the situation," he said. "They started throwing punches at it was, as you can see in the video, a total melee."

Video shows the restaurant's patrons attempted to intervene on behalf of the security guard and break up the melee. At one point, a bystander can be seen throwing a chair at one of the alleged attackers.

SEE ALSO: Footage captures brawl erupt between parents in church as kids walk down the aisle at graduation

One of the two men who initiated the melee grabbed the guard's baton and has been arrested on suspicion of assault with a deadly weapon, Rodriguez said.

The security guard suffered bruising but was expected to be OK, according to police.

Anthony Lardas, the owner of the McDonald's franchise, said providing a safe environment for customers and employees was of utmost importance, but declined to comment further citing the ongoing investigation.

More from AOL.com:
Inmate at Ohio jail unlocks another prisoner's cell door with comb
Study reveals Louisiana has the highest homicide rate by gun
Man dragging dead raccoon shot, run over after driver mistakes it for a dog