US prepared to use force on North Korea 'if we must': UN envoy 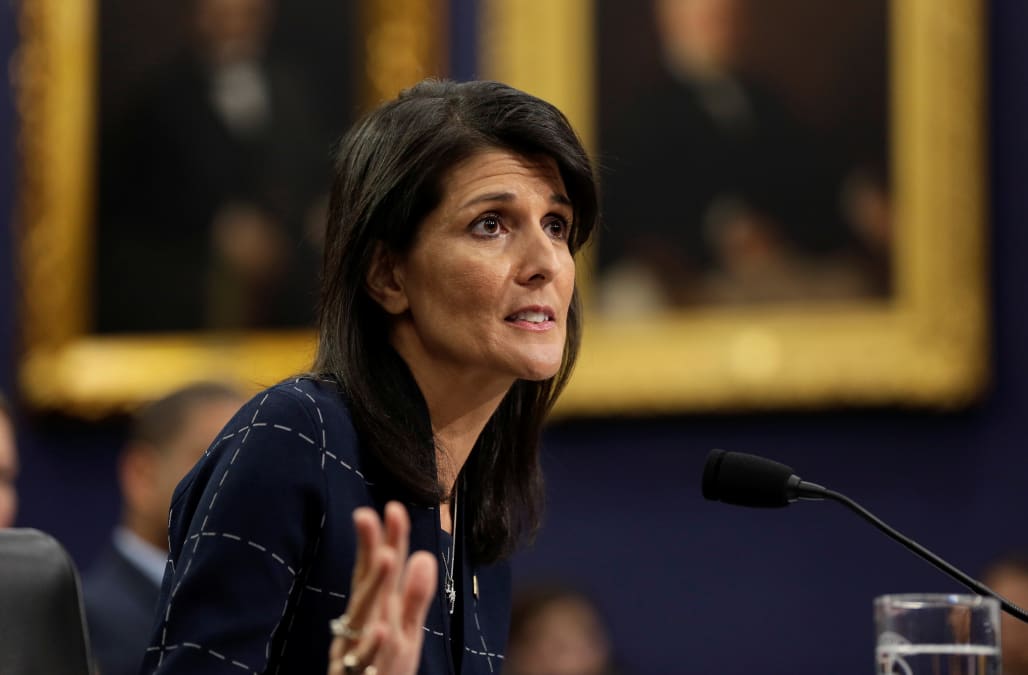 UNITED NATIONS, July 5 (Reuters) - The United States cautioned on Wednesday it was ready to use force if need be to stop North Korea's nuclear missile program but said it preferred global diplomatic action against Pyongyang for defying world powers by test launching a ballistic missile that could hit Alaska.

U.S. Ambassador to the United Nations Nikki Haley told a meeting of the U.N. Security Council that North Korea's actions were "quickly closing off the possibility of a diplomatic solution" and the United States was prepared to defend itself and its allies.

Nikki Haley through the years
Nikki Haley Just Defended Donald Trump as a Paragon of Truth and Virtue on National Television
Nikki Haley insists Donald Trump is 'truthful' as she returns to spotlight
FILE-In this Monday, Nov. 26, 2018 file photo, United States Ambassador to the United Nations Nikki Haley speaks during a security council meeting about the escalating tensions between the Ukraine and Russia at United Nations headquarters. Haley is moving back to her native South Carolina, re-establishing a home base and also fueling speculation that a return to politics is next on her to-do list. The 47-year-old former South Carolina governor, who left office in 2017 to join the Trump administration, closed Friday, Sept. 20, 2019 on a home on Kiawah Island, according to Alex Malloy, a spokeswoman for Kiawah Island Real Estate.(AP Photo/Seth Wenig, File)
Former Ambassador to the U.N Nikki Haley speaks at the 2019 American Israel Public Affairs Committee (AIPAC) policy conference, at Washington Convention Center, in Washington, Monday, March 25, 2019. (AP Photo/Jose Luis Magana)
Nikki Haley headshot, former US Ambassador to the United Nations, graphic element on gray

Former South Carolina Governor Nikki Haley testifies before a Senate Foreign Relations Committee confirmation hearing on her nomination to be to U.S. ambassador to the United Nations at Capitol Hill in Washington, U.S., January 18, 2017.

South Carolina Gov. Nikki Haley, nominee to be the US ambassador to the United Nations, walks through the Capitol to the Senate subway on Thursday, Jan. 12, 2017.

Delegates pose for pictures with South Carolina Governor Nikki Haley (C) on the floor during the third session of the Republican National Convention in Cleveland, Ohio, U.S. July 20, 2016.

Escorted by staff and security, South Carolina Governor Nikki Haley (C) moves from one television interview to another across from the historic Emanuel African Methodist Episcopal Church June 19, 2015 in Charleston, South Carolina. Haley called for the death penalty for Dylann Storm Roof, 21, of Lexington, South Carolina, if he is found guilty of murdering nine people during a prayer meeting at the church Wednesday night. Among the dead is the Rev. Clementa Pinckney, the pastor of the church which, according to the National Park Service, is the oldest black congregation in America south of Baltimore.

South Carolina Gov. Nikki Haley, right, greets U.S. Sen. Tim Scott, R-SC, at the first church service four days after a mass shooting that claimed the lives of nine people at the historic Emanuel African Methodist Church June 21, 2015 in Charleston, South Carolina. Chruch elders decided to hold the regularly scheduled Sunday school and worship service as they continue to grieve the shooting death of nine of its members including its pastor earlier this week.

Escorted by staff and security, South Carolina Governor Nikki Haley (C) moves from one television interview to another across from the historic Emanuel African Methodist Episcopal Church June 19, 2015 in Charleston, South Carolina. Haley called for the death penalty for Dylann Storm Roof, 21, of Lexington, South Carolina, if he is found guilty of murdering nine people during a prayer meeting at the church Wednesday night. Among the dead is the Rev. Clementa Pinckney, the pastor of the church which, according to the National Park Service, is the oldest black congregation in America south of Baltimore.

South Carolina Governor Nikki Haley holds a news conference with fellow members of the Republican Governors Association at the U.S. Chamber of Commerce February 23, 2015 in Washington, DC. Republican and Democratic governors met with U.S. President Barack Obama at the White House Monday during the last day of the National Governors Association winter meeting.

South Carolina Gov. Nikki Haley waves on stage during the Republican National Convention at the Tampa Bay Times Forum on August 28, 2012 in Tampa, Florida. Today is the first full session of the RNC after the start was delayed due to Tropical Storm Isaac.

Former Florida Governor and potential GOP presidential candidate Jeb Bush walks with South Carolina Governor Nikki Haley during a visit to Sistercare, a non-profit that aids domestic violence victims and their children on March 17, 2015 in Columbia, South Carolina. Bush announced in December that he 'actively explore' a presidential run in 2016. He is currently on a two day tour through South Carolina and will attend several fundraising events.

Nikki Haley applauds the Claflin College Choir after their performance during her inauguration as governor of South Carolina, Wednesday, January 12, 2011, in Columbia, South Carolina.

South Carolina Gov. Nikki Haley speaks to the media prior to the NASCAR Sprint Cup Series Bojangles' Southern 500 at Darlington Raceway on May 12, 2012 in Darlington, South Carolina.

Nikki Haley speaks to supporters as she comes onto stage during an election party for Republican South Carolina Governor candidate Nikki Haley at the State Museum on June 22, 2010 in Columbia, South Carolina. Haley defeated Rep. Gresham Barrett in a runoff election.

"One of our capabilities lies with our considerable military forces. We will use them if we must, but we prefer not to have to go in that direction," Haley said. She urged China, North Korea's only major ally, to do more to rein in Pyongyang.

Taking a major step in its missile program, North Korea on Tuesday test launched an intercontinental ballistic missile that some experts believe has the range to reach the U.S. states of Alaska and Hawaii and perhaps the U.S. Pacific Northwest.

The missile test is a direct challenge to U.S. President Donald Trump, who has vowed to prevent North Korea from being able to hit the United States with a nuclear missile.

He has frequently urged China to press the isolated country's leadership to give up its nuclear program.

Haley said the United States would propose new U.N. sanctions on North Korea in coming days and warned that if Russia and China did not support the move, then "we will go our own path."

She did not give details on what sanctions would be proposed, but outlined possible options.

"The international community can cut off the major sources of hard currency to the North Korean regime. We can restrict the flow of oil to their military and their weapons programs. We can increase air and maritime restrictions. We can hold senior regime officials accountable," Haley said.

Diplomats say Beijing has not been fully enforcing existing international sanctions on its neighbor and has resisted tougher measures, such as an oil embargo, bans on the North Korean airline and guest workers, and measures against Chinese banks and other firms doing business with the North.

"Much of the burden of enforcing U.N. sanctions rests with China," Haley said.

The United States might seek to take unilateral action and sanction more Chinese companies that do business with North Korea, especially banks, U.S. officials have said.

China's U.N. ambassador, Liu Jieyi, told the Security Council meeting that the missile launch was a "flagrant violation" of U.N. resolutions and "unacceptable."

"We call on all the parties concerned to exercise restraint, avoid provocative actions and belligerent rhetoric, demonstrate the will for unconditional dialog and work actively together to defuse the tension," Liu said.

The United States has remained technically at war with North Korea since the 1950-53 Korean conflict ended in an armistice rather than a peace treaty and the past six decades have been punctuated by periodic rises in antagonism and rhetoric that have always stopped short of a resumption of active hostilities.

Pyongyang will not negotiate with the United States to give up those weapons until Washington abandons its hostile policy against the North, KCNA quoted Kim as saying.

"He, with a broad smile on his face, told officials, scientists and technicians that the U.S. would be displeased ... as it was given a 'package of gifts' on its 'Independence Day,'" KCNA said, referring to the missile launch on July 4.

Trump and other leaders from the Group of 20 nations meeting in Germany this week are due to discuss steps to rein in North Korea's weapons program, which it has pursued in defiance of Security Council sanctions.

Russia's deputy U.N. envoy said on Wednesday that military force should not be considered against North Korea and called for a halt to the deployment of a U.S. missile defense system in South Korea.

He also said that attempts to strangle North Korea economically were "unacceptable" and that sanctions would not resolve the issue.

The U.S. military assured Americans that it was capable of defending the United States against a North Korean ICBM.

"So we do have confidence in our ability to defend against the limited threat, the nascent threat that is there," he told reporters. He acknowledged though that previous U.S. missile defense tests had shown "mixed results."

It would now probably only be a year or two before a North Korean ICBM achieved "minimal operational capability," he added.

Schilling said the U.S. national missile defense system was "only minimally operational" and would take more than two years to upgrade to provide more reliable defense.