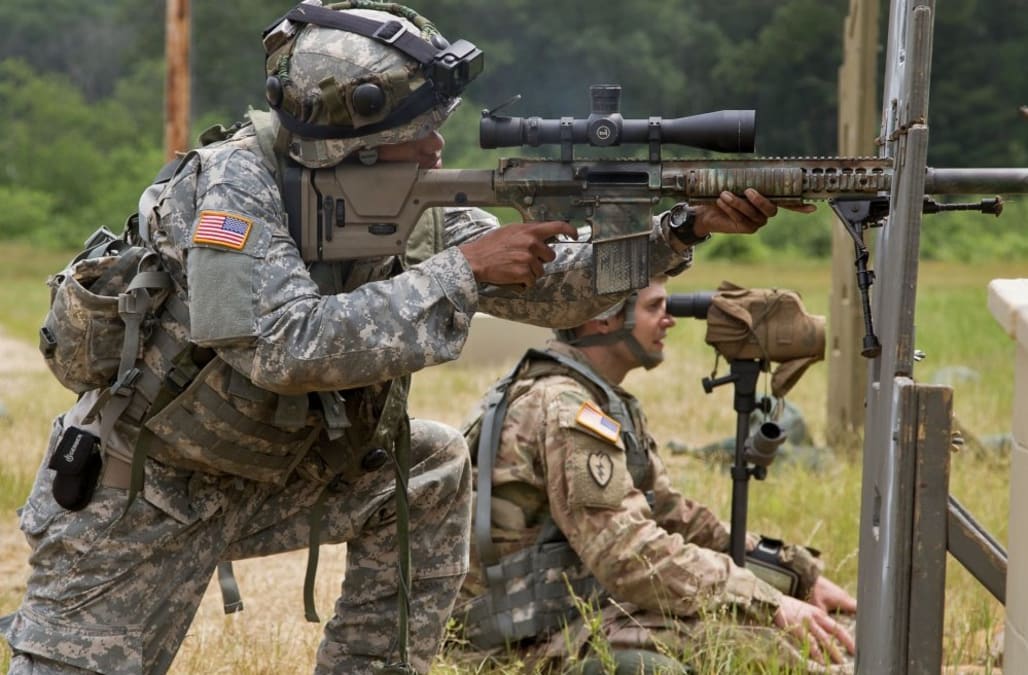 During large, multiunit exercises, the US military's snipers can be overshadowed by the men and machines roving the battlefield.

To correct that, Staff Sgt. Joe Bastian — a former active-duty sniper who is now a sniper observer/controller/trainer with the First Army's 1st Battalion, 335th Infantry Regiment — designed a special 10-day training course for snipers during the 33rd Infantry Brigade's Exportable Combat Training Capability, or XCTC, at Fort McCoy in Wisconsin.

"The course is designed to get all of the snipers from the brigade together to train, broaden their horizons and share tactics, techniques and procedures," he said in an Army news story.

Bastian called on two former instructors from the US Army's Sniper School at Fort Benning in Georgia, and their course filled the 10-day exercise with weeks' worth of training for soldiers from Illinois' 33rd Infantry Brigade Combat Team and Puerto Rico's 1st Battalion, 296th Infantry Regiment.

The course teaches snipers how to design their own training courses, as well as how to work with ammunition, targets, and ranges, and how to use camouflage and stalking techniques during training.

Below, you can see some photos of US Army National Guard snipers getting the specialized instruction they need to seek out and pick off their targets.

XCTC is the Army National Guard’s program to provide an experience similar to an Army combat-training center at a home station or a regional training center, like Fort McCoy. Soldiers from the 502 Infantry Regiment stood in as opposition forces.

Soldiers with the 2nd Battalion, 502nd Infantry Regiment of Fort Campbell, Kentucky, move to a new location for a training scenario during the XCTC Exercise on June 9, 2017, at Fort McCoy, Wisconsin.

"I had to call in a couple of favors because of the scope of this course," Bastian said. "My two co-trainers bring a breadth of knowledge and experience that is unparalleled and gives these soldiers an opportunity that they won't get otherwise."

Tarrol Peterson, a US Army Sniper Association instructor and former instructor at the US Army's Sniper School at Fort Benning, Georgia, and Bastian look for snipers during the stalking portion of the 10-day sniper training course.

"The Army has a multitude of systems and professionals to continually train everyone, except snipers," Peterson, one of the co-trainers, said. "When these guys go back to their units, there's not a lot of personnel that can train them properly. This course will help them continue their education and properly train themselves."

A soldier from the Illinois National Guard prepares a weapon for gunnery training on June 9, 2017, at Fort McCoy.

SEE ALSO: The US military is struggling to keep up with all its responsibilities