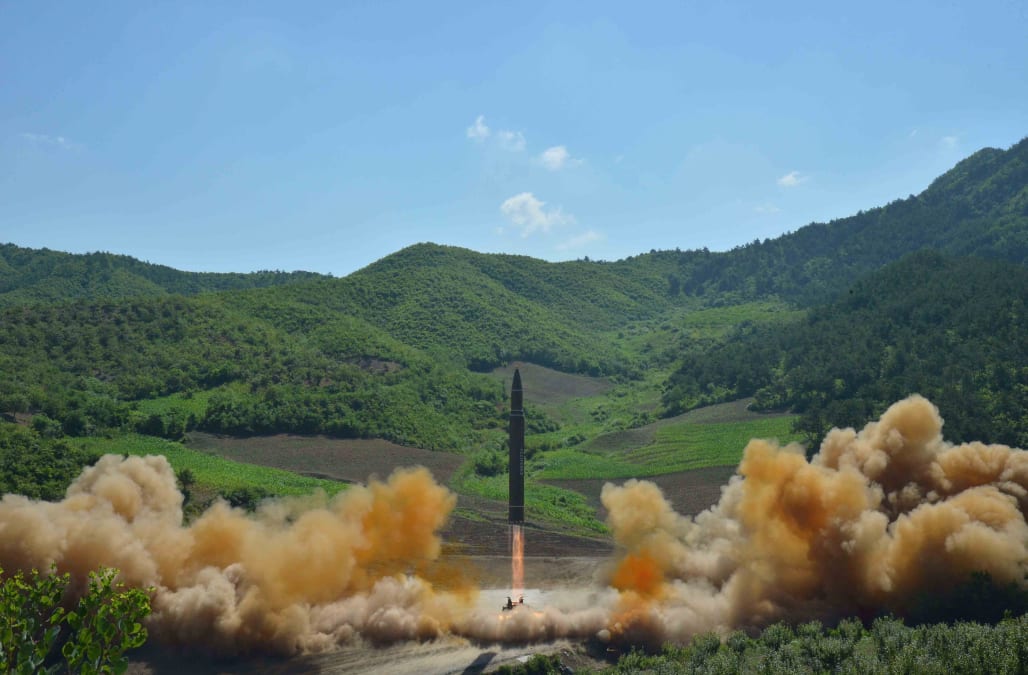 The United States condemned the test-launch, firing warning missiles and vowing to hold the regime accountable at the United Nations.

The ICBM, which is believed to be "two-stage," officials said, would have a range of at least 3,500 miles and thus be able to reach Alaska.

The North Korean regime earlier Tuesday claimed that it successfully fired a long-range missile into the Sea of Japan, declaring itself a "proud nuclear state."

"It is a major celebration in our history," said an announcer on North Korean state television. North Korea "is now a proud nuclear state, which possesses [an] almighty ICBM rocket that can now target anywhere in the world."

The Hwasong-14 hit its target precisely after flying for 39 minutes, state television said.

In response, the United States and South Korea fired missiles into South Korea's territorial waters off the east coast, the Seoul-based Eighth U.S. Army said — moves that could be seen as a warning message to the regime.

"North Korea's serious provocation calls for responding more than just by statement alone," President Moon Jae-in said, according to Yoon Young Chan, a spokesman. "We need to clearly show to North Korea our combined forces in total readiness to respond to missiles."

Russia and China proposed that North Korea declare a moratorium on nuclear and missile tests while the United States and South Korea refrain from large-scale military exercises. The call was issued in a joint statement Tuesday after talks between Russian President Vladimir Putin and Chines President Xi Jinping.

U.S. President Donald Trump tweeted an apparent reference to North Korean leader Kim Jong Un, asking: "Does this guy have anything better to do with his life?"

Trump suggested that the launch could lead China to "put a heavy move on North Korea and end this nonsense once and for all!"

North Korea has just launched another missile. Does this guy have anything better to do with his life? Hard to believe that South Korea.....

....and Japan will put up with this much longer. Perhaps China will put a heavy move on North Korea and end this nonsense once and for all!

Spending my 4th in meetings all day. #ThanksNorthKorea

Although North Korea is barred under a U.N. resolution from firing ballistic missiles, it routinely does so, saying its arsenal is a necessary tool to defend itself from the United States. The country has conducted five nuclear weapons tests since 2006, with two last year alone.

U.S. Pacific Command in Hawaii said it detected what it assessed as an intermediate-range ballistic missile (IRBM) near North Korea's Panghyon Airfield. The missile landed inside Japan's maritime economic area, just outside its territorial boundary.

IRBMs have a range of up to about 3,400 miles, according to the U.S. Missile Defense Agency. ICBMs, meanwhile, can travel further, although varying performance means there can be a significant overlap between the two.

David Wright, co-director of the Union of Concerned Scientists' Global Security Program, wrote in a blog update that the missile "would need to fly on a very highly lofted trajectory to have such a long flight time" and could have a possible maximum range of 4,160 miles — far enough to reach Alaska.

The Japanese government's main spokesman, Chief Cabinet Secretary Yoshihide Suga, told reporters that there were no immediate reports of damage to planes or ships in the area where the missile hit the water.

Joseph Dempsey, a defense specialist and long-term observer of North Korea at the International Institute for Strategic Studies in London, said the launch was a clear sign that Pyongyang's weapons program was advancing.

"Is it an IRBM or ICBM? Regardless of the distinction, this is the longest-range subsystem they have successfully tested to date," he said. "That indicates they're making progress."

He added that the timing, on the Fourth of July, was "symbolic."

"It's worth bearing in mind that Trump tweeted on Jan. 2 about North Korea developing a nuclear weapon capable of reaching parts of the U.S., saying: 'It won't happen.' Well, this is a continuation of North Korea doing what it said it would do," Dempsey said.

"We're on course to see more," he added. "They would have worked on those for a number of years. They've had failures, but the trajectory is there."

The test comes days before the leaders of the world's major economies, the G-20, are due to meet and discuss ways to rein in Pyongyang's weapons program, which the North has pursued in defiance of U.N. Security Council and unilateral U.S. and South Korean sanctions.

And it comes three months after the regime showed off its military might in a massive public parade. That latest test launch could explain what was in canisters seen during the April 17 event.

"North Korea has declared itself a true nuclear state, and it looks like Kim Jong Un is not going to give up on nuclear power now," he told NBC News. "We now seem to have entered the beginning of the end-game."

He said China faces a "dilemma" in how to respond to Pyongyang's latest action.

"China is probably feeling the most humiliated of any country at this moment, as this is like a confirmation that China has no influence over North Korea," he said.

Beijing could force North Korea to the negotiating table by cutting off oil supplies, Koh added, "but China is afraid of North Korea collapsing, and they are not likely to choose that option."

In a joint appearance with Moon on Friday, Trump recalled the death of Otto Warmbier,22, an American student, who had been imprisoned in North Korea and died shortly after being returned unconscious to the United States.

"The era of strategic patience with the North Korean regime has failed," Trump said alongside Moon.