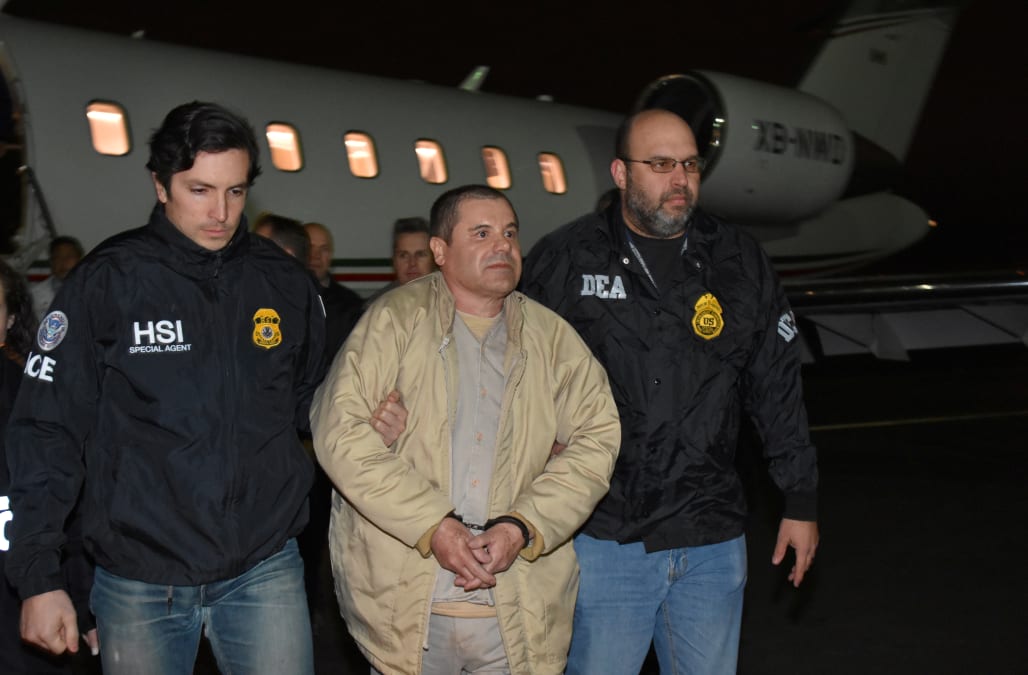 Sinaloa cartel kingpin Joaquin "El Chapo" Guzman was extradited to the US on January 19 and has occupied a cell in a high-security facility in Manhattan ever since, awaiting his trial in April 2018.

As Guzman stews in his cell, largely isolated from the outside world, the cartel he guided to the top of Mexico's narco hierarchy has seen its power and reach erode, according to Mexican government data.

No Mexican criminal organization has spread as far as the Sinaloa cartel or been as successful at resisting government efforts to bring it down.

At its most powerful, it was thought to have had influence in 24 of Mexico's 32 states and reportedly had operations in up to 50 countries.

At the time of Guzman's capture in January 2016 — the third time he was arrested, after his second jailbreak — the cartel was present in 11 states, according to Animal Politico, citing data from the Mexican attorney general's office.

In the year and a half since, that presence has shrunk to seven states. The cartel has lost territory in Colima, Nayarit, and Jalisco states on the Pacific coast as well as in the state of Yucatan on Mexico's Caribbean coast. The Sinaloa cartel functions more like a federation of allied groups rather than a traditionally hierarchical cartel. Those groups often specialize in specific areas of the drug trade, with Guzman and some of his close associates in leadership positions, often refereeing disputes. But since 2015, the Sinaloa cartel has also seen the number of criminal groups partnered with it fall from 10 to seven, according to Animal Politico.

The territory the Sinaloa cartel has lost on the Pacific coast has largely been taken over by the Jalisco New Generation cartel. The CJNG is a relative newcomer among Mexican cartels. It emerged from a split within a faction of the Sinaloa cartel led by the uncle of Guzman's current wife after he was killed in 2010.

The CJNG has used a mix of brutality, financial cunning, and corruption to speed its rise, turning against the Sinaloa cartel after Guzman's capture in February 2014. After its initial expansion east into the state Veracruz (a faction of the cartel called Los Mata Zetas, or the Zetas killers, is thought to have executed 35 members of the Zetas cartel there in 2011), the CJNG has moved north, sparking violence and increased homicide levels in states like Guerrero, Colima, Baja California.

The fight for influence between the CJNG and elements of the Sinaloa cartel has been exacerbated by the battle for succession within Sinaloa.

Since Guzman's 2016 arrest, several factions have been vying to assume command, including one led by Guzman's former right-hand man, Damaso Lopez Nuñez, and another helmed by Guzman's sons, nicknamed Los Chapitos. (Lopez was captured in Mexico City in May.)

Guzman's mother came under attack last summer in a Beltran Leyva-led assault on Guzman's hometown in Sinaloa state. His sons have also come under fire. Two of them were kidnapped in Jalisco state in August, reportedly at the behest of the CJNG and Lopez, and they say Lopez led a near fatal ambush on them in Sinaloa in February. Some of the most intense violence related to this feud has taken place in Sinaloa state, where the CJNG and remnants of the Beltran Leyva Organization, a one-time Sinaloa partner that went to war with Guzman in the 2000s, have joined with factions of the Sinaloa cartel to fight for control of the organization Guzman left behind.

The hours between June 30 and July 1 appear to have been some of the most deadly in the state in years. At least 30 people were killed in different locations in the state over that period, though some reports put the total around 35.

The violence started on Friday night, when gunmen arrived a community near Mazatlan, in southwest Sinaloa, where they attempted to kidnap a local man, killing two or three people in the process.

Local police were alerted to the incident, and military and federal forces arrived soon in support. The resulting clash on a nearby high left 17 gunmen dead and five police wounded.

Authorities called the confrontation one of the fiercest the state has seen in recent months, and Sinaloa's state-security secretary attributed the initial incident to a dispute between local traffickers.

On Saturday, a man and a woman — and by some accounts a child — were reportedly gunned down with assault rifles in a car near Culiacan, the state capital.

That was followed by gunmen entering a private clinic in the city and killing a patient. Other bodies — some with signs of torture — were found throughout the day in Culiacan and the nearby city of Navolato.

According to the state prosecutor, Sinaloa had 182 homicides in June, the second most in a month this year after May's 184, pushing the state's total to 907 homicides this year. If that holds through the end of July, when official homicide data is released, it would be a roughly 73% increase over the 524 homicides during the same period last year.

Local authorities have been overwhelmed and are not equipped to deal with the rising violence.

"It's terror. The word for what is happening in Sinaloa is generalized terror," Alejandro Sicairos, editor of local magazine Espejo, told AFP in June. "This hasn't been the usual kind of shootout. They're coming with everything they've got: high-caliber weapons, full arsenals, vehicle-mounted artillery."