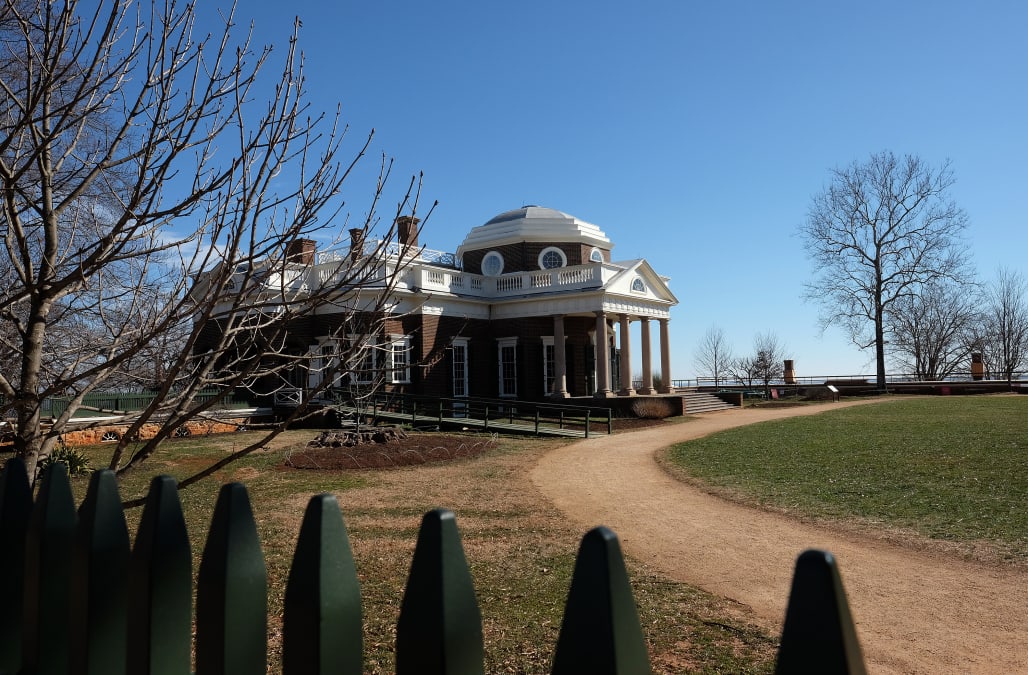 Lost in time, archeologists excavated a special space at Jefferson's Monticello mansion that astounded even the most experienced social scientists: The living quarters of Sally Hemings, the enslaved mistress of Thomas Jefferson who historians believe gave birth to six of Jefferson's children.

"This discovery gives us a sense of how enslaved people were living. Some of Sally's children may have been born in this room," Hallock told NBCBLK. "It's important because it shows Sally as a human being — a mother, daughter, and sister — and brings out the relationships in her life."

Hemings' living quarters was adjacent to Jefferson's bedroom but she remains something of an enigma: there are only four known descriptions of her. Enslaved blacksmith Isaac Granger Jefferson recalled that Hemings was "mighty near white . . . very handsome, long straight hair down her back."

Her room — 14 foot, 8 inch-by-13 foot — went unnoticed for decades. The space was converted into a men's bathroom in 1941, considered by some as the final insult to Hemings' legacy.

See images of the living space:

"For the first time at Monticello we have a physical space dedicated to Sally Hemings and her life," Mia Magruder Dammann, a spokeswoman for Monticello, told NBCBLK. "It's significant because it connects the entire African American arch at Monticello."

By the late 1960s, Magruder said, the earlier bathrooms had become too small to accommodate Monticello's growing number of visitors so local restoration architect Floyd Johnson renovated and enlarged the bathrooms in 1967.

But recently, historians relied on a description provided long ago by a grandson of Jefferson who placed Hemings' room in the home's South Wing.

Fraser Neiman, Director of Archaeology at Monticello, said Hemings' quarters revealed the original brick, original hearth and fireplace, the brick structure for a stove and the original floors from the early 1800s.

"This room is a real connection to the past," Neiman told NBCBLK. "We are uncovering and discovering and we're finding many, many artifacts."

The Mountaintop Project is a multi-year, $35 million effort to restore Monticello as Jefferson knew it, and to tell the stories of the people—enslaved and free—who lived and worked on the 5,000-acre Virginia plantation.

In an effort to bring transparency to the grounds' difficult past, there are tours that focus solely on the experiences of the enslaved people who lived and labored there, as well as a Hemings Family tour.

Monticello unveiled the restoration of Mulberry Row in 2015, which includes the re-creation of two slave-related buildings, the "storehouse for iron" and the Hemmings cabin. In May 2015, more than 100 descendants of enslaved families participated in a tree-planting ceremony to commemorate the new buildings.

White first learned of her Jefferson family lineage as a young girl and years later, she still ponders the emotional complexities associated with Jefferson, the third President of the United States, the author of the Declaration of Independence – and an unapologetic proprietor who enslaved 600 people.

"As an African American descendant, I have mixed feelings—Thomas Jefferson was a slave holder," White told NBCBLK.

"I am appreciative of the work that my colleagues are doing at Monticello because this is an American story, an important story," she said. "But for too long our history has been ignored. Some people still don't want to admit that the Civil War was fought over slavery. We need to face history head-on and face the blemish of slavery and that's what we're doing at Monticello."

White took the job at Monticello in July, 2016 and says her role is to help build a bridge between Monticello and the local community.

"We have a great story on the mountaintop, an inclusive story," White said. "We're telling a complete story. We're not just talking about Thomas Jefferson and his family, we're talking about the enslaved people and their families, too."

Last year, Monticello, along with the National Endowment for the Humanities and the University of Virginia, hosted a public race summit entitled, Memory, Mourning, Mobilization: Legacies of Slavery and Freedom in America. It featured leading academics like Dr. Henry Louis Gates, Jr. and Annette Gordon-Reed, artists like Nikki Giovanni, activists like Bree Newsome, descendants of Monticello's enslaved families and community members.

White said the local African American community has not always embraced Monticello because Jefferson was a slave owner.

"I find that some people are receptive to the message and some are resistant," White said. "But our message is that we want the underserved communities and communities of color to become partners with us. Anecdotally, we have seen an uptick in African Americans visiting Monticello so I know we're making progress."

On a sunny weekday this spring, Monticello tour guide Tom Nash spoke to a group of white tourists and shared stories about slavery on the sprawling Jefferson plantation.

"This is a spectacular view from this mountaintop," Nash said. "But not for the enslaved people who worked these fields. This was a tough job and some of them – even young boys 10 to 16 years old—felt the whip."

Questions for Nash from tourists were wide-ranging:

Why did some slaves want to pass for white when they were freed?

Why did Jefferson own slaves and write that all men are created equal?

How many slaves did Jefferson set free?

"Working in the fields was not a happy time," Nash said. "There were long days on the plantation. Enslaved people worked from sunup to sundown six days a week. There was no such thing as a good slave owner."

Meanwhile, Gardiner said the physical evidence shows that Sally Hemings probably lived a higher level lifestyle than other enslaved people on Jefferson's plantation. Still, her room had no windows and would have been dark, damp and uncomfortable.

"I think about the daily life of people in these quarters," Hallock said. "Even though their lives were beyond their control, they were still a family and they shared this space. They would heat up a late meal and huddle by the fire to keep warm when the day was done."

On July 4, Monticello will host its 55th annual Independence Day Celebration and Naturalization Ceremony. Seventy people from more than 30 countries - from Afghanistan to Vietnam – will become U.S. citizens during the Monticello mountaintop event.