Michael Phelps: Here’s a look at the historic career of the greatest Olympian ever 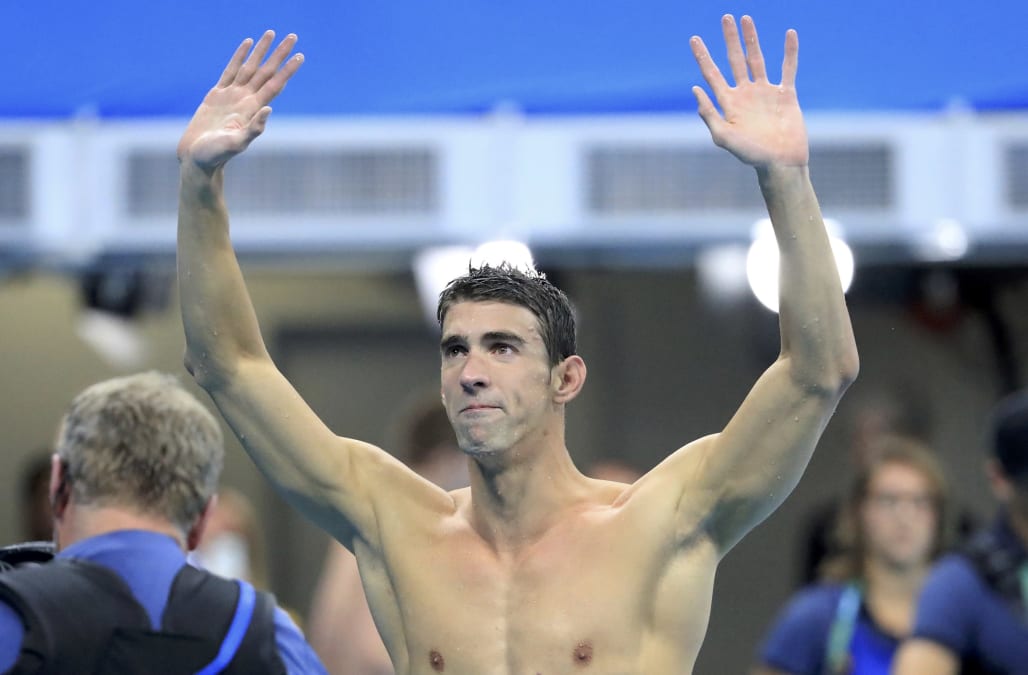 Michael Phelps seems to be enjoying his life in retirement.

After winning 28 Olympic medals, he now seemingly has more endorsements than ever, he has more time to golf, and spends a lot of time just hanging out with his family, including his son Boomer.

He's even planning to race a shark!

Phelps turned 32 on Friday, and while he says he is done winning Olympic medals, there are still a lot of people holding out hope for one more sprint towards glory at the 2020 Tokyo Olympics.

In the meantime, let's take a look back at his storied career:

Phelps started swimming when he was 7, and by the time he was 10 he was setting American age-group records. Many of those records from Phelps’ youth still stand.

Phelps qualified for the Sydney Olympics at just 15, becoming the youngest American swimmer in 68 years to qualify for the Olympics.

In Sydney, he made the final of the 200-meter butterfly and finished fifth.

In 2001, Phelps set his first world record, in the 200-meter butterfly at the World Championship Trials. At just 15 years and 9 months, Phelps became the youngest swimmer to ever set a new world record.

At the ensuing World Championships in Japan, Phelps broke his own world record in the 200-meter fly to win his first world championship.

But it was the 2004 Olympics in Athens that really introduced Phelps onto the larger world athletic stage. In Athens, Phelps won eight medals, including six gold. He was 19.

Phelps then won an Olympic record eight gold medals in eight events at the Beijing Olympics in 2008. In the 200-meter butterfly, he beat Laszlo Cseh by seven-tenths of a second. During the race, his goggles filled with water and he couldn't see anything for the final 100 meters.

In the 100-meter butterfly, Phelps beat Milorad Cavic by one one-hundredth of a second in arguably the most famous swim race ever. Cavic appealed the decision, but Phelps’ gold medal was upheld.

London was supposed to be Phelps' final act, but it was something of a disappointment. Losing to Chad Le Clos in the 200-meter butterfly, usually Phelp's best event, was especially tough.

Still, Phelps picked up four more golds and two silvers in London, making him the most successful swimmer at the 2012 Olympics. After the Olympics, he announced his retirement.

It hasn't been all gold medals and world records for Phelps, though. There's been no shortage of controversies and low points, too. In 2004 Phelps was arrested for a DUI at 19. In 2009, a picture floated of Phelps smoking a bong, which resulted in a suspension from USA swimming and the loss of some endorsements.

After Phelps retired, he said later, he felt suicidal, and has since called 2014 his rock bottom. He eventually entered a rehab facility in Arizona.

Phelps has been coached by Bob Bowman since he was 10, including at the University of Michigan. Their relationship has often been a challenging one, which Phelps has said had to do with his fractured relationship with his father, who left when Phelps was a child.

Bowman and Phelps have often butted heads. Bowman, famously, used to step on Phelps’ goggles before races and practices in order to make him ready for anything, and they reportedly would often scream at each other on the pool deck, or not speak for days.

But Phelps and Bowman are in a good place now, Phelps said. When he and his then-fiancée, former Miss California Nicole Johnson, had a son in May, 2016, they named it Boomer Robert Phelps. The middle name was a dedication to Bowman.

Phelps and Nicole Johnson secretly got married before the Rio Olympics but had a small ceremony in October in Cabo.

Phelps' training and diet have long been the subject of great worldwide fascination. At one point he was rumored to eat roughly 12,000 calories per day, and he works out intensely. Ahead of Rio, he added cupping therapy to his regimen.

Phelps has been called a fish more times than we can count, and his physique is crucial to his success in the water. He is 6-foot-4 with a 6-foot-7 wingspan. He has size-14 feet, and his lungs are twice the size of the average human.

Even just warming up before a race, it was easy to see that he is a physical freak with incredible flexibility and hands that look more like flippers.

Phelps rigorous training included sleeping in a chamber that simulated an altitude of 8,500-9,000 feet. Phelps described it as being like "the boy in the bubble."

Out of the pool, Phelps has enjoyed almost as many endorsement deals as medals. At the height of Phelps' fame, he was sponsored by Visa, Proctor & Gamble, and more, making upwards of $5 million annually in endorsements.

In 2012, it was estimated that Phelps had already made $40 million in his career. That number is certainly much higher now, but it could have been even higher than that. Phelps' agent routinely rejected deals that didn't fit Phelps' lifestyle. "60 Minutes" once caught Phelps reacting to the news that his agent rejected a $5 million deal.

Phelps officially came out of retirement in April of 2014. Leading up to Rio, he said he was finally giving 100% to his training — for the first time in his career.

At Rio, for the first time in his career, Phelps attended the opening ceremony of an Olympic games and his Team USA peers voted him to be their flag-bearer.

Phelps picked up five gold medals in Rio, giving him 23 in his career, the most ever in any sport. He also has 28 career medals overall, making him the most decorated Olympian ever. Nobody else has more than 18.

Phelps has been a bit carefree about his medals. He once showed Anderson Cooper that he keeps his medals in a makeup bag, wrapped in an old t-shirt.

Rio is also when Phelps became a meme, introducing us to "Phelps Face" as his rival Le Clos danced in front of him prior to a race.

Rio also produced this great photo of the moment that Le Clos knew he was doomed in the 200-meter butterfly.

Another chief rival of Phelps has long been Ryan Lochte. However, the pair seemed to grow closer in recent years and even shared a post-race recovery meal in Rio.

But Lochte, who has won 12 Olympic medals of his own, gave a brutally honest assessment of swimming in the shadow of Phelps, saying, "My career would definitely be different. I guess you would say I'd be like the Michael Phelps of swimming if he wasn't there."

Even in retirement, Phelps is still part of the Under Armour family.

He seemingly has more endorsements than ever, including Colgate, Leesa mattresses, and Krave jerky.

He's even helping to promote the "Baywatch" movie.

There's no question he's the best Olympian ever. The only question now is whether he'll really stay retired or if he wants his son to see him compete in 2020. He would be 35 in Tokyo.

It's clear he is still in peak condition and is still working out.

But Phelps also has a lot on his plate these days, including testifying on Capitol Hill during an anti-doping hearing.

Phelps is also an avid golfer. He participated in the Golf Channel's reality show, "The Haney Project" and even signed an endorsement deal with Ping to use their clubs.

But he is also still swimming. As part of this year's "Shark Week" on Discovery Channel, Phelps is going to race a shark. Yes, a shark. He recently dove with some Great Whites for the first time.

But Phelps also has one eye turned towards business. He wants to get involved in the tech industry and invest in start-ups, saying: "I would love to get involved, whether it's in a couple little startups here and there, take a little risk, have some fun and see where it goes."