Trump blasted for sharing video of him beating up CNN 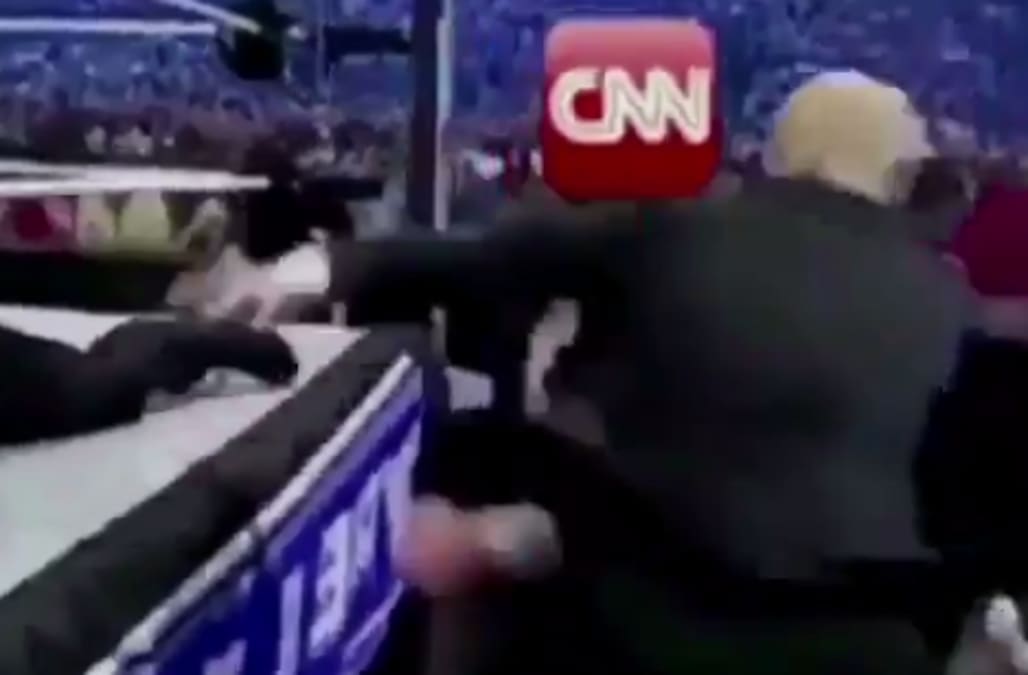 The feud between President Donald Trump and CNN took a turn Sunday morning when the president shared an edited video the appeared to show him beating up the cable news giant in a wrestling match.

The 22-second clip shows Trump jumping onto and punching WWE CEO Vince McMahon -- but in the footage Trump shared, McMahon's face has been replaced by a CNN logo. McMahon's wife Linda McMahon runs the Small Business Administration in the Trump White House.

The original footage is from Trump's 2007 Wrestlemania 23 appearance where the president himself was on the receiving end of a Stone Cold stunner.

The edited clip the president shared on Sunday appears to have originated four days ago on the controversial pro-Trump Reddit forum "the_donald."

The anti-CNN video Trump tweeted showed up on a Reddit thread 4 days ago... https://t.co/0LiYgKvjdf

"Every time I think we hit PEAK... here comes another one," one user tweeted.

Others took the post more seriously with a user saying, "Something is seriously wrong with the President of the United States. We all need to be concerned."

Singer John Legend retweeted the clip from the president and said simply "25th Amendment," referencing the Constitutional amendment that allows for the president to be removed if the vice president and a majority of the cabinet tell Congress that he or she is "unable to discharge the powers and duties of his office."

The president has had a busy holiday weekend on social media, tweeting multiple attacks at the press and his rivals including continuing his feud with the hosts of "Morning Joe." Slamming Joe Scarborough and Mika Brzezinski as "crazy" and "dumb as a rock."

"Crazy Joe Scarborough and dumb as a rock Mika are not bad people, but their low rated show is dominated by their NBC bosses. Too bad!" the president tweeted Saturday morning.

Following the backlash from the tweet Trump defended his Twitter habit from critics who call it not presidential.

"The FAKE & FRAUDULENT NEWS MEDIA is working hard to convince Republicans and others I should not use social media - but remember, I won the 2016 election with interviews, speeches and social media. I had to beat #FakeNews, and did. We will continue to WIN!" Trump said in a series of tweets.

Trump then said his Twitter use is "not Presidential - it's MODERN DAY PRESIDENTIAL."

Health and Human Services Secretary Tom Price on Sunday seemed to deflect questions about the president's tweets saying, "The fact of the matter is that he can do more than one thing at a time," Price said in an interview on NBC's "Meet The Press."

"What I am concentrated on is the job that he's given me and that is to make certain that we fulfill the mission of the Department of Health and Human Services."

But according to a new FOX News poll, 71 percent of voters say Trump's tweets are hurting his agenda, with just 17 percent saying the tweets as helpful.

CNN statement responding to the president: "We will keep doing our jobs. He should start doing his." pic.twitter.com/Gn1YRA2DRG