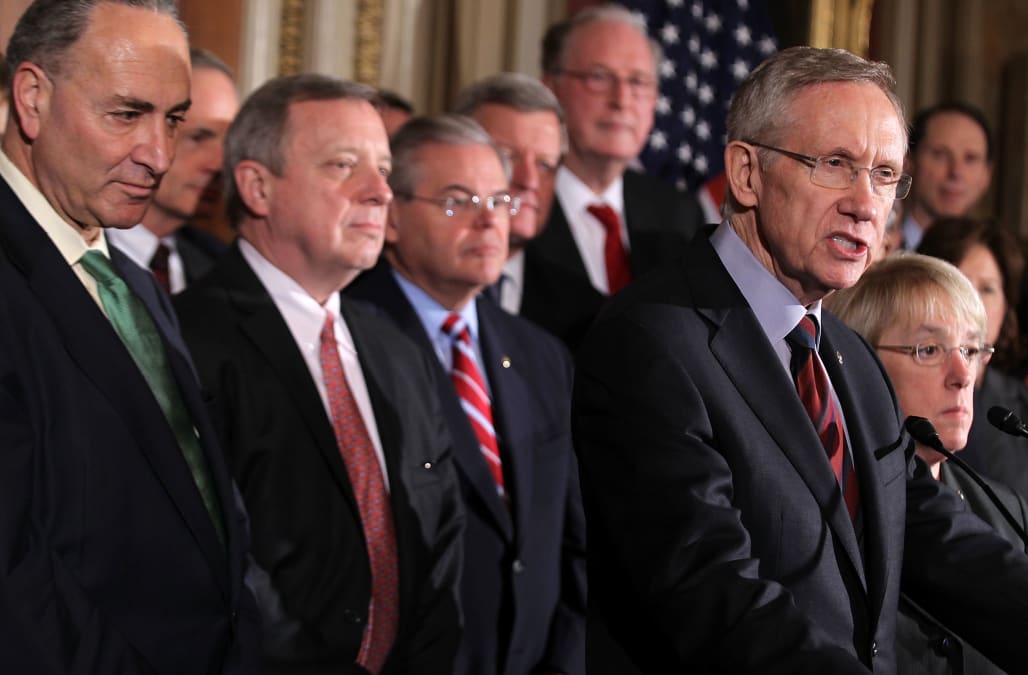 July 2 (Reuters) - Partial government shutdowns in Maine and New Jersey entered a second day on Sunday as lawmakers returned to their respective state capitals in a bid to break budget impasses that have led to the suspension of many nonessential services.

In Maine, a bipartisan legislative committee met in Augusta in hopes of breaking a stalemate between Republican Governor Paul LePage and Democratic lawmakers. The shutdown came after LePage threatened to veto a compromise reached by lawmakers in the state's $7.055 billion, two-year budget.

In New Jersey, the legislature was due to reconvene to resolve a political fight over a controversial bill that Governor Chris Christie said must be passed alongside the state's budget.

RELATED: The most at-risk foods during the government shutdown

The Most At-Risk Foods During The Government Shutdown

The FDA closely watches foods that have exhibited contamination in the past and certain foods have caused more illnesses than others.

A recent multi-drug resistant outbreak of salmonella has sickened 278 people in 17 states. The government has recalled the contaminated chicken and issues a public health alert. The Center for Science in the Public Interest believes this could have been stopped more efficiently had the government been operating normally.

Salmonella lives in the intestinal tracts of chickens, which is why eggs are at high risk for salmonella contamination. Since eggs have caused a whopping 352 outbreaks and 11,163 reported illnesses, it's important to wash them thoroughly and cook them well.

The FDA once discovered lead and arsenic in fruit juice concentrates from Argentina and China. One eight-ounce serving contained three times the amount of lead said to be safe for children.

Berries have been the culprit of over 25 outbreaks and caused 3,397 illnesses. Since they have been linked to contamination in the past, it would be smart to take extra precaution.

Contaminants like salmonella and E. coli have been found in imported cheeses from all over the world. The FDA also keeps an eye out for nitrates in cheese and other dairy products.

In 1986, The DEA discovered herbal tea made from “decocainized coca leaves,” which ended up in Hawaii, Georgia, Chicago and other locations on the East Coast. The FDA has been closely monitoring tea ever since.

Roughly 80 percent of the seafood we eat is imported, hailing from regions in Southeast Asia, which could have more lax regulatory procedures according to Caroline Smith DeWaal of the Center for Science in the Public Interest.

The USDA has prohibited the import of meat from countries with a history of mad cow disease outbreaks; however, this rule doesn’t apply to dietary supplements. The FDA has been keeping a watch for contamination in shipments of supplements.

Leafy greens have caused 363 outbreaks. 13,568 reported illnesses too, which probably because greens are not cooked at a temperature that would kill off bacteria. Norovirus accounted for 64 percent of the cases and comes from unwashed hands.

The FDA has kept a close watch on milk products from China ever since 2008, when thousands of babies became ill from a contaminated formula. The culprit was a chemical called melamine, which is toxic if swallowed. Keep an eye out for products that list milk as an ingredient like yogurt, frozen desserts, chocolate, cakes, cookies, soft candies and beverages.

The FDA is always hard at work making sure our food supply stays safe. Curious about what else the FDA has recalled recently? Read on for more!

Recently the FDA recalled several Angel Food Cake products because they contained soy and milk allergens. The FDA requires foods with potential allergens to be listed on the item. The FDA was concerned that people with allergies or sensitivity toward milk and soy could have potentially fatal reactions, but no illnesses were reported.

The FDA discovered Listeria monocytogenes in several ready-to-eat salads, slaw and dips. The organism can cause very serious and potentially fatal infections in young children, the elderly and people with weakened immune systems, but fortunately no illnesses were reported.

Several frozen pork dumplings were found to contain allergens like shellfish and fish, but no illnesses were brought to the attention of the FDA.

The FDA found unusually high contents of lead -- about 28 parts per million -- in a turmeric spice powder, which they then recalled. High levels of lead are particularly risky to infants, small children and pregnant women.

Several almond butter products were voluntarily recalled when metallic fragments were found in some items. The recall was more of a cautionary measure and no one was harmed from the fragments.

When metallic shavings were found in a few ice creams, a voluntarily recalled occurred on several products and the FDA received no reports of illness.

The FDA found traces of Sibutramine in a dietary supplement, which prompted the company to issue a recall. Sibutramine was removed from US Markets in 2010 because it can increase blood pressure and poses risks for individuals with a history of coronary artery disease, congestive heart failure, stroke or arrhythmias.

The FDA found Salmonella in several red and green bell peppers recently and advised a recall. Salmonella can cause serious infections in young children, the elderly and people with weakened immune systems.

Undeclared soy was found in over 4,000 apple-cinnamon muffins. Since soy can cause bad reactions for those with soy allergies, the product was recalled.

When it was discovered that several smoked fish items were not cooked properly, all of the products were recalled for fear of Clostridium botulinum contamination. This bacterium can cause illness or even death, but there were no illnesses reported.

After House Republicans in Maine voted to reject a compromise deal on Saturday, the Bangor Daily News reported that Republican Minority Leader Ken Fredette presented a $7.1 billion plan he said could get the governor's approval, but some Democrats noted that was costlier than the rejected compromise.

A spokeswoman for the governor could not be reached for comment on Sunday.

"The Speaker thinks it is unconscionable that Maine doesn't have a budget, especially leading into the holiday weekend," Mary-Erin Casale, a spokeswoman for Democratic House Speaker Sara Gideon, said Sunday morning.

If the budget committee meeting on Sunday in Augusta agrees on a deal, the measure would go to the full legislature.

LePage has insisted on a budget with deeper spending cuts than those contemplated by lawmakers and has promised to veto any spending plan that raises taxes.

The stalled budget proposal would have repealed a measure that voters approved in November to impose an additional 3 percent income tax on state residents who earn more than $200,000 a year. But it contained a 1.5 percent increase in the lodging tax, Casale said, while increasing funding for public education by $162 million.

State police, parks and all offices responsible for collecting revenue will operate during the current shutdown, the state's first since 1991.

New Jersey residents were not so lucky. With the July 4 holiday weekend in full swing, the shutdown included the closure of Island State Beach Park, one of New Jersey's few free public beaches, and all other state parks.

Christie was unapologetic when he told reporters he and his family would spend Saturday night at one of the governor's residences at the shuttered beach park.

"That's just the way it goes. Run for governor, and you can have a residence there," he said, when pressed.

At the center of the budget stalemate is a controversial plan that would shake up the state's largest health insurer, Horizon Blue Cross Blue Shield.

Christie says the insurer is not transparent and that a few staff make key decisions in return for high salaries. The proposal would force Horizon to spend some of its reserves on drug addiction and other services.

He has threatened to strike out $150 million in school funding and other items from the budget if the legislature failed to approve the plan.

Christie, a former presidential contender whose reputation was tarnished by the Bridgegate traffic scandal involving some of his closest aides, is already the least popular governor in state history. He is in the last months of his second and final term.

Assembly Speaker Vincent Prieto and other Democrats say the Horizon bill, introduced only on Thursday, is "bad public policy." Prieto said he would vote on the Horizon bill after the budget passed.

Christie blamed Prieto for the shutdown, and the pair traded barbed comments on Twitter but did not meet in person. (Reporting by Elinor Comley in Atlantic City, N.J., and Chris Kenning in Chicago; editing by Frank McGurty and Phil Berlowitz)