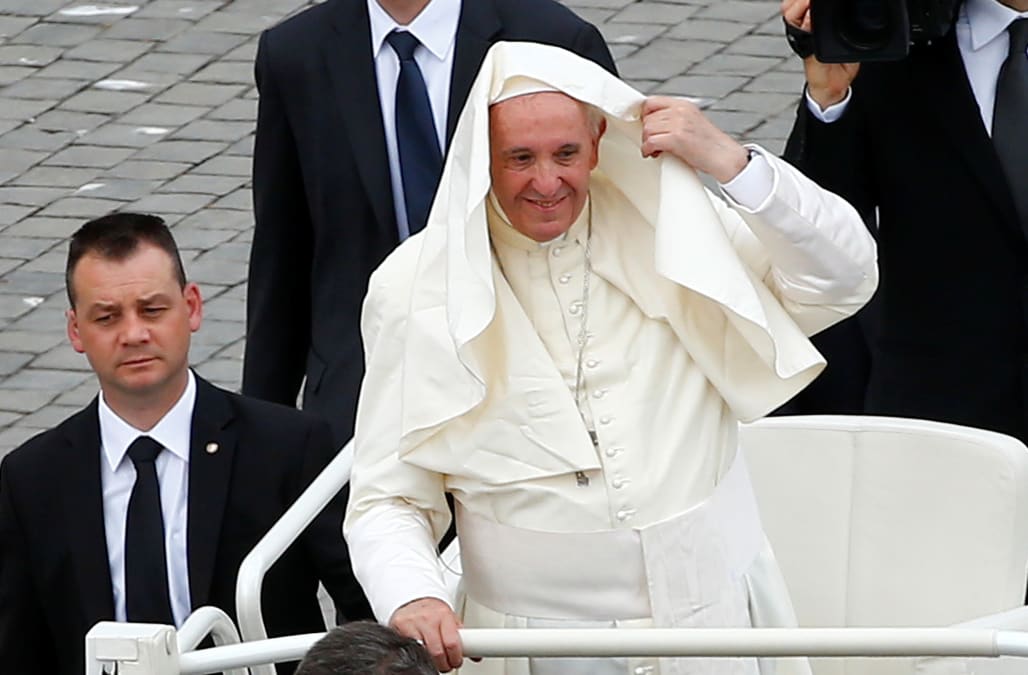 VATICAN CITY, July 1 (Reuters) - In a major shake up of the Vatican's administration on Saturday, Pope Francis replaced Catholicism's top theologian, a conservative German cardinal who has been at odds with the pontiff's vision of a more inclusive Church.

A brief Vatican statement said Cardinal Gerhard Ludwig Mueller's five-year mandate as head of the Congregation for the Doctrine of the Faith, a key department charged with defending Catholic doctrine, would not be renewed.

Reactions to viral Pope and Trump photo
This handmaid's tale theme is dope. https://t.co/ZXEfqDUpv9
tfw when u realize christianity is prob just as oppressive to women but it's too late so you just stand there. https://t.co/8rum89H5KA
Forgive me father for I have sinned. It has been 123 days, 19 hours, and 23 minutes since my inauguration. https://t.co/4iiyI8QA5M
[curb your enthusiasm theme plays] https://t.co/hxWRd1mZor
First still from "Avengers: Infinity War" https://t.co/M9u3OrraxE
When Obama visits Pope Francis vs. when Trump visits Pope Francis #Vatican https://t.co/sHeLtVrK4B
Trump and Pope leaving room for the Holy Spirit https://t.co/L66UtFChEw
The Pope has met Donald Trump... Think this AP picture just about sums it up https://t.co/0E96npzQJa
Pope's face when he found out he has to hear Trump's confession. https://t.co/2fDvKz5v1N
Up Next

Mueller, 69, who was appointed by former Pope Benedict in 2012, will be succeeded by the department's number two, Archbishop Luis Francisco Ladaria Ferrer.

Ladaria, a 73-year-old Spaniard who, like the Argentine pope is a member of the Jesuit order, is said by those who know him to be a soft-spoken person who shuns the limelight. Mueller, by contrast, often appears in the media.

"They speak the same language and Ladaria is someone who is meek. He does not agitate the pope and does not threaten him," said a priest who works in the Vatican and knows both Mueller and Ladaria, asking not to be named.

Since his election in 2013, Francis has given hope to progressives who want him to forge ahead with his vision for a more welcoming Church that concentrates on mercy rather than the strict enforcement of rigid rules they see as antiquated.

Mueller is one of several cardinals in the Vatican who have publicly sparred with the pope.

In 2015 he was among 13 cardinals who signed a secret letter to the pope complaining that a meeting of bishops discussing family issues was stacked in favor of liberals. The letter was leaked, embarrassing the signatories.

"Clearly, the pope and Cardinal Mueller have not been on the same page for five years," the priest said.

Mueller has criticized parts of a 2016 papal treatise called "Amoris Laetitia" (The Joy of Love), a cornerstone document of Francis' attempt to make the 1.2 billion-member Church more inclusive and less condemning.

In it, Francis called for a Church that is less strict and more compassionate towards any "imperfect" members, such as those who divorced and remarried, saying "no one can be condemned forever."

Conservatives have concentrated their criticism on the document's opening to Catholics who divorce and remarry in civil ceremonies, without getting Church annulments.

Under Church law they cannot receive communion unless they abstain from sex with their new partner, because their first marriage is still valid in the eyes of the Church and therefore they are seen to be living in an adulterous state of sin.

In the document the pope sided with progressives who had proposed an "internal forum" in which a priest or bishop decide jointly with the individual on a case-by-case basis if he or she can be fully re-integrated and receive communion.

After the document was published Catholic bishops in some countries, including Germany, enacted guidelines on how priests could allow some divorced and remarried Catholics to receive the sacraments.

But Mueller has said there should be no exceptions, making him a hero to conservatives who have made the issue a rallying point for their opposition to Francis. (Reporting by Philip Pullella; Editing by Helen Popper)