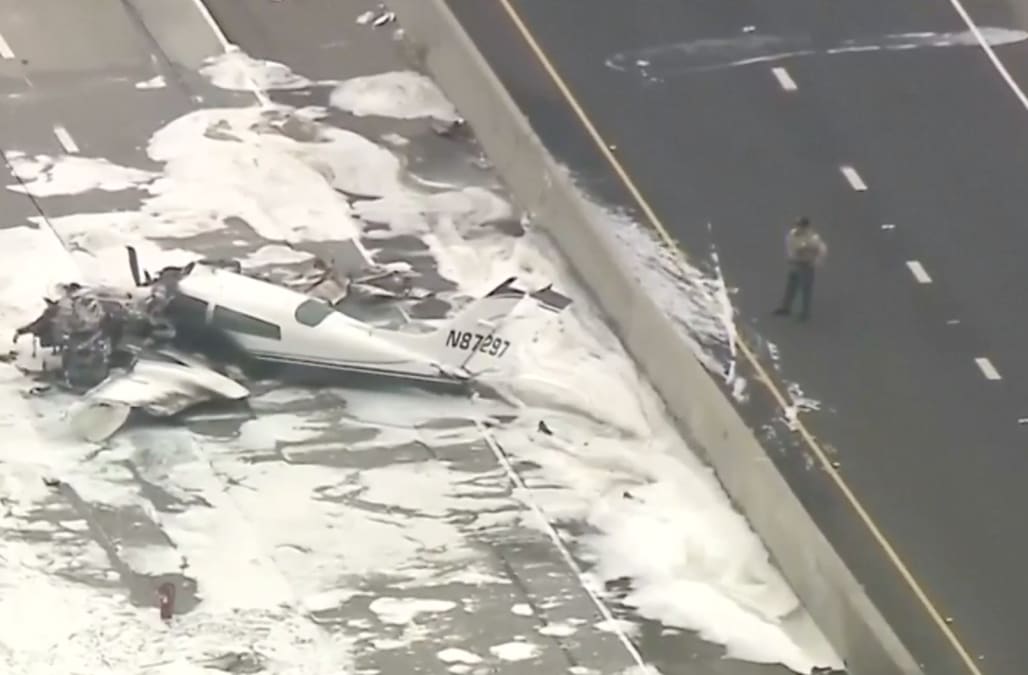 LOS ANGELES, June 30 (Reuters) - A small plane crash-landed on a freeway in Orange County, California, on Friday morning, seriously injuring two people on board and snarling traffic on a major north-south artery through the area, authorities said.

The fiery crash was captured on cell-phone video by a driver and broadcast on local KABC-TV, showing the twin-engine Cessna 310 as it passed low over the northbound side of the San Diego (405) freeway in southern California before slamming into the ground on the southbound lanes.

The aircraft, which appeared to be rapidly losing power, is seen leveling out slightly before it hits the ground and bursts into flames.

Captain Larry Kurtz of the Orange County Fire Authority told KABC that the plane clipped a car on the freeway immediately before crashing at about 9:30 a.m., but the occupants of the vehicle were not hurt.

Television images on local news media showed the wreckage resting in the southbound lanes of the freeway immediately adjacent to John Wayne Airport in Santa Ana, covered in fire-retardant foam and surrounded by police and firefighters.

Arrivals were halted at the airport for about 45 minutes after the crash.

An Orange County sheriff's spokesman said that two people, identified only as a male and female, had been pulled from the wreckage of the plane and were being taken to a nearby hospital with serious injuries.

The freeway, the main north-south route through southern Orange County, was shut in both directions for about an hour before the northbound side and one southbound lane were reopened. Still, traffic remained backed for miles in both directions some two hours after the incident.

The plane was expected to remain on the freeway until it could be inspected by investigators for the National Transportation Safety Board, Federal Aviation Administration and John Wayne Airport.

More from AOL.com:
Woman feared for son's life after he passed out on hot airplane: 'The worst moment of my life'
Study finds US city with the worst drivers
Derailment injures 34 people, halts subway service in Manhattan