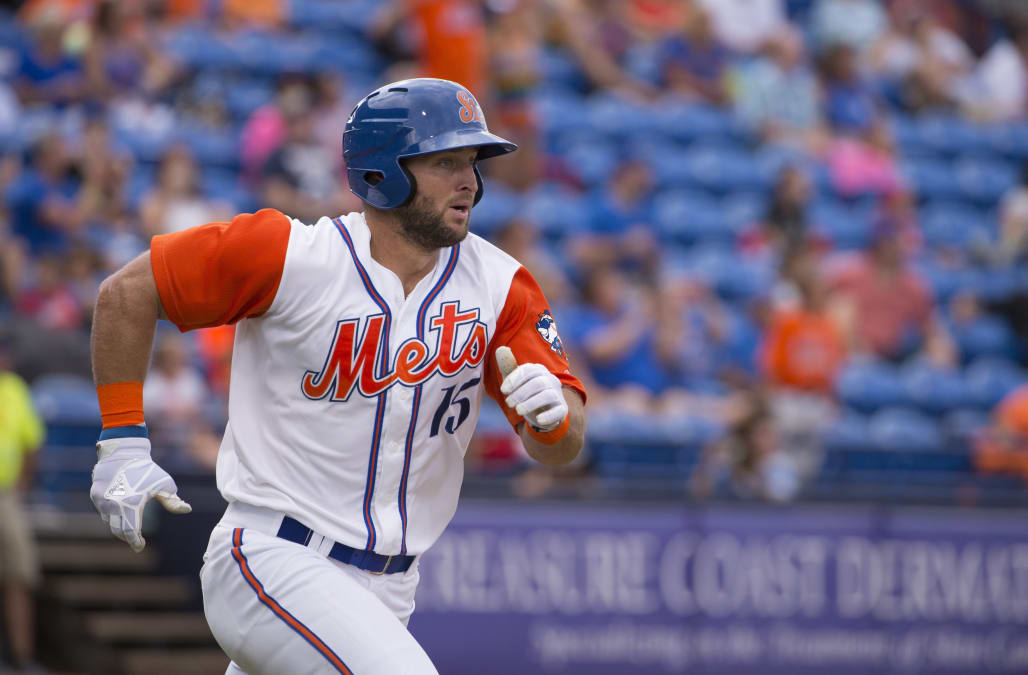 Tim Tebow made an impressive debut with the St. Lucie Mets on Wednesday.

After being promoted from the Columbia Fireflies, the Mets' low-single-A minor league affiliate, on Sunday, Tebow homered in the second game of a doubleheader for St. Lucie.

Tebow also hit a single, finishing the two games 3-for-5 with the homer, two RBIs, and a walk. The Mets lost both games.

It didn't take Tim Tebow long to get his first home run since his promotion to high-A ball. pic.twitter.com/nuE9jNZ0vw

Tim Tebow and other multisport pro athletes
EAST RUTHERFORD, NJ - SEPTEMBER 03: Quarterback Tim Tebow #11 of the Philadelphia Eagles warms up on the sidelines against the New York Jets in the third quarter during a pre-season game at MetLife Stadium on September 3, 2015 in East Rutherford, New Jersey. (Photo by Rich Schultz /Getty Images)
SACRAMENTO, CA - NOVEMBER 14: Michael Jordan #23 of the Chicago Bulls dunks against Rodney McCray #22 of the Sacramento Kings during a game played on November 14, 1989 at the Arco Arena in Sacramento, California. NOTE TO USER: User expressly acknowledges and agrees that, by downloading and or using this photograph, User is consenting to the terms and conditions of the Getty Images License Agreement. Mandatory Copyright Notice: Copyright 1989 NBAE (Photo by Rocky Widner/NBAE via Getty Images)
SARATOSA, UNITED STATES: Ex-Chicago Bulls standout Michael Jordan warms up 15 February 1994 in Saratosa, FL, before his first spring training workout with the Chicago White Sox. The retired basketball superstar is hoping to win a spot on the major league team. (Photo credit should read ROBERT SULLIVAN/AFP/Getty Images)
TEMPE, AZ - JANUARY 28: Dallas Cowboys cornerback Deion Sanders hoists the Vince Lombardi Super Bowl trophy as he walks off the field to the locker room after defeating the Pittsburgh Steelers 28 January during Super Bowl XXX at Sun Devil Stadium in Tempe, Arizona. The Cowboys won 27-17. (Photo credit should read VINCE BUCCI/AFP/Getty Images)
PITTSBURGH - 1997: Outfielder Deion Sanders #21 of the Cincinnati Reds smiles as he prepares to bat against the Pittsburgh Pirates at Three Rivers Stadium in 1997 in Pittsburgh, Pennsylvania. Sanders also played defensive back for the National Football League Dallas Cowboys during the 1997 NFL season. (Photo by George Gojkovich/Getty Images)
JULY - 1987: Bo Jackson #16 of the Kansas City Royals stands ready at the plate inside the batting cage during practice in July of 1987. (Photo by Gray Mortimore/Getty Images)
1989: LOS ANGELES RAIDERS RUNNING BACK BO JACKSON CARRIES THE FOOTBALL DURING THE RAIDERS VERSUS KANSAS CITY CHIEFS GAME AT THE MEMORIAL COLISEUM IN LOS ANGELES, CALIFORNIA. MANDATORY CREDIT: MIKE POWELL/ALLSPORT
Up Next

Tebow also hit a home run in his first game with the Fireflies in April.

NOW WATCH: Here's a simple no-weights workout that could lead to real results

More from Business Insider:
The 3 plays in sports everybody will be talking about today
Phil Jackson reportedly was falling 'in and out of sleep' at a workout for one of the top NBA draft prospects
Steve Kerr wants the Warriors to consider positive ramifications of going to Trump White House but admits they may not get invited over criticism