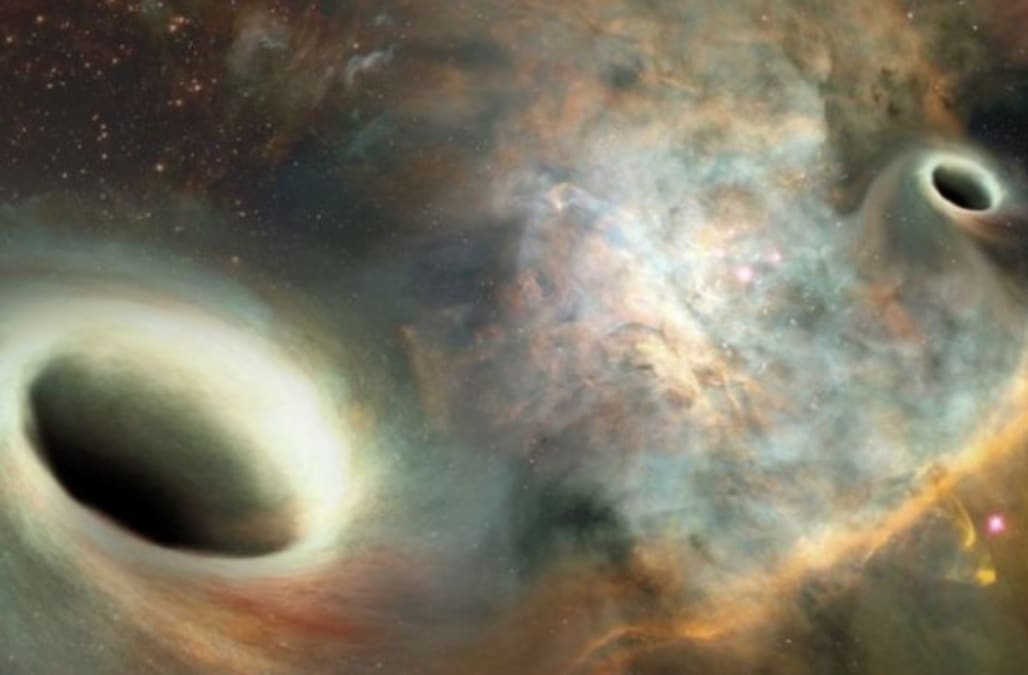 Black holes need love too. Astronomers detected a pair of supermassive black holes 750 million light-years away from Earth in a separate giant galaxy. Courtesy of the National Science Foundation's Very Long Baseline Array's (VLBA) radio vision, a continent-wide system consisting of 10 radio telescopes, data on the orbital motion of the black holes has been captured.

Together, the two black holes have a combined mass that is 15 billion times the mass of the Sun, which is 1.989 x 10^30 kilograms or 330,000 times the mass of Earth. But most galaxies have supermassive black holes that are millions or billions times larger than the Sun at their core. What makes these two black holes unique is their distance from one another: They're relatively close to each other with only 24 light-years of distance between them.

"The black holes are at a separation of about seven parsecs, which is the closest together that two supermassive black holes have ever been seen before," Karishma Bansal, a graduate student at University of New Mexico (UNM) and lead author of the paper, said in a statement. They're friends!

Since these two black holes are at the center of a single galaxy, the astronomers believe two galaxies merged at some point to become one elliptical galaxy. It was discovered in 1995 and is called 0402+379; its name is derived from its location in the sky. Taylor and his team first figured out the galaxy has two supermassive black holes back in 2006.

Equipped with existing data from 2003 and 2005, and new observations from 2009 and 2015, Taylor and his colleagues were able to reanalyze VLBA data. Their findings, published in the Astrophysical Journal, confirmed the two black holes are orbiting each other. Their preliminary estimates suggest it takes 30,000 years to complete a single orbit — it moves at one micro-arcsecond per year.

"This is the first pair of black holes to be seen as separate objects that are moving with respect to each other, and thus makes this the first black-hole 'visual binary,'" Greg Taylor of the UNM said in a statement.

What's more, the two black holes could merge with each other at some point in time, though not anytime soon. According to Bansal, it would be at least millions of years down the line for a merger to take place, if ever. Since the two black holes are ever-so-slowly orbiting one another, the scientists believe it would require an external added force to catalyze the merger of the black holes. Should this manage to happen, it would result in "a burst of gravitational radiation" that would send gravitational waves throughout the universe.

Observations like these are essential to understanding black holes; specifically: how they merge, how mergers impact galaxies and how astronomers can find other similar merged galaxies.

"We need to continue observing this galaxy to improve our understanding of the orbit, and of the masses of the black holes," Taylor said. "This pair of black holes offers us our first chance to study how such systems interact."

The goal now is to find other binary black-hole systems in the universe. Since merging galaxies are not uncommon, according to astronomers, they believe other binary pairs should exist.

"Now that we've been able to measure orbital motion in one such pair, we're encouraged to seek other, similar pairs," Bansal said. "We may find others that are easier to study."

More from Mic.com:
Anonymous just claimed NASA found intelligent alien life. Here's the truth.
Scientists may have discovered hidden planet in our solar system
The Hubble Telescope just took pictures of a galaxy twice as massive as the Milky Way