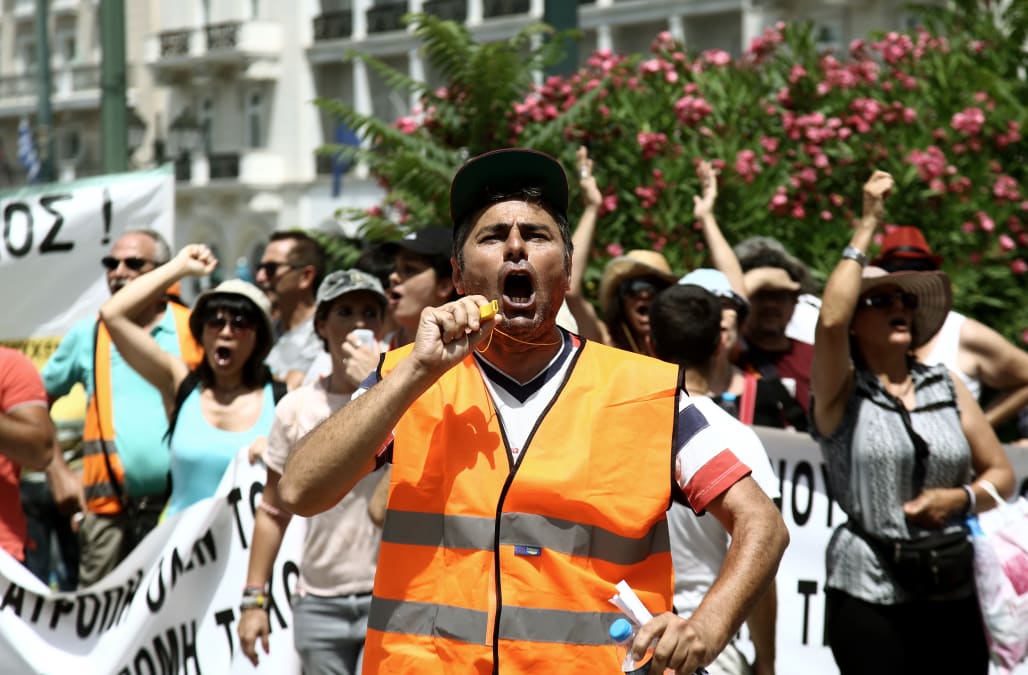 ATHENS (Reuters) - Hundreds of striking Greek sanitation workers protested in Athens on Thursday over jobs as steaming mountains of garbage piled up across the country as a 10-day strike dragged on.

Heaps of rotting rubbish have been steadily growing in Athens neighborhoods, raising fears of health risks as the country swelters in its first heatwave of the year.

Check out the photos below:

With temperatures above 40 degrees (104 Fahrenheit) in some parts of the country, public sanitation workers who say their jobs are under threat marched through central Athens, many of them wearing their fluorescent work vests.

Some chanted "Tsipras your contract is up," a reference to Greek Prime Minister Alexis Tsipras, whose creditor-mandated austerity has seen him trailing in opinion polls.

"We want them (the government) to meet their promises. They promised to give us permanent jobs," said one worker, Marina Tsoukala, 57.

"I'm close to pensionable age ... what private company would take us on?"

Job security is a sensitive issue in Greece, where one in four is unemployed as the country wrestles with its seventh year of austerity sought by international creditors in return for bailouts.

With temperatures soaring, Athenians were advised to keep rubbish indoors to avoid it becoming fodder for rodents out on the streets.

However, many neighborhoods were struggling with piles of trash overflowing from large wheelie bins.

"Its simply intolerable," said a woman who only identified herself as Vassiliki, 40.

"I live on the fifth floor and the stench wafts up there. There are mosquitoes and flies, the smell is just awful."

More from AOL.com:
Nigeria will pass US as third most populated country by 2050
In Old Tbilisi, regeneration overshadows Eurasia's ancient crossroads